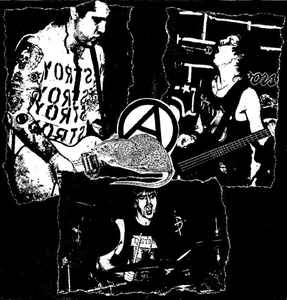 Snotty and raw as fuck punk greatness. I present you with the awesomeness of Neutron Rats.

1. Could you give me a brief history of your band, its name and what releases you have?

Colin: Brendan and I used to play in a project with an unceremonious demise, so after a couple years of boredom decided to slap some new shit together with this wildman on drums who had been drunking around.

Brendan: Neutron Rats started and played our first show in Albany New York in the summer of 2009 in a very hot and sweaty basement, after that we toured most of Americas states and territories (sorry Idaho and Puerto Rico!) and released several records and tapes. The name was something Colin and I came up with before we even started the band. At first we thought it sounded like a 77 rock n roll band but I think after all these years it fits us. haha

Brendan: And a few comps too

2. What drew you to hardcore/punk/metal and what about it is rewarding and a sustaining genre of music to you?

Colin: Nothing else really ever felt right growing up, but after the first show I went to I knew that was it for me. I had never felt that kind of frantic energy before. Harmony through chaos.

Brendan: It was just harder and crazier then anything else i'd ever heard and I really liked that.

Dan: Skateboarding was the link to finding punk for me. There was usually good tunes in the videos and a punk attitude in it already. Eventually, I went to a show and it opened up a new world for me. It has been a huge part of my life ever since, most likely because I still can't find anything better to do then playing a show with friends and drinking too much beer.

3. Devil's Horns firmly believes that music and art is the best crossover in the universe, how does that work for you as a band?

Colin: Our music has always been influenced by other forms of media, especially film.

Dan: I agree, its great to sit down with a record and check out the album artwork. I think it can add another dimension to a band having some killer visuals.

4. Live how does your music translate? Do you have a message or what rewards you?

Colin: This band is definitely a live band, until our LP I don't think any of our recordings ever did us any justice.

Dan: I play all the songs even faster than I am supposed to but it generally works out well! I think the latest LP reflects our live sound the best out of any previous recordings.

Colin: NR always had a bleak message with content dealing with images of a dystopian future, total war, personal failures, societal failures, and fast food jingles. The reward is the fat fucking checks we get to cash from Carl's Jr. 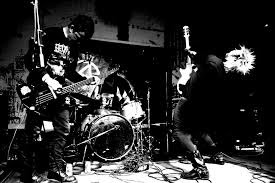 5. Any upcoming releases you would like to tell us about?

Colin: We just put out our swan song, the 10 track Primitive Past//Nuclear Future LP, and I think we couldn't be happier with the outcome.

Dan: But we all have side projects that have newer and upcoming releases. Colin and I just started a new project, Wet Specimens, that released a demo and has more to come soon. Brendan is in a band called Male Patterns that just released an LP. I am also in a band called Mystery Girl that has a new 7" coming out on Feral Kid records this fall.

6. What are the highlights for you as a band so far?

Colin: We've had the chance to travel and share the stage with so many passionate and talented musicians who work hard to play some killer shit. I've also laughed harder than I've ever laughed in my life spending weeks at a time in a van with these knuckleheads.

Brendan: Yea seriously, Colin. There are a lot of highlights, too many to mention but some shows like the Rochester punks picnic where people nearly burned the pavilion down when we played was ridiculous. Playing on top of a monster truck-esque dirt pile in Lynchburg Virginia was fun, Karaoke in Tulsa, Sharkael Myers, I don't know. We've been treated like family in a lot of cities far from home and we've been really lucky to have so many good times. I know for sure I couldn't tour the lengths we toured with any other guys or laugh as much or do what we did and do with any other guys.

7. On the flipside, the struggles and challenges?

Colin: Spending weeks at a time in a van with these knuckleheads.

Colin: Really though we do get along great on the road, but man after 10 years of sleeping on floors you'd think it wouldn't be so hard on the back. Being from Albany has put us off the beaten path a bit, so we've had to tour hard to get our music out there. A lot of nights with no sleep to drive hours home for work in the morning.

Brendan: My back and bass playing shoulder hurt from being such a dynamo on the bass. Its a struggle, a challenge, and a curse.

8. Any favorite current artists or particular albums you have on rotation?

Colin: I can't get enough of the Dove "What's to Gain?" cassette or the Drool demo, but I was just recently blown away by hearing what I think is a one man band from Italy called A Culture of Killing which is killer anarcho/peace punk like the Mob or A Touch of Hysteria.

Brendan: I've been into Dog Soldier's "Absolute Epic Horrors" LP lately, that band is great and one of my favorites. "Hit em High" off the Space Jam soundtrack finds its way to my speakers pretty often too.

9. What are the future plans for you?

Dan: We are planning a 2 and a half week tour in Europe coming up in September that we are very excited about!

Colin: I'm going to clog every toilet in the EU, and then call it a day.
10. Any final words or messages?

Colin: Thanks for the interview 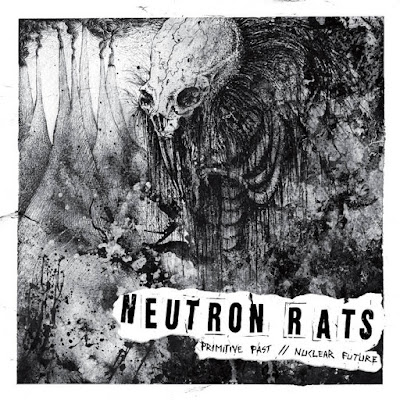 Raw, crusty punk is a favorite for the writer and Neutron Rats have released this gem of an album.

No let up at all, raging drums/vocals/guitar all sprinting towards a hellish annihilation. I loved the helter-skelter scattergun that real punk exhibits.

This album is as great as the classic Discharge/AntiCimex/Disorder albums; without a doubt.10 tracks of exceptional, face melting angry crust punk.

Highlights were the title track, Internet Age and Dead Languages. Special note to the solid,topical quality lyrics; an integral part of music with integrity.

Album is out now.