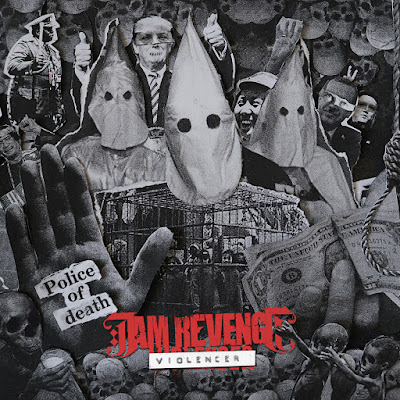 I am Revenge-Violencer album review by Mark Jenkins.


In a recent post, I raised a slight concern that too much generic beatdown was coming out of Europe. Thank you I am Revenge for lifting me out of this opinion. First off, what an album cover, it’s like out of late 80’s/early 90’s hardcore punk album art, so incredible. Being an ex-punk, I absolutely worshipped the lyrical content that was both topical and hard-hitting. Calling out racism and injustice should be an essential part of an artist with credibility.

Now the tunes. Ok, the definitive basis of the songs is definitely beatdown; however, I feel there is a strong dynamic based on both thrash and death metal (anyone who reads my posts knows it’s my weakness/love) and it carries the album to a higher rated place. Plus, this album reminds me of the last Crowned Kings album which absolutely floored me. Tracks like Truth or War and Self Deception are epically crushing, but catchy as hell. Decent lyrics and savage as hell production. The last track was the mad highlight: Tough ain’t Enough with two guests which created a classic track that reminds me of Body Count meets Obituary. Alex from Malevolence stars on another track; No alternative which is almost as sensational as that.
Now I loved this album, but I felt it was overlong by at least two tracks. 9 tracks of sheer brutality would have been better, but that’s me searching for any negatives here. It’s an album that actually gets better which each listen. Hence a solid 4/5.
This sonic warhead launches Sept 7th, buy it or die!
https://www.facebook.com/iamrevengehc/
watch these clips:
https://www.facebook.com/iamrevengehc/videos/2077546065620066/
https://www.facebook.com/iamrevengehc/videos/1975011029206904/