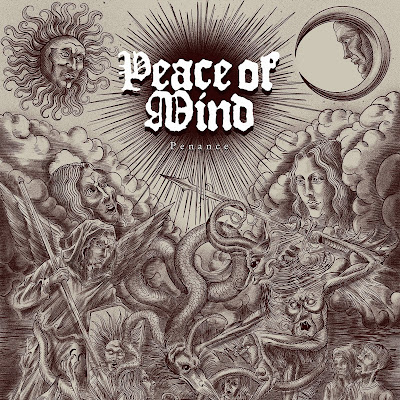 Peace of Mind- Penance album review by Mark Jenkins.
Moshcore, Crossover or whatever: Peace of Mind are welcome in my ears anytime. Abrasive, catchy and hectic are all their skills jumping out on this stellar debut album. It kind of reminds me of Full of Hell if they were cross bred with Municipal Waste, not too shabby eh. The tracks never stay around too long, but wow do they hit you in the face. Why waste time, when as a musician you can simply start a killing spree in like 3 mins.
Are Peace of Mind super innovative or original? no but frankly who gives a fuck. This is music to mosh and spin kick your mates face in with. The tracks are nasty as and the real strong and original vocal style drives the album on with each song. Cover art is amazing and matches the furious nature and tone of the entire album.
Highlights: Impaler, How does it feel and Deity. All hard as hell and absolute bangers, not that this album has any weak tracks.
4/5 and looking forward to their future albums given the excellence shown on this awesome debut.