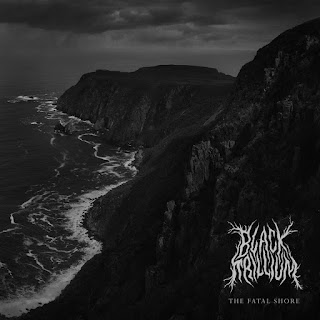 If you thought 2019 was a decent year for music, you can forget that; as 2020 is shaping up as a deeply sensational year in terms of phenomenal musical releases. Black Trillium is one of the artists shaping our year with the flawless and bloodthirsty opus that is The Fatal Shore.

Background: Black Trillium is a dark & deeply creative death/doom metal act from Sydney that have been brewing up raw, emotive, and incredibly dynamic sonic offerings since 2010. While it’s been a while since we’ve heard from the duo, with 2020 marking 10 years for the band. This voluminous force is a death/doom metal collaboration between Simon Skipper (guitar, vocals) and Zachary Carlsson (vocals, bass), formed from their mutual interest in the brooding aesthetics and darkest aspects of the metal genre. It is predominantly a studio-based project, but critics and fans alike will beg this to be a live band once hearing this masterpiece.

What is going to assault your ears is a gloomy, moody, and weighty mix of black/death and doom metal that is seldom executed this effectively from our shores. Indeed, it's only five tracks, but every track takes you on an exquisitely dark and atmospheric journey of metal glorification. Listen just once to Haunted Oceans or Banished and you will not only be playing air guitar (and drums), but you will replay sections to refresh your memory if the type of audio wizardry you heard actually happened. Yes, it did and this album is full of astonishing and frankly magical moments. This release has riffs as big as Sabbath, a wide and staggering range of vocals that will floor you. Not only will you all hail the heart-stopping skill level of this band, but you will also be fatigued by the album as it entraps you in its engrossing atmosphere and refuses to let you go. I can honestly say few albums do this for me at all. So you need this album, as it's truly both original and heavy as hell. Too often artists settle for mediocrity, Black Trillium is dedicated to their craft and are true metal artisans.