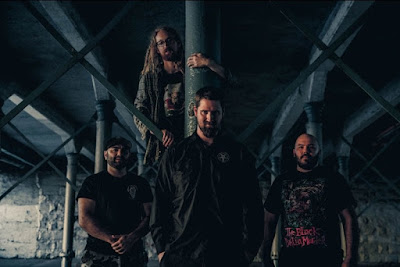 Last week we reviewed this killer band's sick EP Empire which is absolutely essential and heavy as hell. When we had the chance to interview this band, we jumped at it. Because post-COVID-19 this band is going to stomp your face on the live front.

We chatted with Chaise, their guitarist, and really appreciated the detailed and well thought out answers. Sadly this is lacking in so many bands, Chaise was a real open book and that really fits in with the genuine spirit of this band. This band deserves the credit they are getting because they are clearly masters of their genre. Great band and passionate as hell.

1-Give us the history of this hell heavy band and also how you come up with the name?

Dave (drummer), Brendan (other guitarist) and I are good mates from high school growing up together in Mildura (North West Victoria).  We started the band a little while after moving down to Melbourne – sometime around 2010ish (side note: it took at least a year of drunken discussions at house parties before we had our first jam).  We were all right into the American metalcore movement (Killswitch, As I Lay Dying, Lamb of God, etc) when we started writing so I guess those bands were our strongest influence at the time, on top of all the other bands we’re into – metal and non-metal.  We rounded out the lineup eventually and started playing fairly regularly around Melbourne and Did our first EP, ‘Your own hell’, in 2013.  Toured across Victoria a lot and over to Adelaide a couple times and started gathering some decent momentum.  We then decided to record an album (LP) rather than another EP.  In 2015 we booked the studio, paid the deposit, mapped out the tracking schedule, had about 15 + songs written.  About 2 months out from tracking, our singer left for family reasons.  We thought we’d find a new singer and get back to it quickly – NOPE!  For next 12 – 15 months, we had a heap of bites but could not find a suitable singer for the life of us – and not from lack of trying.  We eventually reached out to Dan who was in Frakenbok at the time.  He agreed to help us out as best he could around his band and work commitments.  We then recorded this EP, ‘Empire’, over the next year or so to work around that.  Dan eventually left the Bok and committed to us fulltime which then kicked things into gear and got us rolling again.  We did a huge body of work late 2019/early 2020 to get ready to release the new EP then BANG – Coronavirus!  We pushed ahead with the release anyway as we’d sat on it for over a year already.  Once everything calms down, we’re looking forward to getting out and playing these new tunes for you all!
Band name origins:  Not really an interesting story here.  We finally got ready to start playing gigs, booked our first show, and was still debating band names like crazy with absolutely no success (although we were very close on a couple of names).  The gig poster artwork was overdue and we had to land on something quick-smart!  We basically polled a handful of band names to all our mates and Armoured Earth was the most popular.  We then googled ‘Armoured Earth’ and it wasn’t taken so that became our band name!

2-Tell me what you feel are your biggest influences, because I think you have many, but still the overall sound is very fresh and original?

Thanks mate – we try super hard NOT to sound like any one particular band or style of metal so I appreciate your kind feedback here.  I touched a bit on our main influences in the previous question but between all of us, there must be thousands of bands that we listen to – and a lot of them aren’t metal at all.  Whenever we write, we just throw our top 10 or so bands we’re listening to at that point of time into the ‘blender’ and see what comes out basically – like most bands, I guess.  However, if you put a gun to my head and asked who our biggest influence is – definitely Pantera! 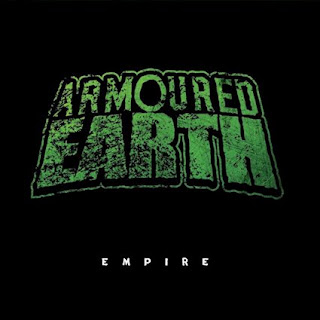 3-The songwriting on the latest cracking release, Empire is exceptionally strong and it’s even heavier and one may suggest even more confident-it really sounds like a tight unit and really heavily cohesive and gripping, give me the background to the EP and its aims?

Thanks mate! These songs came from the original bank of 15 we had written for the album so they had been written over a couple years and were complete (minus vocals) for quite a while.  We had originally set out to do 7 tracks, however, after about 5 days of tracking, we realized it was going to take twice as long as we originally had planned and budgeted for.  Studio costs were 500 odd bucks a day so we made the call to cut 2 songs so we didn’t have to eat 2 minute noodles for the foreseeable future!  Haha we did manage to get drum tracks for those 2 cut songs though so maybe we’ll finish them one day.
Our writing process is the song starts out on guitar and are written by either myself or Brendan, we’ll demo it and send it around to the others to learn, we’ll then bring it to full rehearsal and jam it out a million times, tinkering with it along the way until we’re happy with it.  This was our ‘2nd batch’ of writing since the first EP so we reflected on what elements and processes worked well on the first batch of writing and tried to really amplify that and add some new flavor to it through new members and new influences.
We only had 2 aims for this EP:  To improve and evolve the songs a little bit from the first EP.  Simple as that.  Dave, Brendan and I have been playing and writing together for a long time, even before Armoured Earth, so I think we’ve kind of just grown into a nice tight unit.  Add to that the super talented lads, Julian (bass) and Dan (Vocals), who came on board in time for this EP, I think that’s why it sounds go generic and cohesive.  Julian Renzo (ex Jack the Stripper guitarist) at Legion studios tracked, co-produced and mixed this sucker and did a phenomenal job also!  He does everything proper and old school, no short cuts.

4-What are your fave songs off this release and are their plans for an album, I mean after this EP fans will demand a full album!!

Well this one was supposed to be an album!  Haha, who knows? what the next release will look like, the landscape in the industry is changing constantly.  Our PR guy, Chris Maric was telling me that releasing your album as singles over a longer period of time is something to seriously consider these days and he’s probably right.  Bands appear to be sort of heading that way – release 3 or 4 singles before the album rather than just the 1 single like the old days.  I’m old school though, I like the whole thing in one hit – EP or LP.  A full length follow up would be great but they cost twice as much as an EP so we’ll cross that bridge when it comes.
My favorite songs are Fracture and Degradation to Vanity because they showcase everything we’re about.  The boys probably have different favorites no doubt.  Right now though, I’ll say our favorite song as a collective is the one that gets the most bloody streams!!!! haha

5-Once this COVID-19 passes what are your plans for touring etc?

We were literally 2 weeks away from our EP launch gig in Melbourne and a bit of a tour on the back of that when COVID-19 hit.  Once we’re aloud out again and the pubs reopen, I think we’ll aim to play reasonably regularly again - 1 or 2 weekends a month, something like that, anywhere across Australia that will have us.  We’ve been stagnant for so ages now so we’ll be itching to hit the stage like crazy!  We haven’t’ got up to Brisbane to play yet so if anyone up that way is tuning into this, hook us up please!  haha 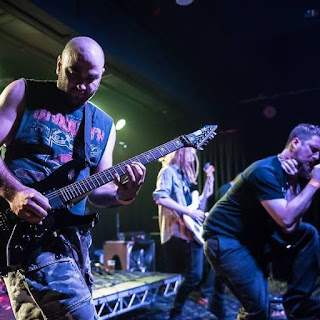 6-How did you get into metal?

Simple – I discovered the Black album (Metallica) around 1998/99.  My mum’s partner at the time had it in his collection so I threw in the cd player, hit play and the rest is history.  The heaviest bands my friends and family listened to were like ACDC, Greenday, Nirvana, etc.  Most of the music I had access to was top 40 shit (which had its moments).  Once I discovered the black album, my musical world was tipped on its fucking head!  Haha, I then discovered the metal hour on Rage and started taping that.  Then later on – Alive or Just Breathing (Killswitch Engage) tipped my heavy metal world on its fucking head!  God damn, that album was groundbreaking – the perfect blend of metal and melody IMO.  The production was also ahead of its time.

7-Why is it such a sustaining and rewarding genre?

I think it’s the serious amount of talent and diversity within the genre.  It’s real music that challenges you for the most part, and it’s growing, evolving, and diversifying by the day (which I love!).
I also I think it’s a great outlet.  I’ve never been in a punch up in my life and I put it down to heavy metal and playing music as amazing therapy outlets.
There are so many reasons though, I could go on forever here!

8-Let’s chat about the lyrical themes from this release; because what I can hear are absolutely solid and really relatable.

Thanks mate, good to hear that you can relate to them.  Dan writes about 90% of our lyrics and I help him out here and there.  I think he has a bit of a social or mental health kind of theme (among others) in mind when writing but tries to keep it a little open for the listeners own interpretation, which I really like too.
Funny story:   When Dan first jumped on board with us, he asked me what to write about.  I said anything except breaking up with your girlfriend or anything emo like that… so the first track on the EP ‘Over the edge’ was the first song he wrote with us and is about breaking up with one of his ex-girlfriends… fucker!  haha

9-How’s the state of Aussie and Melbourne metal at the moment we have such amazing and solid bands wouldn’t you agree?

Yes – totally agree, we’re super blessed to have so many good bands down here!  The best thing about it is it’s so diverse.  We’ve got everything from the old-school thrashers to the super heavy moodier new stuff!  I love it all man it’s the best thing about living in Melbourne.  The talent you get for a 10 – 20 buck local gig is amazing.

10- any final messages or words of wisdom to the readers?

Be safe and stay the fuck at home so we can have gigs back in our lives again!   And go listen to our new EP on Spotify please 😊, cheers.

Hit the boys up for gigs post COVID-19 and definitely get their latest heavy and brilliant EP Empire now: