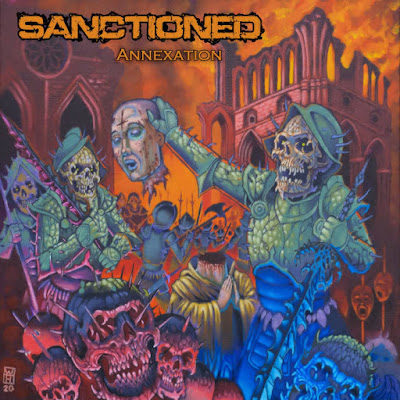 FFO: 90's Grindcore with a solid hardcore foundation.
Sanctioned is a solid three-piece band made up of seasoned players in the Australian metal/hardcore community. And indeed their experience shines in the brilliantly brutal document that is Annexation. From the phenomenal and uncompromising album art to the stellar production; this album is exceptionally ill-tempered and at the same time is captivating. The intersection between brutality and melody seems to be the prime objective here. Overall, the band has a musical style that drifts very confidently between 90's Grindcore (harking back to the crust influenced grindcore that we purists hold so dear) and hardcore. 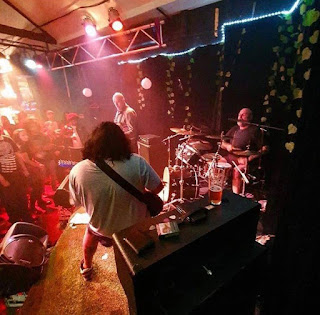 They blatantly declare their love of fantastic bands like His Hero is Gone, Assuck and Disrupt, but this is only a small part of their overall sound. It is fair to say what they have created is refreshingly original. The band members tastes are pretty diverse and this is what makes this band stand out. Blazing guitar work is utterly crushing and reminded me of Terrorizer/Hatred Surge/Doom/Extreme Noise Terror, but other tracks have supreme riffs that are definitely influenced by old school NYHC, powerviolence and crust punk. And this dirty and gritty crust edge isn't that the generic, boringly repetitive version that currently exists. There was a time when the underground embraced that melting point of extreme music where hardcore/punk was influenced by grindcore and death metal, and vice versa. Bands even in Australia produced devastatingly hectic music that slaughtered your ears; bands like Omnicide, Warp Spasm, Subversion, Warsore etc. This is a point worth making simply because Sanctioned doesn't function as a tribute band to these soundscapes; they take these influences and hone them into a sonic sledgehammer.
Annexation is 15 tracks of pulverizing extreme music that is made to play live. Opener Void wastes no time on showing you the band is not here to piss about, machine-gun drumming and vocals that work as a bruising instrument perfectly blend with nasty guitar-work and thunderous bass lines. This is just a taster of the audio violence to come. Humanity is the second track and despite being the album's second-longest track flys by in the blink of an eye. It's like Jay has a hive of wasps in his vocal cords and our ears are the better for it. This track has a killer blasty ending to it and makes it's an absolute highlight of this release. Rather than scream the virtues of every single track(which is easily done, but would end up being a fucking essay instead of a review), I'll highlight the most memorable moments for me as a listener. The whole album is punishing and there are no bland or filler songs. 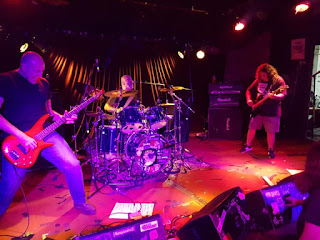 Toxic is another amazing track (video link below) that that just grabs your attention and lyrically and musically is simply jaw-dropping. One of the best tracks on this album easily. Other tracks like Faceless, Television, Jaundice, Punch Drunk(Husker Du cover), Cell and Fraud are breakneck mosh tracks that are completely bonkers and well written ripping songs that take me back to the unhinged chaos of classic venues like The Arthouse, Melbourne. It's a sure sign of truly gifted musicians when you can cram in pure aggression, clever hooks, quality lyrics and masterful tempo changes in such shortish tracks. Other striking tracks from this release are: Blocked which blurs magnificently the lines between amazing harmony and overpowering grind, Whirlwind that has titanic death metal detail and dynamics that creates a total cacophony of hellish tone personified and the instrumental title track which reminds me of Warp Spasm and they would be insane not to open every gig with this chilling and brooding song.
Stress is the album closer and my favourite track on this album. It takes you on an emotional rollercoaster from start to finish. Quite simply an unmitigated earthquake of a song, it lodges under your skin instanteously and has so much vivid and fascinating subtle detail as both a single track and as a monstrous closing track.
Overall this album is like a timeless book that cannot be put down. To both the old holders of the battleground to the new heads, this album has it all. Anyone with a passing interest in old school grind, hardcore, powerviolence and extreme metal will be taken aback with the supersonic treasures that lie within. Annexation reigns supreme and proves again why Australia is absolute leaders in extreme metal. 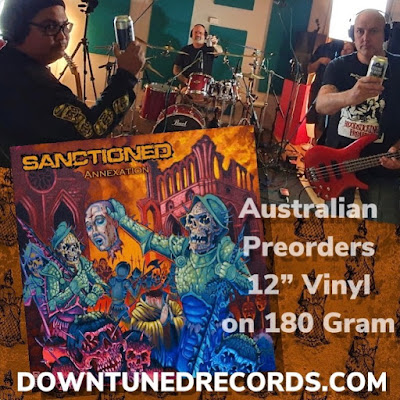 Grab your digital or vinyl copies:
https://downtunedrecords-sanctioned.bandcamp.com/album/annexation
CD copies:
https://www.terriblemutilation.com/shop/
The estimated release date is February 2021(All pre-order sales will be kept updated on the entire progress, including the trips to Zenith Records, test pressing and packaging sessions.)
Watch this amazing video for Toxic:
https://www.youtube.com/watch?v=Tf76OY5N9XY
Support the underground, awesome blokes and brilliant extreme music!!!