Werewolves-What A Time To Be Alive album review. 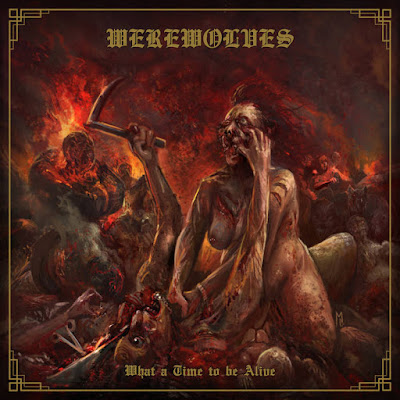 Werewolves-What A Time To Be Alive album review.

FFO: Dirty, unhinged sick as gonorrhoea death metal with enough tech touches to make it modern; yet old school as.
Werewolves are determined and productive units that is for sure. I mean the amazing debut The Dead are Screaming was only released in April last year FFS!!. But these legends have dropped another ripper of an album; that is as staggering and even more brutish than the previous album. But keep it coming you blokes, because no one is stepping up to the plate compared to the merciless masterpieces you are putting out.
The question you may ponder is; is this just more of the same raging shit that blew your eardrums last time?, argh yes but slightly different in that there is more added thrash metal and even black metal touches for extra flavour and bloodthirsty insanity vocally for bitterness. Dave Haley seems intent on playing more intense and even drumming faster than previous bands and there is no fat on this album, just nihilistic death metal that is savage as fuck.
Every track has tons of epic and skin peeling guitarwork and the tempo is simply pedal to the metal.
The nine tracks fly by and have fun picking what tracks are your favourite. But some suggested family-friendly tracks would be the insane opener I Don't Like You which sets the tempo and tone not even remotely with any degree of subtlety. Unfathomably Fucked should get grandpa moshing at the family BBQ with its all-out thrash worship and Antisocial is just a grindy, grubby remorseless track for the ages that is the thuggish boofhead sort of track that is guaranteed to slay the moshpits anywhere.
The most comforting thing about this album is there is no comfort or respite at any stage for this album; it's all thunderous and irate music that exceeds all expectations. No boring shit, just what extreme metal is designed for crazy arse brutality. Kudos guys on yet another ridiculously seething release and stay grumpy, pissed off and cantankerous. It makes for remarkable music that soothes the metalhead's soul.
Watch this:
https://www.youtube.com/watch?v=kOT-hYpIMxk
Grab the album here:
https://werewolvesdeathmetal.bandcamp.com/album/what-a-time-to-be-alive