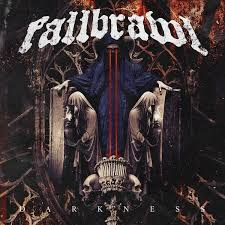 We recently reviewed Fallbrawl's incredible album Darkness and it's a beast you definitely need on rotation. When the chance to interview this amazing band came up, we jumped at the chance.

Fallbrawl is at the cutting edge of their genre and even biting into at other heavy genres. Groundbreakingly heavy and they simply demand your attention.

Stefan (guitar) was great value and passionate as hell. Enjoy this wicked interview.

DH-You have dropped one of the heaviest metallic hardcore/extreme metal releases in 10 years, what is the background to this album, I know the label gave you three years to refine and craft this release, we would love to hear about the inspiration and also the processes behind it.

S-First off; Thank you for your kind words, I really appreciate that. You may have noticed that over the last years and the previous LP’s the metallic influence has grown constantly, leading to our release “Chaos Reigns” in 2016. With “Darkness” we basically have tried to follow this path and push it even further. This time maybe in a more heavy/dark but also melodic direction.

The writing process was kind of similar to the last LP. This means that in most cases I come up with a song concept or even just some riffs, which we then all together arrange to an instrumental. In this process, our drummer Simon, in particular, can lift these concepts to a whole new level with his input. After this AK adds the lyrics to the song. Here, of course, adjustments have to be made to the instrumental in order to make the song coherent. The only difference to the previous writing processes was, that this time we took even more time to refine the songs than ever before. So after this writing process, we had about 15 Songs from which we picked the, in our opinion, 10 best ones and put them onto the record.

DH-Everything is so much more brutal and for a band of your type, that’s hard to imagine, was the move intentional?; because I know as a fan I love the progression every release has brought.

S-Yes, it definitely was intentional. You know we always try to push our music in terms of songwriting but still keep the songs heavy, with the aim not to sound boring or generic. I think with "Darkness" we definitely managed to improve on the previous releases. Which of course doesn't mean that we will leave it at that for the next release. It will be the goal to beat that again.

DH-It's 2019, how do we separate the fakers from the hard grafters like your band, social media seems to suffocate many bands; all fake image this and that, let’s get your perspective?

S-From the distance that social media brings with it, it's always difficult to judge - that's true. So I think the best way is to go to shows and concerts and talk to people to form your own impression of who's "fake" and who's not.

DH-Tell me about the highs and lows of your band, what motivates you and what annoys you?

S-I think the release of "Darkness" and the related release tour definitely falls into the category "high". But of course, there are also times when things don't go so well. For example, after the release of the “Cold World” LP in 2008 it took us a really long time to get back to writing new songs. We got a little stuck and had not that much motivation. Maybe this was probably due to some changes in the lineup at this time. By the way, this is also a thing that I’m not really a fan of - Even if the withdrawal of a band member is going well, which has always been the case with us. However, compensating for the changes that come with it is never easy. Accordingly, I am really glad that we are so firmly established in our current line up. 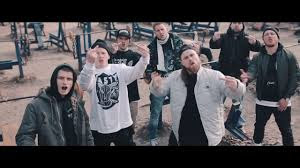 DH-Metal and hardcore is one of the most rewarding and sustaining genres, how did you first get involved, what were some of the most inspiring bands and how has the scene changed over time in your experience?


S-Personally, I've been listening to metal and rock since I can think. Even though in my childhood it was more like well-known bands like Metallica, Motörhead or Bad Religion. I think I’ve been to my first hardcore show around 2003/2004. At that time I got more in touch with heavy and extreme music and had also started to make music together with Paddy (Nasty) and some other guys, which was the basis for the formation of Fallbrawl in 2005. I think my main inspiration at that time was bands like Death, Metallica, At the Gates or Killswitch Engage but of course also more hardcore oriented bands like Born from Pain, Enemy Ground or Zero Mentality.

There has definitely been a change in the scene. Currently, there are a lot of subgenres around hardcore, which have formed over the years and now all have their own bands, fanbase, and shows. Around 2005 all these bands would probably have played on the same show, what today seems barely possible. And of course: The motivation of people to come to shows has decreased due to the availability of music, live videos, and co. on the internet.

DH-what are the plans for the band over the next year or so, and does it possibly involve an Australian tour?

S-I think next year we'll play some shows and festivals to promote "Darkness", and then maybe we'll start writing songs for the next album.

Concerning Australia, we have no plans at the moment even though we would love to play some shows there. So if anyone would be interested to do a Fallbrawl show in Australia: Feel free to contact us or our agency anytime.

DH-What are some of your favorite gigs that stand out?

S-This is hard to answer with almost 15 years of band history... The shows at JUZ in Essen, as well as the Filled with Hate or One Life One Crew Fests, were really cool shows. But also the tours with Lionheart and Nasty were always great. Also, I can highlight the Japan Tour in 2018. That was a crazy experience.

DH-what albums have you got on rotation at the moment?

S-I’m just listening to the “Fallen Angels Dominion” record by Thulcandra. Also “Hisspunn” by Chelsea Wolfe is running again and again lately. A great album. And otherwise, I somehow discovered my love for Alice in Chains. “Facelift” and “Dirt” are both massive records.

DH-what is your favorite track over the new album and why?

S-REALLY difficult question. This depends on my daily mood. But the title "Best Song" would probably go to Pressure, Helldogs, Nebula or My world burns. But I can't commit exactly.

S-As I already mentioned, we had a strong connection to the scene in the Ruhr area at the beginning of Fallbrawl. Also because at the same time as us some other quite young bands like Reduction, Brothers in Crime or In Blood We Trust were very active. We certainly played dozens of shows with them and always had a great time. Furthermore, there were lots of shows with international hardcore bands (Shattered Realm, E-Town Concrete, Wisdom in Chains, etc.) in the Ruhr area due to the very active labels and bookers (e.g. Filled with Hate Records or Rico 17Stitches). All this together had, of course, influenced our sound. Especially the sound of the first demo's and the “Cold World”. At that time we were definitely more a Beatdown / Hardcore Band than we are at the moment.

DH-Like most underground musicians you have day jobs, how’s the balance given the demand for Fallbrawl each year is certainly greater and def will be with the new album?

S-Yes, that's really the case. Especially for AK and me, who have a permanent job, it is not so easy to get free for long tours or the like. Also, the sum of the vacation days is limited here of course. Which doesn't mean that it's easier for the other two guys. Although both are freelancers in the music business, they have to look at how they plan their other dates and tours and assume that there is still enough room for Fallbrawl. So even though it’s hard to manage, but I think even if it is a little difficult to organize, we will always manage to write new material and play shows…Even if it may take a little longer or doesn’t happen too often.

DH- any final words and messages? And please keep producing the high-quality albums that make up your amazing catalogue!!!

S-At first, I want to thank you for this interview request. I had a lot of fun answering these questions. Also many thanks to all those who have contributed in some way to “Darkness”: Toni at BDHW-Records, Lucky Bob Music Agency, David Beule at Shrimp Studio, Manu at Parabol Studio, Moritz Hartmann Photo and Video, Flo of Broken Humanity, Ricky of Lionheart and Dennis of Any Given Day. Make sure you check out all these guys and their projects as wells as our new record “Darkness”. Cheers.

DH-My pleasure, you certainly deserve all the positive feedback for this album and all of your albums tbh!. Cheers for the interview and your time. 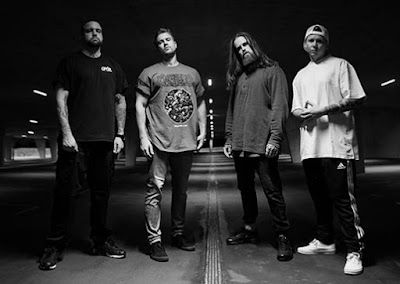 Don't hesitate and grab a copy of Darkness asap:
Darkness