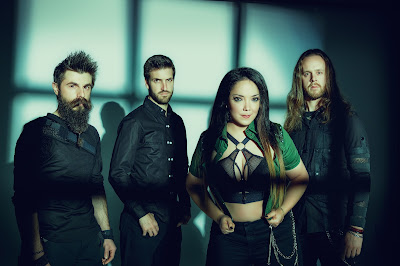 If gripping progressive metal or even power metal with amazing vocals, clever song structures, and breathtaking guitar artistry is an essential part of your playlist; you need to go deep on Divine Ascension. Melbourne consistently produces high-quality metal of all genres and this band illustrates this for this genre very clearly.

So when we had the chance to chat with the guitar wizard that is Karl from the band, we had no hesitation to uncover the details of this band as they embark on their tour of recent crackerjack of an album The Uncovering.

1-You have been kicking since 2007 could give me a brief history of your band, the meaning of the band name and what releases you have?

We have actually been a band a little longer than 2007.  The band formed in the years leading up to 2007 when we recorded and released our first demo.  I was actually the final member to join.  Four years later we released our debut album As The Truth Appears.  We were extremely lucky to sign a deal with Nightmare Records (worldwide) and Hydrant Music (Japan).

Liberator was our sophomore release in 2014 and saw us with a small line-up change and also providing us with both national and international tour opportunities.  2015 was a huge year for us supporting Blind Guardian nationally, doing our own headline tour to promote Liberator and also heading over to Europe to support Stratovarius and Gloryhammer.  In 2018 we released The Uncovering through Vicisolum Productions in Sweden who also released Liberator.  We are following that up with the Uncovering Australia Tour as well as currently beginning to write for our fourth album.

The band name is the result of us trying for a long time to come up with something both unique as well as something we liked.  I remember throwing around the word ‘ascension’ at the time referring to how we would start from the ground and move up.  The word ‘divine’ was used to describe Jen’s voice by someone outside the band and immediately we put them together. 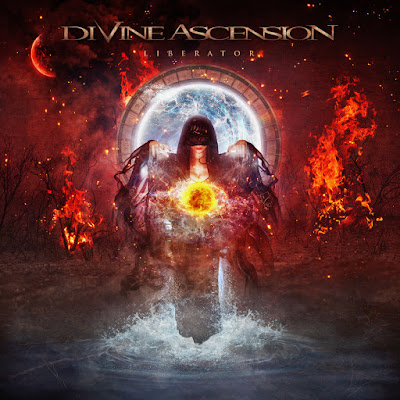 2- What drew you to metal and it’s related genres and why is it such a rewarding and sustaining genre of music to you? The band certainly seems extremely passionate when you are discussing your epic career.

The raw aggression, dynamics and many layers of melody is what drew me into metal.  Like you mentioned, there are so many related genres which means always having new music to sink your teeth into.  I think there is also a genuine passion and love for the music and everything that goes with it in the metal industry from everyone who is part of it.  They all truly believe in what they are doing and that shines through the music they produce.
Another thing is the constant focus on doing better.  We always set goals that are above and beyond what we have previously done and that makes us work harder to achieve them.  That consistent reaching for the next level always provides a hugely satisfying reward when you do achieve it, yet it also gives you motivation and something to look forward to.  That definitely sustains what we do.

3- Devil’s Horns firmly believes that music and art is the best crossover in the universe, how does that work for you as a band? There seems a high level of attention in your artwork and videoclips.

100% agree!  We always discuss what we do as art.  We are not doing it for any other reason except to express how we feel through a form of art.  When we write an album, we always have an abundance of material that is non-musical to support the music we have created.  We want the album to be a complete package.  So the artwork and video clips as well as our stage show must match and enhance the overall experience of the album.  We spend just as much time planning and creating non-musical things as we do creating music.

4- Live how does your music translate? do you have a message or what rewards you? I’d also love for you to discuss why lyrics are so important, you have great lyrics tbh.

It’s quite a different experience live now.  Because we have had line-up changes, we have had to adapt how we perform some of the music live.  This is both challenging for us as well as providing the fans with a different perspective on the songs.

We often get told we always look so happy on stage and that is because we are completely enjoying just playing our music together with people singing along.  I guess that is the reward for us.  Simply that people can enjoy what we do as we enjoy it.

In regards to the lyrics, they are extremely important.  I really like how we have accomplished it in Divine Ascension.  They are written in a way that as a listener, you can develop your own understanding and connection to them.  This is great as each person walks a different path in life, each with different trials and tribulations.  So, to be able to connect them to the same piece of music someone else does, is a really unique thing. 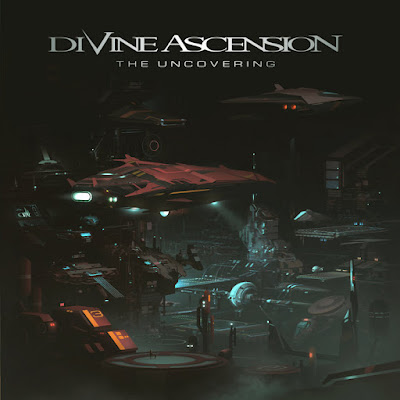 5- The Uncovering is a hell of an album on quite a few levels, the searing production seemed to amplify everything the band has done so far to a huge level, Jen’s vocals seem even more powerful and the guitar work is so savage. You must be proud as punch, it’s quite a progressive metal masterpiece.

Thank you very much!  We are indeed!  Both the vocals as well as the guitars were our focus on this record.  Before beginning work on each album we always have a focus or goal to improve upon from the previous release.  We are super happy to hear that translated with you!

Another thing we did was went all out with the production.  We worked with Jens Bogren at Fascination Street Studios in Sweden.  The first reason was he did such a fantastic job with Liberator and was so easy to work with.  But the second reason is so that people could focus purely on the music we had written and performed.  With top notch quality production, the listeners focus shifts solely to the songs and is not distracted by annoying production flaws.

Releasing our debut album was of course a huge thing for us. Also, our very first live show is one of those things you always remember.  But one of our biggest achievements to date is supporting Stratovarius across Europe in 2015.  That was truly magnificent and an experience that will be hard to top!  So I think that would have to be number one…so far! Haha!

7- On the flipside, some of the struggles and challenges?

There are many! Haha!  Probably the biggest challenge is balancing full-time work for all band members and also consistently being active with the band.  Whether that is writing, recording, rehearsing, touring, filming or just keeping our social media and websites ticking over, it is a huge task and there are only so many hours in the day!  It is the one thing we have and will most likely always struggle with.

There are many!  Haha!  Some of my favourite artists include Freak Kitchen, Soilwork, Symphony X, Seventh Wonder, Dream Theater and the list continues.  But recently I have been spinning the new Sylosis, The Night Flight Orchestra and Halestorm albums.  They are brilliant!  I am also really looking forward to checking out the Allen/Olzon and Testament albums.

9- You started your Uncovering Australian tour recently with a crushing gig in Geelong and April sees it concluding with dates in Melbourne, Canberra and Sydney, as a European tour veteran tell me how it feels to showcase this killer release nationally? And what is next for the band after the tour-recording and future tour wise?

We did indeed!  The Geelong show at The Barwon Club was really fun!  We had great bands, great fans and just a really fun vibe the whole night.  Everyone was just enjoying themselves.

It is always enjoyable to play shows at home in local venues.  I enjoy getting to visit the places and also catch up with some old friends and hopefully make some new ones.  Another thing is that we always get to play with such talented local acts.  It really showcases the amount of quality bands we have here in Australia and how lucky we are to share the stage with some of them.

After this tour we will be getting back into writing for our next album.  We already have a number of ideas floating around and are all keen to get cracking on it.  But I think we will also keep an eye out for any international acts heading to Australia who may need a support!  Haha!

Just a huge thank you to each and every one of you who have supported us in any way, shape or form!  As I previously said, it is a big challenge balancing what we do with full-time work, but seeing the support from people everywhere is really uplifting and extremely humbling.  Thank you!

Thanks for your time!!! And have a great tour!!

Thank you for giving me the opportunity to chat with you about my experiences and Divine Ascension Mark.  We all sincerely appreciate it.

Here are the upcoming tour details: