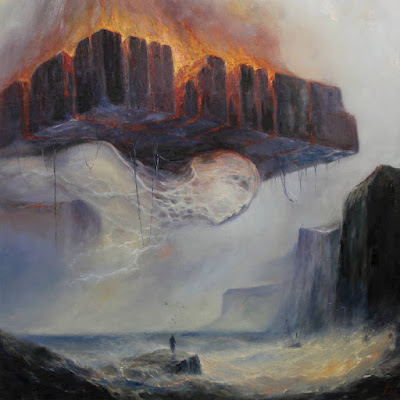 This is one of the many releases we are playing catchup on as Sept-Nov has been hectic and so many releases have dropped. But I wasn't letting this one go astray, as this is a deep and mindblowing release.
Australia has consistently produced brilliant extreme metal and this band needs all your attention. Shit like modern Behemoth gets all the press for frankly creating absolutely dull releases that are boring as hell. This is the real deal.
Bio:
Born from pandemic isolation in 2021, Vikvanir is the black metal project of Zachary Carlsson, an Australian musician, vocalist and composer. First conceptualised in 2018, the last few years brought with them, amongst many other things, the free time to bring this project into existence.

Within the realm of black metal, Vikvanir draws thematically from the aesthetics of epic fantasy and Norse mythology (yet never referencing the latter directly), with the music crafted to serve as the vessel for these ideas to be borne upon. Other musical influences also seep through the composition, with nods to doom, death, progressive and Viking metal all taking part in creating a diverse soundscape of metal.

So literally a fantastic musical feast awaits given that description.

Seaborne Monstrosity is the opener and a fantastic start, a very subtle and quiet buildup and you ponder if this is an acoustic album, but grim samples lead into moody brilliance. Discordant, yet melodic guitar play combined with wonderful synth work build a place that is fractured by magnificent vocals that are doomy and haunting.
Corpse-Strewn Path to the Citadel has a minimal lead-in to the excitement that starts immediately, and this is a track that grabs you by the throat given a brisk tempo, plus a cool mix of Death 'n' Roll meets old school black metal. This intersection of Mayhem meets Entombed is entrancing, solid and weighty. This was a dynamic beast of a track and the underpinning groove was wild. The guitars also had some wicked eclectic prog touches that added to the colour of it all. The album is very much intelligent black metal and one that is structured so smartly.
What Hell do I Reside plods simply with immense blackened riffs that were in superb sync with a slower tempo in the vein of Venom or Bathory and that is an impressive task in itself. The whole movement and atmosphere of this song were very sublime. The last 2 tracks were massive highlights of this release, but then the last two tracks pretty much knock you out with a kick to the face. Navigating the Transept is the first part of this brutality. The wild synths added so much and this atmospheric havoc took my breath away as well as it is equally unsettling and the tremolo is acidic, but the overall punch is so powerful. I find this an absolute rarity with most black metal. But the drumming is as monstrous as the riffs and the crushing effect of the vocals is perversely evil. Plus the ending of this track was outrageously spacious and hazy in a phenomenal horror movie way. The Purging Fires ends this release and you can see the craft and guile of the track placement because everything else has led up to this triumphant track. The beginning is crispy and reminds me of Dark Throne's greatest works and the instruments are ingeniously tiered to create a song that is equally classic and breathtaking. The tone is thick and drips with bleak splendour.
You need this EP, it's only a digital release, but easily the best Black metal release of the year and this is a band worth keeping an eye on, fuck the mainstream this is gloriously evil perfection.
Out now:
https://vikvanir.bandcamp.com/album/on-the-shoulders-of-gods
Antisocial:
Not much of a presence but has a FB:
https://www.facebook.com/zachary.j.carlsson
and is in the glorious:
BlackTrilliumBand