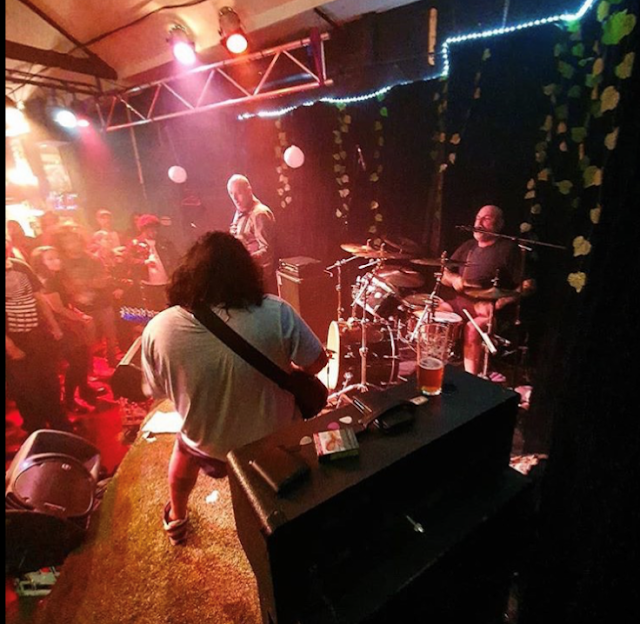 Sanctioned has achieved cult-like status for a band that has only played about ten shows. But their aggressive intent is so damn clear, this is a band who grabs you around the throat and demands your attention with their hectic grind/crust roundhouse kick to the face. The artisan like skillsets of each member is very apparent from being in so many seminal bands and this shows it's brilliance in both solid songwriting ability and being killer live performers. The band has recorded their debut album Annexation which should drop in November. And you know already, it will be a certified classic. Ladies and Gentlemen, I present to you the harsh, erosive and momentous metal force that is Sanctioned.

Sanctioned comes with some heavyweight Melbourne extreme music legends in its foundations; give us the history of this epic old school grindcore battalion, keen to hear how the band come about and also for those sleeping under a rock, your member's sensational band credentials?

Jay: Yes we have all been in many bands such as MYC, Heads Kicked Off, Stamanech 6.40, Undinism, Open Wound, Fuck I’m Dead, The Kill, Kutabare, Christcrusher and Remains. The band came about from the ashes of Christcrusher when Pauly was keen to keep grinding and got myself and Steve in on some riffage grinding action.

Pauly: I took a break after I killed Christcrusher. We played a lot of shows and I needed to chill for a minute. I knew I’d get back into it and I wanted it to be with people I know, like and respect. Jay and I had done bands together previously but another close friend suggested I ask Steve to play bass. Best idea ever. 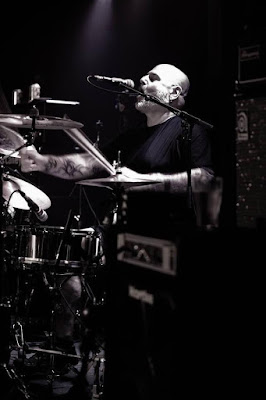 Why is old school better than so much new music, I mean Sanctioned has a definitive 90’s grindcore base with some strong hardcore stylings; the throwbacks to classic bands and that abrasive tone is missing in so many modern bands? Thoughts? Also, why are blastbeats so necessary?

Jay:  I don’t know if it’s better I just think it depends on how old you are. Grumpy old bastards seem to always like the old school better because that was the music you grew up with and shaped your musical journey. We’re definitely influenced by loads of 90’s grindcore and hardcore too. I must admit I don’t listen to many modern bands I probably should try and check out more as I might be pleasantly surprised. I think some of the abrasive-ness is missing now because of the way we record now all digital. We used to record straight to tape and with no computer to touch things up. Blast beats are always necessary there’s nothing like a good tight blast section in a song to hook into. If played well it’s so brutal.

Pauly: I think we were somewhat conscious of not wanting to sound like any current bands. Make of that what you will...I happen to like 90’s grind and hardcore. It stands to reason that Sanctioned would sound like that.

You have in a relatively short time played some killer shows/lineups including the Summer Speedfest, Integrity and Sulphuric Cautery/Girth (USA) support shows, no pressure hey?. 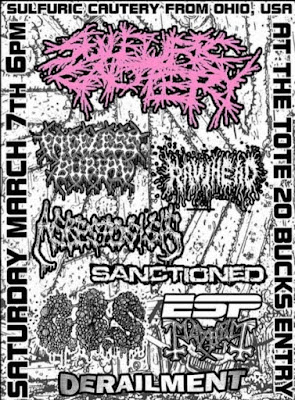 Jay: Yeah man we’ve been super lucky with the shows we’ve played so far we can’t bloody wait to play again though…

Pauly: Those three shows were special for different reasons. They were the first with this revised lineup (with Jay on drums and lead vocals) so to be able to pull that off proficiently, tightly and ferociously for such good shows was sick. That Mindsnare and Integrity show was bananas but it also consolidated the idea in our heads that we can get down with hardcore audiences as well as we do with grind audiences. I feel that it’s important, to an extent, to be able to transcend some of those barriers in heavy music...within logical reasoning of course... 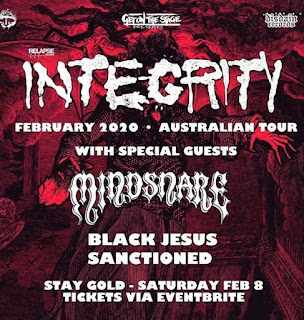 What makes Melbourne such a fantastically skilled ground for metal, punk and underground music? What bands jump out at you currently and also rewind the tape to some of the best shows you have seen and/or played at? I realise the options are pretty broad and killer.

Jay:  I don’t really know why maybe because we are spoiled for venue choices and Melbournians just have the skills ha ha. The bands that jump out for me at the moment are Faceless Burial and Internal Rot.

Pauly: Quite simply, I reckon it’s the people who live here, the long term Melburnians, that make it what it is. We’re pretty laid back but at the same time, can put our heads down when we need to get shit done. Current bands I like are Internal Rot, Contaminated, Rawhead, Headless Death, Mindsnare, Deliquesce, and Excarnate. Interstate, I like Dog, John Howard and Obat Batuk.

Pauly, you have played the drums in bands as well as bass (like your multi talented singer/drummer Jay), but your favourite weapon seems to be the guitar, why after so many years does it still hold its appeal and what guitarists have influenced your playing style?

Pauly: I love the guitar tone on Speak English or Die. I’d hate for some arsehole to remaster it. It’s perfect. Also, the A-Side of Dayglo Abortions, ‘Feed Us A Fetus’ guitar tone is madness. 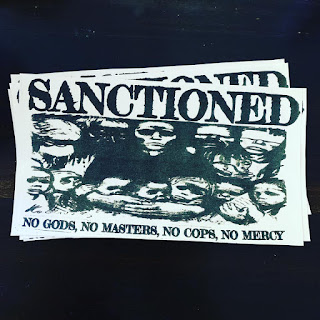 The album, Annexation drops towards the end of the year, give us all the sordid details? And it’s being released on Terrible Mutilation Records, congrats on that, they always drop the most hectic releases, consistently-great match!. How did the recording go and have the tracks on this been firm live faves already? And can you confirm or deny that this ripsnorter contains a Husker-Du cover? Also, give us any clues regarding the album art? The nasty 3 tracks up on Bandcamp make the mouth water as well as perforating my ears, are they fairly indicative of the whole release?

Pauly: Lachie at Terrible Mutilation carries on the fine tradition of killer, Melbourne labels such as Blastasfuk and No Escape, putting out top-notch releases so we’re super psyched to have him release our album. The good folk over at Downtuned are a relatively new Australian venture that will be doing the vinyl release of Annexation, and is dedicated to the releasing of quality bands also, so I love that we can be associated with local labels. Luke over at Danger Tone looked after the recording side of things and did a stellar job. Yes, there is a Husker Du cover on the album too. Check our Bandcamp for demo versions of 3 songs from Annexation that were recorded live to track.

Given we are still firmly in this COVID-19 bunker, what are the plans going forward for Sanctioned, pay per view rehearsal gigs, gigs at local skate parks or what else?

Jay: We were thinking of maybe doing some live rehearsal shows or the like definitely hanging to play again.

Pauly: We had a big show booked with Contaminated and Fornicatador that obviously got shut down due to COVID. Beyond that, we’re just waiting for restrictions to lift so that we can play out again and drink in bars like normal people do. We’ll maybe do an Instagram live thing...its a bit cliche though isn't it? It might be impromptu so if you don’t follow us already… sanctionedxblast_ 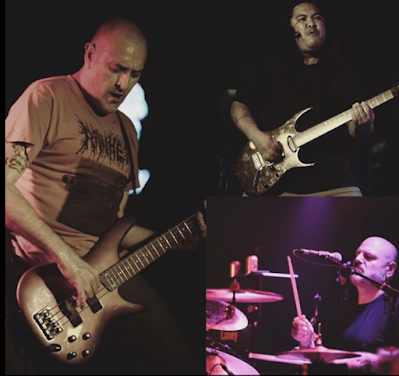 Lyrically what does Sanctioned have to say? Do you have a message, social commentary or more like Rupture style vibes?

Jay: The lyrics all come from my head. Mainly things that piss me off, pretty left-wing politically also a good fictional story and mental health issues which there is a lot of this happening to many people at the moment.

Is music getting better or worse? Even in the grind scene(same as the crust scene) we have so many copycat bands it’s pretty absurd, do we need to bomb the whole lot and start again, what’s the answer?

Jay: I don’t think music is getting worse. I think the reason there’s a lot of copycat bands is because it’s much harder to be original nowadays. I don’t mind bands sounding like other bands as long as they do it well or even put a bit of their own spin on it.

Pauly: ...probably asking the wrong person. The last current music I listened to was the Internal Rot record and the Caustic Wound album. Based on those two examples, I would say that music is not getting worse however, I get the feeling that those two bands are an exception rather than the norm...Beyond that, I only listen to straight edge hardcore, rap and 90’s grind.

What are some of the highlights of this band so far?

Jay: All the shows you mentioned in question 3, but would like to add playing with Mindsnare; good friends and a great fucking band. Also recording Annexation good times.

Pauly: Ditto regarding Mindsnare. Writing a whole album has been great. I’ve never actually done that before.

You and Jay have been in a million decent bands, are you guys ever going to retire or can we expect an Aged care double album in 2034?

Jay:  Ha ha ha yeah we will do our grindfathers band playing old school grind and hardcore covers live from our nursing home.

Pauly: I don’t look my age so I’ll probably be doing this for at least another decade...Haven’t done a noisy, Discharge style band yet...look out! 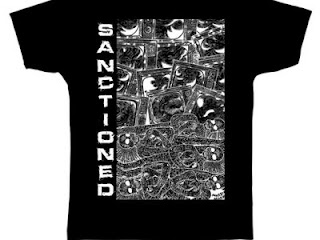 Any final message to the deadbeat grindcore heads that are eagerly waiting for your live return and the nuclear-powered album that is due in November?

Jay: Just to be patient because our debut albums gonna be killer.

Pauly: Support DIY endeavours whether they be art, bars, musicians or whatever. COVID has really emphasised how integral these things are to our happiness so as soon as restrictions are lifted, go to a show, but lots of drinks for your crew, buy merch and tip the bar person.

Cheers boys and keep your eyes locked to their social media and look out for both the album dropping later this year and equally important the live return of this brutal band!!!.
Photo credits: Dave Chambers.