The Transience Of Flesh - Descend to Acheron EP review and interview. 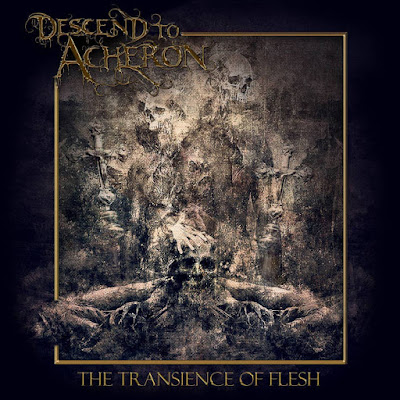 The Transience Of Flesh by Descend to Acheron EP review.

Often this writer crosses his fingers and hopes that the music matches the brutal cover artwork. 100% it does in this case. Descend to Acheron is a brutal OSDM band from Adelaide who has dropped a skull shattering gem in the form of this 6 track masterpiece.

FFO: Nasty, brutal, and dynamic Death metal that takes no prisoners.
Riffs are in an absolute amphetamine race with the drums and pure gory and caustic driven vocals of the highest order. This EP simply does not fuck about, whether it's the guitars, the rhythm section, or vocals; they all seem to entice you into what's coming up next. And the length of the EP is super appealing because each track is short and sweet like a hammer to your face. The bloodied frenzy of these EP doesn't let up and each track attempts to outdo the crazy tones of the previous. It definitely is very OSDM influenced, there is some strong technical prowess but the key here is overwhelming brutality.
Fave tracks: Your Suffering is a Gift and The Godless Pt 1 and 2. This release again reiterates the magnificent power and sheer quality of Australian extreme music released in 2020. A flawless debut that you will return to again and again. Without any doubt, this is throat-ripping metal perfection from Adelaide!!!.

Grab a listen and a copy of it here:
https://descendtoacheron.bandcamp.com/releases

Watch this mad clip, my highlight of the EP:
https://www.youtube.com/watch?v=vQB5BTFQA4Q&feature=youtu.be

Now here's our chat with this awesome band:

Give me the background of this skull-crushing band, you are getting a shit-ton of attention for band that hasn’t been around that long?

Cheers, we're getting great feedback on the EP from everyone so far. The band has actually been around since 2014. Pete and I started writing new tunes when we left our old band.
We recorded the bulk of the EP back then an we've only held off releasing the EP because we didn't have a full line up for playing live. We really wanted to make sure we had the right people for the job, both playing and personality-wise before we shared it with the world.

You dropped recently the brutal gem that is your debut, The Transience of Flesh.
Quite a few things strike me about this recently, once I picked myself off the floor from the initial earthquake-like impact of it; the production is intense and aggressive and the contents of the release are full to the brim of insane riffs, brutal drum warfare, and evil vocals…like it’s hectic impressive release. I’d love to know how you got the sound that is both unique and sheer psychopathic excess. Was it a difficult EP to record?

Haha, thanks. That's definitely the vibe we were going for. To be honest, all death metal is a pain in the arse to record, esp when you're down-tuned as far as we are. It's basically what I do for a living and it's always a challenge to make it big and clear but not too polished and sterile.
We drew a lot of inspiration from the classic death metal bands, but also the dynamics and intensity of the modern bands. Even after the EP had been recorded, we weren't afraid to chop things or change them if the song didn't feel right. I think that constant reviewing and tweaking is something more bands could maybe afford to be open to.

COVID has really slowed down the live front, how were your live shows prior to this pandemic? I can imagine gigs would be one sick affair, given the tone of this EP-nasty but very dynamic. Guess you will be hanging to tour this ep nationwide in the future?

Yeah, COVID really fucked our live schedule. We had to cancel all of our shows including our launch and Blacken Open Air which is always an amazing show.
We haven't had a chance to play much yet, but we are extremely keen to get out there as much as possible.

It’s a generic question, but when the name is quality I have to ask, how did you come up with the name?

Band names are THE most difficult part about starting a new band. Even worse than having to find a drummer in Adelaide! Pete and I were kicking around names for ages and Descend To Acheron was the only one we could both agree on.
In ancient Greek mythology Acheron is a river of Hades, so Descend To Acheron is the descent to Hell. For me, the name is kind of symbolic of the alarming current trend in society to turn our backs on all the science and understanding that helped drag the human race out of the dark ages in favor of unsubstantiated nonsense spouted by unqualified people social forums. At times it feels as though we're going backwards as a species. 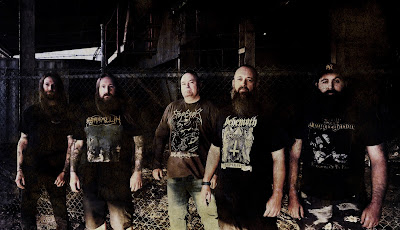 What are your fave songs off this EP and why? For me, it’s Your Suffering is a Gift because it is unrelenting from start to finish and the riffs/vocals are staggeringly brilliant.

Cheers, I think that is the band favorite too. Interestingly, that song was written at the last minute when Dave Haley (Psycroptic) was recording the drums for us. We were originally going to do a cover and Dave encouraged us to write a new original track instead.
Pete went straight home and knocked it out in one afternoon and sent it down for us to record drums to the next day.
Vocally for me it's very different too, I don't usually write vocals that follow the riff in that way, but it just felt right. The addition of Lia's vocals took it to the next level too.

The band definitely sits in between a few genres, but there is definitely a huge Death Metal foundation to the sound, what bands influenced you the most?

Yeah, there's no mistaking that we love death metal, but we didn't want to be limited to one style. We just wrote what we wanted to hear. At the time we were digging Suffocation, Behemoth, The Amenta and Hour Of Penance pretty hard. So there's a real blend of different extreme styles.

How did you get into heavy music and I realize the members probably have both shared and individual pathways to being metal wizards?

I got into metal the way a lot of people do I suppose. I heard it from some of the older kids at school and was terrified, but very intrigued! I'm sure we all have similar stories. I got into Pantera and Sepultura for a bit and then discovered Deicide's first album and have been obsessed with death metal ever since.

Why metal such a rewarding and sustaining community? Why are Aussie bands o original to their overseas counterparts? What Aussie bands blow your mind atm?

I think metal has such a sustained community because it isn't as trend orientated as a lot of other styles of music. We all love a lot of the same music we got into when we were teenagers. Tastes evolve obviously, but those first influences will always be treasured.
I think our geographical isolation probably had a lot to do with Australia's unique take on metal in the earlier days just to do with the sheer separation. These days we are much more connected with the world. But I think for an Australian band to be recognized overseas we have to work a hell of a lot harder to even be noticed. I think that has really helped the talent pool here.

What has been some of the highlights and struggles for this band so far?

Our biggest struggle was the same as everyone from Adelaide.... finding a drummer! Haha. We're all pretty chilled people and get along well, so it's been pretty smooth sailing internally.  On the plus side, they're all great musicians and it's a joy to be in a band with them.
Working with Dave Haley on the recording was a bucket list item for me too. I've been a big fan of his for ages so it was great to record him.
COVID really messed up our plans, but it's given us time to think about getting a follow-up release happening ASAP.

What the plans for this amazing band in the future?

Definitely keen to get cracking on an album and try to get the music out there as far as we can.
We should hopefully have physical copies of the EP out sometime soon and our first merch design is on preorder too.

Any messages for the fans out there?

Just a big thank you to everyone that has supported us so far, we definitely appreciate it! Look out for new tunes coming soon!