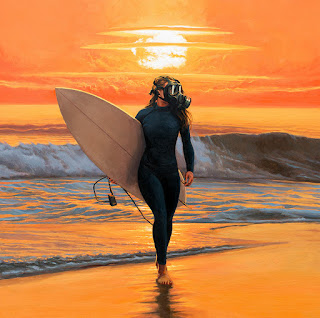 Birdcage-Wave Machine album review.
What would you do after being in some of the country's most heavy and brutal bands? it's so damn obvious you start a quality instrumental surf band. No, not that shitty and trendy Beach Boys bullshit, we are talking the real deal reverb deep addictive guitar-focused frenzy à la Dick Dale, The Ventures and Los Straightjackets. Damn, I just can't believe I hadn't heard these cats before. By all accounts, they kill it live as well. And you would seriously need ten truckloads of hot skill to deliver this type of album live. Proficient and dextrous would be the minimum to even entertain joining this outfit. Wave Machine is an accomplished hotbed of outstandingly catchy tracks that are fiercely energetic and spellbinding. This can be a soundtrack to anything from deep-focus background work music, walks in a forest to absolute boozy party time. The twangy pace certainly varies over the album, even though most songs work towards a frenzied war of pitch and intense mood. As with most quality surf music, the mesmerizing driving drumbeats guide the tone of each well-structured track; but as they say in reality tv, the real hero is the guitar finesse. I listened to this on huge speakers, headphones, and in the car, and regardless of the output device, this album showcases a magical use of the guitar. Every riff was enthralling and enchanting. Now that may sound to you like some rank lost walk in a field on too many magic mushrooms, but once you play this album from start to end, you will be absorbed by it and play it again...and again...and again. Even without any vocal stylings, it has so much mood and emotive tone in most tracks; but brilliantly highlighted in No Lone Zone, Antler and Beach Ballin'. Balance that out with some tracks like Sea Daddy, Aluminum Death Tube and Totem that just flat out rock your socks off. This writer most definitely appreciated how the overall sound has so many varied influences could be delivered in one very solid album. You have the definite surf rock foundation, but it also has that 60's/70's Aussie garage rock groove interwoven with the addictive tone of Mexican surf punk. That's a whole heap of excellent skill and entertainment in one album.
No, it ain't a trendy or mainstream album, it's an extremely executed release that you will still play in 15 years' time. Now let's talk briefly about the killer album art, did you have memories or flashbacks to several metal classic album covers, because I certainly did. What a ripper of a cover and it was handpainted by the guitarist Xavier, again these fuckers have way too much talent. And look forward to the album closer, it's chilling and dark as hell. Go forth and listen to this ripper of an album even if you ain't no dreadlocked bong-smoking surfie stereotype.