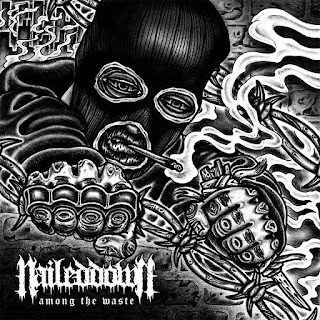 Nailed Down are as hard as their name suggest. Nailed Down is a 5 piece beatdown band reigning from the gritty Central Valley of California. Formed in mid 2017, Nailed Down has already started to stamp a name for themselves in the California hardcore scene and abroad. With influences ranging from bands like No Zodiac and Lifeless to classics such as Slayer and Bulldoze, Nailed Down has brought a familiar heavy beatdown sound while mixing up what is traditional to California's heavy music scene.Brutal and nasty as hell.

Devil's Horns caught up with Nick, their singer.

1.) Could give me a brief history of your band, it’s name and what releases you have?

Nailed Down was formed in 2017. The majority of us played in a local band together a few years prior and then a couple of those members formed another band with our guitarist Gio when our old band broke up. We had a few talks about starting another project, had a few jam sessions and then it kind of just went from there. Our band name is actually a reference to Jesus being nailed to the cross. A lot of our material is based around the idea of being decent people in a fucked up world, that’s where the name of our EP “Among The Waste” came from. So the reference to an execution of a good person in a shit world made perfect sense to us. As far as releases, we put out a demo not to long after we became a band and then just recently dropped our debut EP in March via Upstate Records which has surprisingly done fairly well.

2.) What drew you to hardcore/punk/metal (etc) and what is it such a rewarding and sustaining genre of music to you?

For me personally, I was lost in a whirlwind of drug addiction in my early adult years. It was a slippery slope that I thought I would never overcome. Music was always something I loved and wanted to pursue, but I was too fucked up to make that actually happen. Ironically, I ended up getting my hands on a bass guitar toward the end of my addiction and when I got clean I wrapped my head completely around music. Through that I started attending local shows and somehow just emerged myself into the local scene. Once I found hardcore there was no turning back…something about it just felt right and made perfect sense to me. It was where I was meant to be. Best decision I ever made. The amount of friends, memories and amazing times I have made through hardcore are priceless.

3.) Devil’s Horns firmly believes that music and art is the best crossover in the universe, how does that work for you as a band?
It’s probably very cliché, but our music is our art. With this band, I wrote a lot of lyrics that reflected a lot of dark times in my life…addiction, losing my parents, battling with depression and PTSD, etc. I just wanted to get it out and write music that was genuine. To have people relate to that and appreciate that was amazing. It was very therapeutic for me and also great to have my “art” connect me with other people. Not only did it make me feel like I wasn’t alone, but I hope it can have that same effect on someone else.

4.) Live how does your music translate?, do you have a message or what rewards you?
In the past we were very focused on writing “mosh music”, with this band we just wanted to make music we enjoyed and use it to vent. In doing that, people seem to enjoy it more and let it out more when we play live. Seeing people knowing the lyrics to things I wrote and moshing because they genuinely feel what the song is about is the most rewarding part for me personally. Sharing stages with bands we look up to and having them tell us they enjoy us, people in other countries telling us we’re their favorite band…stuff like that makes it all worth it. We appreciate every single moment of it and we don’t take it for granted at all.

5.) Any upcoming releases you would like to tell us about?

We are actually in the process of working on a self-titled full length that will be released in March 2019 via Upstate Records. We don’t want to sit idle and ride off of whatever we have already put out, we want to keep the ball rolling and keep making music for the people who listen to us. The response from our EP was so far beyond our expectations that we just want to use that as the drive for this new album. We’re just trying to keep evolving and keep pushing ourselves to make better music with every release.

6.) What are the highlights for you as a band so far?

Signing with Upstate Records was a huge highlight for us, Mario and Kim over at the label have been so good to us and we have the upmost love and respect for them. They believed in us when we didn’t even have that confidence in ourselves yet and helped make Nailed Down what it is today. Being able to play our first show with No Zodiac was a highlight for us too, that’s a band we look up to greatly, so sharing the stage with them was a good moment for us for sure. At this point, everything we do is a highlight. We don’t want to take anything for granted and we know this band could no longer be a band at any point, we’re just enjoying it and having fun with it while we can.

7.) On the flipside, the struggles and challenges?
I can honestly say we don’t have many struggles. We have a great group a guys who all get along with each other, a great group of people at our label and at the labels who distribute our music (FWH Records, Retribution Records, 1054 Records), great local bookers / promoters and great people who support our music. Our biggest struggle at this point is normal band stuff. Maybe replacing some gear when needed.

8.) Any favorite current artists or particular albums you have on rotation?
No Zodiac is an obvious one for us. No Altars, Third Rail, World of Pain, Line of Scrimmage, Easy Money, 38 Snub, Dysentery, Before I Had Wings, Safety Switch, Xibalba, Mutilate…there is a lot of stuff we all listen to on a usual basis. These Streets are our friends locally, listen to them for sure.

9.) What are the future plans for you?
Just to keep doing what we’re doing. Play more shows, drop this full length, possible music video and whatever else we can get into. Going to be doing some smaller runs this year, so hopefully we can tour more in 2019 as well.

10.) Any final words or messages?
To everyone who listens to our music, be yourselves. Don’t conform to the bullshit society feeds you or makes you believe you have to be. Listen to what you like, dress how you want, support those who support you and never lose sense of who you are. I feel like hardcore can make people feel like they need to be a certain person, look a certain way, act like a hard ass all the time, etc….but do you. Just because we play heavy music doesn’t make us assholes, it’s cool to respect people. You don’t need to crowdkill the entire show for cool points, maybe make some friends instead of punching them in the face. Community is something we’re losing in hardcore and I think people need to be real again. Let it out and have a good time, by all means, but remember we’re all here for the same reasons. Embrace each other, bring new kids up into the scenes, show em the ropes and pass the torch. Hardcore for hardcore. 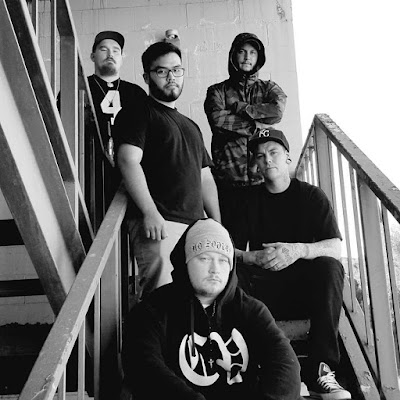 Nailed Down is a completely hard arse beatdown band from California. This isn’t sunny beaches, rollerblades and glamour folks, this is brutal, pummelling music that is skull crushing. Think No Zodiac, Lifeless and No Altars and turn it up to ten. New EP Among the Waste is epically equal parts gloomy and power violence like in their sheer aggressive directive.
Eight tracks that are heavy on bass tone and riffage but vocals that stem from the vocalist’s personal experience with depression and PTSD.
Them’s some nasty tracks indeed. I totally loved tracks like Empty, Damaged and Depart but the whole EP is a total nuclear weapon and this is their debut on the brilliant Upstate Records which you should check out as well. The front cover reveals this bands intention straight-up. As a genre, Beatdown doesn’t greatly vary across a release and this follows that path as well. But that’s what I dig; I am not coming for sing-alongs and melodic wisdom, this is to shatter our eardrums and crush our souls at the same time. Top class release. 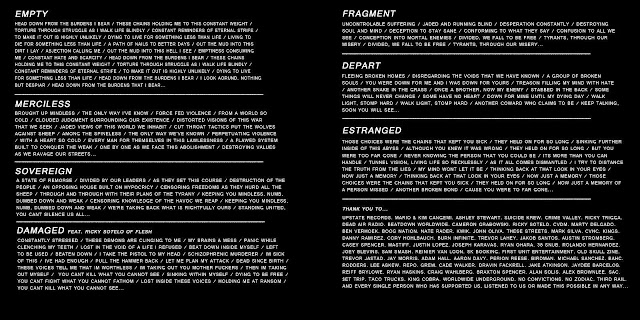