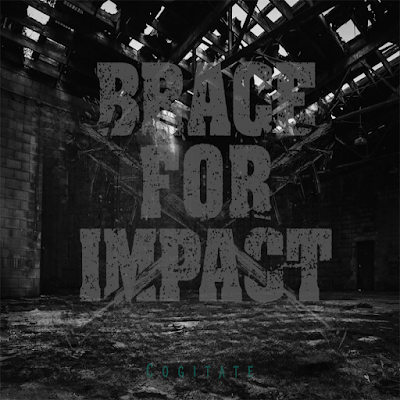 Brace for Impact-Cogitate album. FFO: Killer Aggressive Hardcore with some ripping metallic tone/beatdown vibes. 1054 records continue their solid form with another solid release. This album is a straightforward and hard-edged hardcore ripper.

Brace For Impact was formed in February 2021. They started up just jamming & hanging out then started writing songs and got the itch again. None of the guys had been together since 2006-2007 but they all had been friends and in bands together going back to 2000.

All bands have been fairly successful in their own right having toured with & played with bands such as Hatebreed, E-Town Concrete, Sworn Enemy, Die-Cast, One King Down, Skinless, Chimera, Hoods, Bleeding Through, Bury Your Dead and many others. 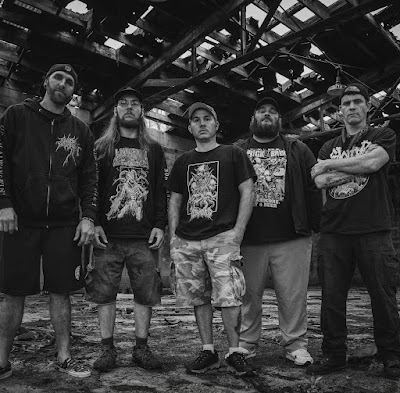 So this is a band that has a great foundation from having experienced players and this debut for 1054 is excellent. This echoes so many solid bands and yet has its own unique sound. No song is too long and the tempo is unrelenting. The opener Scavenger's Daughter starts the album so well with a sick arse sample that launches into a huge riff and is one of the best I've heard in ages. Plus the whole Death before Dishonor meets Hatebreed vibe is instantly a huge win. That epic opener is followed up by some straight-up massive floor stompers. And World Of Deceit, Dead Weight and Breaking Point like the first track have the same coercive objective; smother you with thick riffs, sick breakdowns and super original vocals that drift from straight hardcore to death metal gutturals. The slight beatdown influence is not too dominating and they really retain their own original style. Also, I dig how in some tracks the almost spoken word vocals really build up the tension. Better Off Dead is one of my faves with its commitment to aggression and the vocals really make this so gritty. I love how the vocals are as strong as the dual guitars, and while most hardcore bands don't need more than one guitar; with this band, the persuasive guitarwork adds almost an Obituary edge to most tracks tone-wise. The drums are also at times borderline death metal and a cool point of difference. Clearfield Fkn Hardcore is totally metal as hell and showcases that these guys have so much depth. Puppeteer is probably the weakest track on this album, but that's like a 7/10 rating instead of a 9/10 that the others get-the vocals shred but it wasn't as memorable as the other tracks. But I gotta pick some weakness on any release and that's a lightweight point at that. Control however closes the album out in an extremely strong way with blazing riffs, smart song structure that is catchy as hell and also has a cool Body Count vibe to it musically(I am talking the last few incredible, more metal albums they dropped) and vocally also recalls some of Death Threat's classic hardcore albums. I really also loved the lyrics on this as well. All in all, a cracking and confident release from these beastly blokes. Definitely keen to see what they do on the next album.
Grab this from 1st August:
https://1054.bigcartel.com/product/brace-for-impact-cogitate
Watch this:
https://www.youtube.com/watch?v=kQYFbrpcpKg
Get Antisocial:
https://www.facebook.com/braceforimpact814