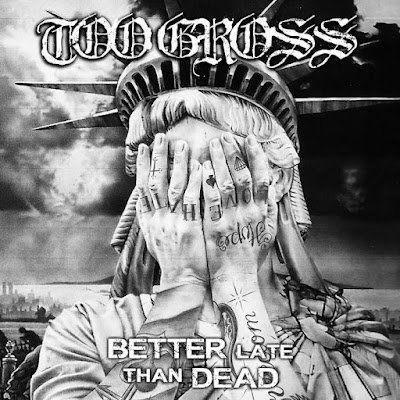 Too Gross-Better Late Than Dead album. FFO: Tough as Nails Old School Hardcore. This is one of my fave genres, Old School Hardcore that is angry, caveman-like, and no mess no fuss. There is nothing fancy here, just big hardcore chunky riffs and attitude. Like I stated this is basic hardcore with a real beatdown style but it is done really well.

Here's ya history lesson:
TOO GROSS was founded in October 2011 as a side project from various European Hardcore bands & released their debut EP via Good Life Recordings in 2012. They then recorded this full-length originally set to be titled “The Last Great Disgrace” ….. Unfortunately, the computer was destroyed at that time and all recording tracks were gone so with only the raw mix left the album never saw the light of day ….. until now !!!!

Aptly renamed "Better Late Than Dead" here is this classic hardcore album that was thought to be lost. 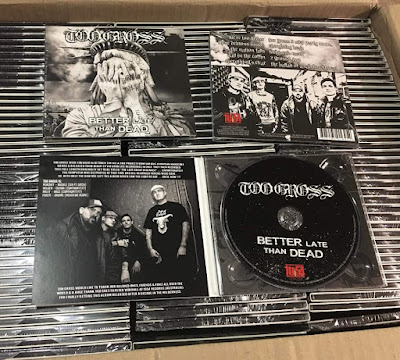 You can tell this band is made up of veterans of the scene as the guitar work is substantial, and the songs are written to maximum impact. The vocals are as neanderthal as expected, thank fuck. The first four tracks rip by in no time and are chock full of decent aggression and the opener We're Too Gross would be a massive call to open up the pit to absolute warfare. I love how it's as euro as hell almost in a nutso Belgian hardcore way but mixed with S.O.D/M.O.D style. Again not much variety on those four tracks, but I wasn't hoping for that. Everything's Clear improves on their solid formula and almost goes Biohazard for a bit mixed with Bulldoze or similar bands. Yes, I am digging the tone and style, confidently apeshit. Everybody Dead is a ripper too with some wild acidic riffs and cool tempo changes. And a classic breakdown in the middle, HELL'S Yeah!. Sick as so far!. Lockwood Razor beats that standard beatdown fare by having that classic refreshing metallic hardcore guitar work that just slaughters you. 2 Gross 1 Cup does a similar thing by slowing shit down and going psychotic at the end. The Ballad of a Sad Lonely Man certainly isn't an acoustic sellout, but rather my fave track with its clever intro that leads into some totally antagonistic greatness. And it has that mountainous riff that reminds me of all the old-school metallic hardcore style that just batters you with the violent riffs and you randomly feel like punching walls or people etc. This is their longest track and it's so killer. This is a cracking release, even though it's technically an old album finally seeing the light. But if you are an old hardcore head who loves crunchy and chunky hardcore-you'll lose your mind over this release. Let's hope this inspires them to write some new material as well, total legends!!!
Out now:
Limited Edition CD Digipacks :
https://1054.bigcartel.com/.../too-gross-better-late-than...