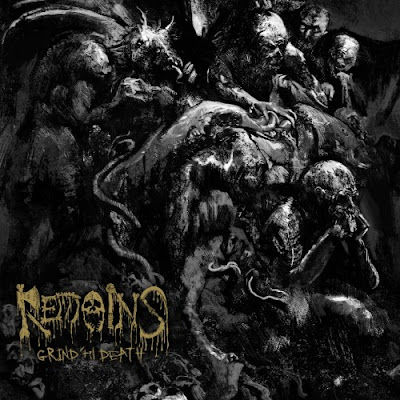 Remains is a supergroup of sorts if you want to categorise and build the hype in a hipster style.
But to the old heads and dedicated fans of extreme metal, we see this as a sick arse group of blokes we know from back in the day, who are absolutely killing it. The foundation of this band is definitely skilled heads who know what the fuck they are doing. And it effectively takes all of their vast skills and produces the album you have always wanted to hear, plus non-shoddy recording skills that just amp the hell out of all instruments and vocals. So it is a well-written album that sounds like the savage beast it should be. We are talking about an Australian instant Grind classic. Very broadly (and for more info, just don't be a dickhead and simply listen to the interview below from the vocal king himself, Sir Tony) this is an album of fast and crushing tracks that are all under 2 and a half minutes with most around the 1:40 min mark. They are all huge crowd pleasers and obviously designed to play live. Totally all about your face getting smashed with a sledgehammer, then running over your body with a steamroller. The pedigree is so strong in this band, they aim to murder you before they cause havoc in their future nursing home (the senile joke is ok because I am just as ancient as these legends!!). The tracks certainly fly by, but I am personally not looking for Rime of the Ancient Mariner in this genre. Even though the tracks are quick as hell, the sizeable riffs and rhythms are amazing and like fellow Melbourne grinders Sanctioned exhibit, they lovingly cram tons of creative song work into every track. And there is as much thrash and death metal (and even some black metal leanings) as well as straight-up grindcore. But the groove in most tracks, like Blood Duster did so efficiently in their key releases; is the undercurrent that makes you crave the next track so much. Again this points to band members that work well together and understand the immediate effect that solid grindcore should have on the punter. This is bloody, hectic and caveman-like music without a shadow of a doubt, but the craft is high-level and intelligent. Weird eh, gory lyrics about murders and killers, but songs composed like nuclear physicist-level metalheads. Many songs certainly sound similar, but that's cool; I don't throw on a Cannibal Corpse album for eclectic musical soundscapes. The exception to this Church of Bones which has subtle Swedish Melodic Death elements and some clever space in between abrasive vocals and razor-sharp riffs. Easily an album highlight as well as the bludgeoning violence of classic tracks like The Butcher, Body in the Bin, Bleed for Me and the huge single Bloodthirst (the clip is wicked fun and is linked below, a must-see!). The album is an instant classic with its aggression, groove element and dedication to the temple of grind. It's also heaps of fun to listen to and that is refreshing compared to so many albums that are deeply embedded in their own self-importance and arse. This is killer and drops on the 15th of July and is one of the year's best albums and is out on the fucking rad Disdain Records (with Spikerot Records overseas).
here's the link:
https://www.disdain-records.com
(and FFS check their sick merch out!!)
Listen here and please disturb your neighbours:
https://open.spotify.com/album/3qMh5Hjuhvsfud0TyuK9sq?fbclid=IwAR3JfPbD9UenIqAZZ-tNye0KJiFAeGhBBngM43yTog4Qsl6mg1JPSX1HWdc
watch this:
https://www.youtube.com/watch?v=M28FvZghyn8
get Antisocial:
https://www.facebook.com/remainsmelbourne
and all things Remains:
https://linktr.ee/remainsmelb?fbclid=IwAR05EQNEhQqz1I9aJKFpSIBJauZw1EYcRtW7ZNqZbwNkfBwGTWWoj_xAu9E
and here is a cracker of an interview I did with their legendary vocalist Tony who is not only a sensational singer but a top bloke who is pretty chill and open to a decent chat without any arrogant attitude that one may assume given his pedigree in Australian Extreme music. We chatted about the band's beginnings, the album recording, influences on the album, some of his other bands/projects and how stoked he is to see the release drop and also the album launch in August.
Enjoy!
The album launch tickets are available here:
https://theoldbar.oztix.com.au/outlet/event/e4710900-2ff0-4e19-915b-bc0a7c041c28?Event=143783
Get into you crazed Remainiacs!!!.