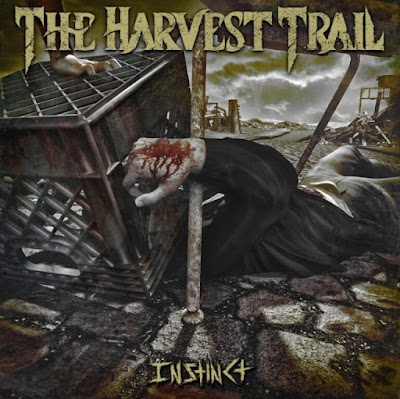 FFO: Thrashy, fast as fuck melodic death metal. Sounds like Obituary crossed with Coroner....yes that incredible.
This band snuck up on me but has members from well-established metal bands as evidenced by the stunning slab of extreme metal this band has dropped. It is equally furious, fast and crushing. The vocals dominate as much as the organ slicing riffs. The tone is heavy, but the sense of melody balances things out perfectly across the album; it definitely reminds me of stunning songwriting by bands like Coroner, Kreator etc.  Whilst there is not huge variety across the album, that is put aside as Instinct is just so savage. Not much space for breathing or reflection, just pure aggression. But just like Slayer's Reign In Blood-that is massively appealing. Sometimes you simply want an album to beat the shit out of you.
Scintillating stuff here and highly recommended. Nil weak shit here, just fantastic thrashy death metal with wicked samples and brilliant song structure. Every track is killer.
Grab it here:
https://theharvesttrail.bandcamp.com/releases