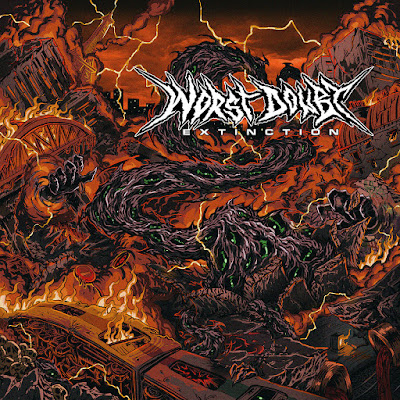 Epic and metallic hardcore from Paris and this jam ain't about berets or baguettes, trust me. This is nasty, riffy hardcore that does a killer job over the mighty ten tracks.  The key takeaways from this release are: the riffs are big as mountains, the vocals fit perfectly and the groove/crossover makes for some killer and dynamic tunes.

Dehumanized is so catchy and crushingly heavy on every level. Great start to the album and then Imposters Reign hits the lofty heights with mad echoing effect on the vocals, insane and creative tempo changes and some definite Power Trip and Gatecreeper vibes that dominate this bands overall sound. Definite metal influence as much as classic NYHC and current flavours. The title track has an amazing chorus that echoes in your skull long after plus deep grooves and is a clear standout of the album. Despise Death follows thru with classic metal riffs and some crushing breakdowns. Path of the Blind is also a fave simply because it has amazing song structure and the whole thing totally pummels you. It's a sneaky song, that makes you think you know what's coming up next and takes some impactful twist/turns and like most tracks have massive guitar mastery dominating. Crushed does what the label says and has great and dirty gruff vocals, that feed the anger of this track and some brilliant basslines and riffs. You almost think the album is going samey, but then they add amazing changes to each track that keep it vibrant. The Tormentor is as metal and crossover as it gets and isn't a gamechanger but just works with the tone and automatic headbanging effect. Filth in The Wound closes this outstanding debut album and shows the band's progression from their earlier releases. This tune is so filthy, gravelly and hurtful in the way we love God's Hate; aggressive, thuggish hardcore with beefy musicianship. Hell yes!.

Well recommended and out now: