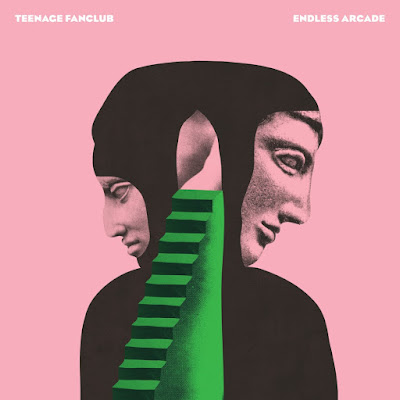 Endless Arcade is this Scottish institution's 11th album and the first without Gerard Love, one of the band's co-founders. But the overall sound doesn't change, there is probably even a touch more space in the overall final product. This is well-architected jangly, relaxing indie music that never chooses to dominate your senses. But that's utterly fine, Teenage Fanclub may have "rocked" slightly more back in the day, but they excel at non-challenging soundtracks. If you will, charming background music that sits between 60's pop and Americana.

Tracks like Home, Warm Embrace, In Our Dreams and I'm More Inclined are the lively gems that sprout similarly on most Teenage Fanclub albums. And these types of songs always remind me of times when their signature tunes dropped at a club and you would run to get on the dancefloor. All have the key elements, sublime vocal melodies and harmonies that gel with nostalgic riffs, exceptionally agreeable basslines and organ sounds. These tracks have sufficient pace to always grab your attention and request repeated playing immediately. But the challenge particularly on the last three albums (that are vastly and sonically so different from their best work to my ears; Bandwagonesque, 13, Grand Prix and Songs From Northern Britain) is to find the other tracks that need to breathe a little and open up. The types of songs that may have initially annoyed you and become classics that grow. Luckily this album has these in spades and upon the fourth or fifth listen songs like the title track, The Future and Everything Is Falling Apart and Living With You starts to blossom and grow as earworms. There are definitely other tracks that will stand out more, but some songs seem a little pedestrian or too dull at this time. Not average tracks, just possibly tracks that could be b-sides or help in the trimming of this release. The Sun Won't Shine On Me and Silent Song are absolutely harmonic, but just sounds too retro and overdone, that's not a dig but whilst other tracks expand with slightly more keyboard action and guitar tangential wisdom, these two tracks just didn't work for me. But that's fine by me as most of the album is exceptional and it shows the band has many more albums left in their career.

'Endless Arcade' by Teenage Fanclub will be released on April 30, 2021
Available on translucent green pink or clear vinyl, CD and limited cassette: