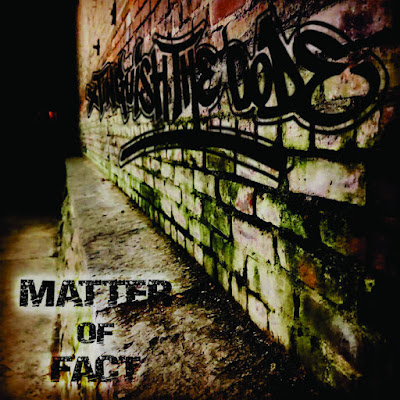 Xtinguish The Code - Matter Of Fact EP review and interview. FFO: Chunky, Gnarly NYHC with bite/skill. This gritty EP from these Bronx legends is everything you need in proper hardcore. This is free from bullshit and simply hands you on a plate what you need for a tasty hardcore release. 1054 Records is getting an absolute stranglehold on the American Hardcore scene and this is an excellent case in point.

Open up the pit with the nasty beast that is The Beginning Of The War, this draws you in with a smartly placed sample to begin and the moshy riffs just attack your ears from the moment they arrive and this bodes well for an extremely confident EP. Attitude Adjustment is a crunchy, brisk song with definitive shouty, almost punk vocals and death metal-like guest vocals violently combine in the style of a nuclear weapon with a flooring effect. XTC have a solid formula of explosive drums and mean riffs that move you straight away and that dynamic energy is so damn addictive. 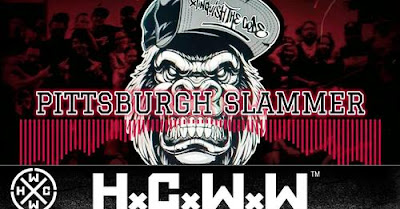 Pittsburgh Slammer is as insane and upfront as expected and has a solid ambulance-like riff that is ironic because you will need a paramedic after this wild beatdown-style track. This is one aggressive riff after another and the vicious nature of the track drips in vitriol, and that last riff is torturously slow and crushing. 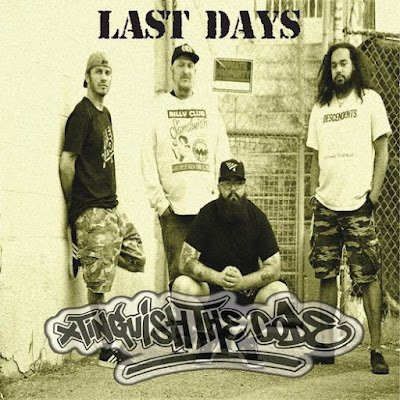 Last Days is one of the many highlights on this sturdy EP and the guys recently dropped an exceptional video for this tremendous narrative style of song. The song is super attacking with many justified targets, it's just a monstrous song that has that colossal line:

THIS WORLD WASN'T MEANT FOR ME!!!!

XTC easily would slay as a live band, no fucking doubt!. Then to ensure no chance of a breather, you get slaughtered by the insanely Biohazardy title track. Now adding groove in metal or hardcore often sucks or makes a band seem cringe, but in this case, you have a perfect pairing of aggression with that almost Body Count style of clever breakdown, this is intelligent and sublime songwriting. When a band utilises subgenres to add flavour, you have a very well-rounded band. XTC just sounds like an extremely tight and well-oiled machine that is at the top of its craft. They certainly have a knack for cramming in so much in short-length songs, impressive as fuck!.
Burn is the gigantic closing song, and this is a definitive showcase of everything we have heard so far. This track has a palpable tension, and wild energy and finishes off the EP in a burly and brisk manner.
The EP is solid as hell and makes you crave a full album, don't keep us waiting boys!!.
OUT NOW:
https://1054records.bandcamp.com/album/matter-of-fact-ep
CDs:
https://1054.bigcartel.com/product/xtinguish-the-code-matter-of-fact-cdep
WATCH THIS:
https://www.youtube.com/watch?v=qaLI2UDaowo
and this:
https://www.youtube.com/watch?v=o-WhRrhjEsM
GET ANTISOCIAL:
https://www.facebook.com/XtinguishTheCode

Greetings brothers, well Matter of Fact is a really crushing effort and totally builds on from the debut Step to My World, how happy are you with this release, I believe despite the fact I loved your debut this is far ahead in terms of sound, give us the head’s up on the what happened in between the two releases and also how this EP came about?
Thank you, We’ve been working hard to keep that old school, street, Bronx Hardcore style alive. With this being our second release we’ve already broken into each other so we know what everyone else in the band wants to do and can do. We’ve taken that and pushed it to another level incorporating a number of different things to preserve that sound yet keep it fresh and keep the listener on their toes at the same time. For me, being that this is my first time fronting a band Step To My World lyrically is an introduction to what’s to come next and this EP Matter Of Fact takes things a little further. It gets angrier and it gets more personal. 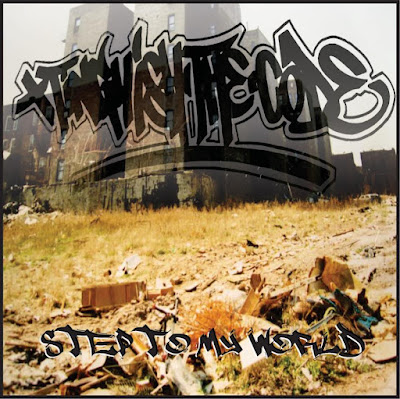 The Production is very fly and dynamic as fuck, but the real powerhouse is the overall sound isn't it?

We take elements of so many different things to mould our sound so we stand apart. We take elements of Punk, Thrash, Heavy Hardcore, even some structural elements of pop and many more things and we create what Xtinguish The Code is. In simple terms, we don't cage ourselves into a genre, we play what the fuck we want to unapologetically. If you listen closely you'll see that each of our songs is different. Nothing sounds the same yet they maintain the heaviness we bring to the table.
Lyrically it’s very acidic, tough as nails but pretty damn positive? What's the background to the killer lyrics, besides society being damn fucked?

As I (Kevin) said in the first response, the lyrics to Step To My World served as an introduction to what I would dish out lyrically in the future. This Matter Of Fact record touches on personal struggles, hardships and fucked up social issues. Most of it is positive because I want to influence like-minded people to keep pushing forward even though it seems like the ills of depression, society or past trauma hold you down. This record essentially sends the message of going from negative to positive and living life to the fullest despite all the fucked up shit that’s happened in the past. 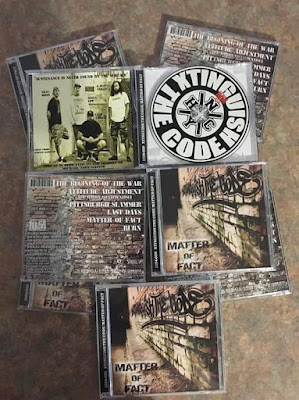 You have played some damn cool shows with some frankly awesome bands, what are some live highlights so far?

We’ve played plenty of shows both in New York and outside of New York. Some of the bigger names such as D.R.I, INTERNAL BLEEDING, MADBALL, DESOLATED, BRICK BY BRICK, ACHE, SKARHEAD, and SWORN ENEMY just to name a few. But more so the bands we’ve met along the way and made family with. First and foremost you’ve got Brace For Impact from Clearfield Pennsylvania. Those guys play very in-your-face hardcore/metal very heavy, very groovy, and very angry. Great great stuff. Along with Assault On 5th, Belvebuth, Video Massacre, Samara and so many more The guys in these bands are great dudes all around and they’ve made Clearfield our second home. Not to mention Orlando Furioso HC from DC. I’ve gotta mention our family in MAAFA from Brooklyn. We’ve known Flora for years and she just radiates that positive, super hospitable, family-oriented hardcore vibe. Flora’s the type of person who will support you till the day you fucking die. MAAFA is def worth checking out. Their music is just MAAFA. Other great New York bands worth mentioning are Silence Equals Death, All Shall Suffer, Beast From The East, Chains Of Misery, Humantrainwreck, NYC Shootout, Targeted, Physical Altercation, PRDX, Abscesspool, OMNISM, and so many more.

You are very clearly an NYHC band, who originally influenced you, and I know it’s generic, but I am a huge NYHC fan and even in that genre there are so many variations, also how did where you live influence your sound? And what are the most kicking bands from your region at the moment?

We all have our influences anywhere from Bad Brains to SLAYER. For me (Kevin) I’d have to say Billy Club Sandwich, Irate, Fahrenheit 451 and District 9 for the energy, flow and lyric writing. We feel that those bands are often overlooked in comparison to bigger bands in the New York scene. We want to try to bring back that style of hardcore. Bronx Hardcore. There are not many bands like that out here anymore. There’s us, Enziguri, and Crazy Eddie.

You certainly produce some sick arse music, but the fans love how you also do killer and pretty wild merch and excellent tongue-in-check promos for gigs? I love that mix of aggression and piss-taking, so essential as we all know band stuff is a hard graft? 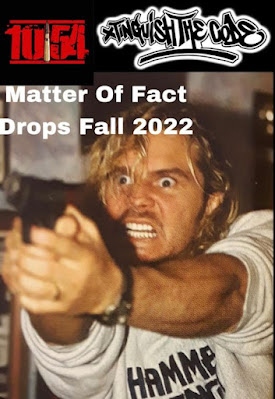 That all comes from the master of fun in our camp, Mr Dusty Onita. He runs 90% 0f the merch. Dusty and I (Kevin) are big fans of wrestling and food so once I saw him making those promos for the new record I had to jump in because it was both genius and funny. Tray brings a lot of merch ideas to the table. Does all the small stuff like stickers, pins, wrist bands and even condoms! Creates the formatting art for the CDs, prints and hands out promos at shows and gets our banners made. We’re also trying to revive the promo era of hardcore before the internet was a thing.

We’re currently booking up for 2023. To end off 2022 we’re playing December 10th at the Brooklyn Monarch for our sister Flora from Maafa’s birthday show featuring MAAFA, Luxury Teeth, The Screws, Jo Mercado, Silence Equals Death, and Orlando Furioso. On December 30th at The Meadows in Brooklyn, we’re playing Ralphy boy and Matt Ray’s birthday show featuring Disassociate, Deathcycle, Drunken Rampage, KARTEL and Examine. All 2023 dates have yet to be announced so stay tuned and follow us on Facebook and Instagram for more updates. Videos always are popping out so no worries there. Merch can always be bought through Dusty on FaceBook. He's always running specials to get the name out there. As far as an Australian tour … if someone pays for XTC to come out there … it might be considered lol

How did the band get into music? What inspires you?

So going back towards the beginning of the interview this is my first time fronting a band. Before this, I played the guitar in and out of bands for about 10 years. Back then what had inspired me to play was to be the best at my craft and honing into it. Now it’s changed drastically. I feel that now it’s about using my voice and being relatable to the audience because we all have problems. No matter what they are, this is why we found hardcore. At the end of the day, it’s all therapeutic. Do I want to be a rockstar, tour the world and have this be my only “job”? No. Hardcore pays in passion, not cash.

What do you fuckers do outside of music?

Outside of music, we are all your average joes. We all have jobs and families. So besides just being your “forklift operator” or “IT Tech” … we’re very angry individuals in the studio

What current bands and releases do you dig? Give us your recommendations?

There’s a lot of great stuff out there now. You’ve got Brace For Impact- Cogitate, Capo Kong- Extortion, All Shall Suffer- The Way Of Pain, Cycle Of Abuse- Ultimate Suffering, Orlando Furioso- The Distrikt, Silence Equals Death- I’ll See You On The Other Side, Chain Gang- Invincible Demon Soldiers, Two Piece is coming out with something new soon, those guys are like family to us so we gotta put them here.

Any final messages to the hardcore family worldwide? 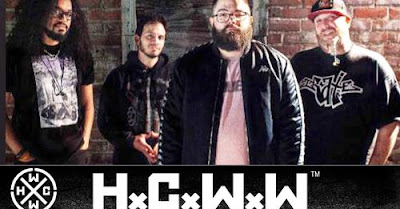