The Dying Song & Dying A Little Inside: A Slipknot Single & Video Analysis By M H Thomson. 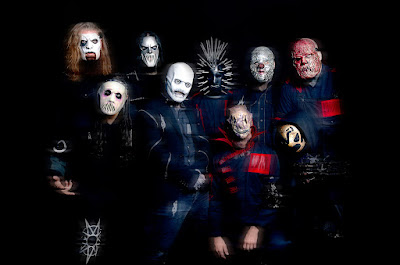 The Dying Song & Dying A Little Inside: A Slipknot Single & Video Analysis By M H Thomson

Gone! Gone, it seems are the days of slick and clever song titles from Slipknot. Fun and witty portmanteau such as “Disasterpiece” or “Sarcastrophe” are now naught but a fading memory. The title of what is to be the second single off their upcoming seventh studio album is the incomprehensibly unimaginative “The Dying Song (Time To Sing)”. A title with all the allure and intrigue of a mediocre deep cut from a decades old Marilyn Manson record. ‘Tis rather a disastrous start for what is actually quite an agreeable tune.

Mine, much like most people’s first listening of the song was via the music video they released this morning on YouTube, so lets start there shall we. The clip begins on an unpromising note with a very blingy mirrored rendition of the famous Slipknot S logo appearing. I think a call from Snoop Dogg is on the bands’ collective horizon, he wants his Jeweller back.

The beginning of the video proper opens with the sight of an unfurled white lingerie mask with makeup painted on it. Continuing the band’s recent fetish for masking the cast of its videos, rather than just themselves (a holdover from the “All Out Life” video). It then cuts to an ever widening shot of a woman wearing said mask standing in front of a group of, what appear to be, American college sorority sisters who’ve dressed as the burglars from the 2010 feature film The Town for Halloween. As to what purpose this opening set piece serves, your guess is as good as mine.

Then the music starts with an acapella stanza from frontman Corey Taylor, and it’s actually quite good. The opening lyric of “Put your hands into the water, let your mouth go sick and dry” acts as an eye or rather ear catching build up to the stomping snare rolls that precede the classically Slipknot triplet laden main groove. This introductory stanza also acts as part of the song’s chorus, in this case the latter half. A trope Taylor loves employing. Vol. 3 The Subliminal Verses “Duality” being one such prior example. Taylor’s subtle vocal fry really packing on the tension, a synthesiser lazily oscillating in the background as they wait for the drums and guitar to kick in, which bolsters the brutality considerably. The feel and picking pattern of the driving riff they very quickly settle into is very reminiscent of previous belters such as “(sic)” and “The Devil in I”. This draws the band to where they are most comfortable, their heavy bombasticity. Although, for a band so well known for its experimentation, the riffs' similarities to these earlier tracks reeks of the writers resting on their laurels. The main verse starts with haste, with all the vitriol Taylor can muster, ranting on at break neck speed about what appears to be his disillusionment with the big business oriented political machine of the 21st century. This only becomes truly clear when he hits the eighth line of the verse, screaming “Only the bosses on the board”.

Something that didn’t need a 21st century update however is the set from the A Flock of Seagulls “I Ran” video the band appear to be performing in. Every time the white fluorescent lights flash through the mirrors onto the red flooring (which is about every half a second) I get flashbacks to the tin foil carpet and tight red dress shirt from an eighties video I’d rather forget. The strobing of the lights and frantic pace of the jump cuts in the edit save the video, as it perfectly captures the chaos of the song. Slipknot once again pulling their tried and tested party trick of frenzied stimulus overload, working to great advantage here. As you can probably tell I’m a little tattered and torn on whether I like this aesthetic or not. Pardon the somewhat paternal pun, I couldn’t help myself.

The melodic break toward the end of the main verse (behind the lyrics “Forget Deny Ignore”) absolutely slays. With all the weight and brawn of an Iowa era chorus, I feel this riff perhaps would have been better served as the chorus rather than just a coda to the verse. The actual chorus deflates the mood of aggression slightly with the introduction of Taylor’s clean vocals. This feels fairly underwhelming the first time you hear it, as it subverts expectations with its lack of brutality, but upon subsequent listenings, the hook sinks in and wins you over. Overall the riff behind the chorus comes off a little flat. That is, until the end of the riff when it changes up slightly in preparation for the transition to the song’s bridge. Still a solid effort from the Knot though.

Visually the most exciting part of the video is our first opportunity to see the band’s new masks in action. A few noteworthy examples include: Taylor’s shotgun barrel eye sockets that jump right out at you. Drummer Jay Weinberg’s new white mask, a truly great evolution of his previous one, harkening back somewhat to the look of his predecessor Joey Jordison’s Kabuki stylings. During their apparent tenure with the group, Snoop Dogg’s Jeweller seems to have been hard at work designing percussionist Shawn “Clown” Crahan’s new mask. Resulting in a similarly mirrored and similarly blingy affair to the S logo from the beginning of the clip. Unfortunately for Clown it comes off as a touch ostentatious rather than irreverent. Slipknot’s other percussionist, the recently identified Michael Pfaff’s new mask, on the other hand, took rather a turn for the better. More akin to a found objects artist's interpretation of a rotting Jack O’Lantern in the medium of leather than a Mexican flatbread. It makes for an honestly striking visage to behold. Sticking with the found objects artist analogy for a moment, Turntablist Sid Wilson’s new look is another masterpiece. His mask looks like this hypothetical artist created a mix between an astonished daruma doll and a smiling Totoro with bits and bobs found in a scrapyard. This is complimented nicely by his robotic arms and his old mask entangled in a net. The net strapped to his arm like a shrunken head tied to the waist of a tribal Peruvian cowboy.

The track’s bridge is a hive of activity starting out with the militaristically tight chugging of Mick Thomson’s (no relation) guitar. This backs a myriad of lead breaks from their other guitarist Jim Root. All this is supported by a cacophonous whirlwind of drum fills and low harmonies from The Knot’s rhythm section, consisting of Weinberg and bassist Allesandro Venturella respectively. As the song’s bridge gives way to an atonal but tasteful guitar solo from Root, we arrive at the all but mandatory, snare only, marching beat supplied by Slipknot’s two percussionists: Clown and Pfaff. This brief percussive burst leads us squarely into a slower variant of the aforementioned verse coda riff. This is undoubtedly the highlight of the track, finally reaching the brutality left wanting for in the chorus, Taylor screaming his bollocks off with abrasive conviction. Sadly however, this section leads us straight back into said chorus and the conclusion of the tune.

The video closes with the return of the white lingerie mask thing ma’ do hickey from the start, this time being placed in a swimming pool with all the grace and care of a Hindu priest giving offerings to the Ganges River. The import and thus inclusion of this gesture is still a perplexing mystery to me.

By and large “The Dying Song (Time To Sing)” is yet another example of Slipknot producing a perfectly enjoyable but far from legendary single. To that end, I get the sinking feeling and sneaking suspicion that Slipknot are becoming the new Metallica. In as much as they are equally iconic, as one of the biggest and most respected acts in the Metal genre, but are also equally unable to recapture the lightning in a bottle witnessed on their first four albums. Whether this sentiment endures beyond the 30th of September when the new album, titled The End, So Far drops, remains to be seen. Personally, I dearly hope they prove this sentiment wrong. 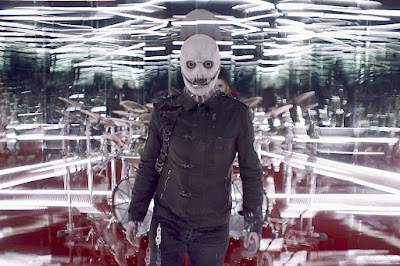