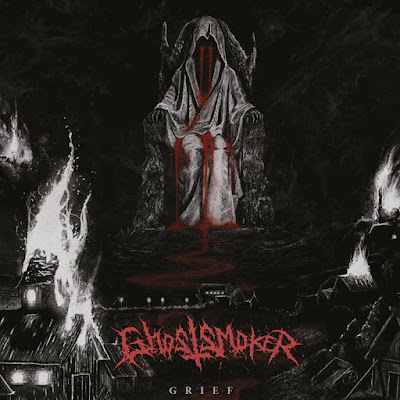 Ghostsmoker-Grief Ep review. FFO: Bleak and Gritty blackened doom. This is wild because initially with such a cliche name (sorry, but it is so true for this genre) you would expect the usual dullness of a regular doom band. But no; this release has accomplished thick, forbidding gloomy soundscapes that will hold your interest. And I make that statement because I am a huge fan of Christbait and every doom/sludge metal band has to be intriguing and non-cookie cutter for me to even listen more than twice. Thank fuck these metalheads can produce the goods.

This is four tracks of hostile and grim doom and it never moves into stoned hipster shit that is dominating so many scenes. Astral Realm is a dirty mofo of an opening track with that psycho buildup which is full of intrigue and then the black metal meets horror movie vocals cut right through the explosive sludgy violence. It takes your doom metal basics and makes them sound deeper. This EP has lyrical themes of loss and trauma and that's very apparent throughout. 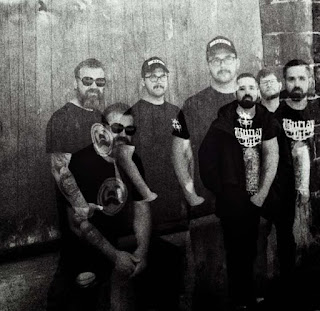 Eternal Veil remains on the dour side of life and again has a killer moody intro and fuck me the vocals are super cool on this track as well. And it makes a refreshing change from all the generic I am So Stoned Man vocals that are so common. This has bucketloads of groove and also shows off the sheer power of their intense drummer. The title track is up next and it is unrelentingly heavy. It also has some cool vocal transitions and slight tempo changes that grabbed my attention as well as the best riff Sabbath never made, but should have. Whilst the first two tracks were decent as hell, the space and depth on this track really show how solid this band is. The section from 3:33 really was hectic and has the combative sounds I really crave as a listener. There is almost a noise/industrial crossover vibe I felt as well. The point of difference is key when particularly in Melbourne you have a sea of quite similar doom bands as opposed to very unique bands like Religious Observance and this band. Closing out the EP is Mass Grave, which begins like a raw black metal band covering Sleep and moves into belligerent paced blackened sludge perfection. I am unsure of the band's history, but the songwriting is too impressive to be newbies recording their first ever recording. This is a release to be celebrated at a gig or with quality over-ear headphones as the slight nuances are really worth listening for.
The production is fantastically forceful as expected from Mr Jason Fuller of Goatsound, and really pushes the fierce aspects of the band. Cracking Ep and I am looking forward to a full album of this depressing grandeur.
Out now:
https://ghostsmokerau.bandcamp.com/album/grief
Watch this:
https://www.youtube.com/watch?v=5-a0lBapMHk
Antisocial vibes:
https://www.facebook.com/ghostsmokerband/