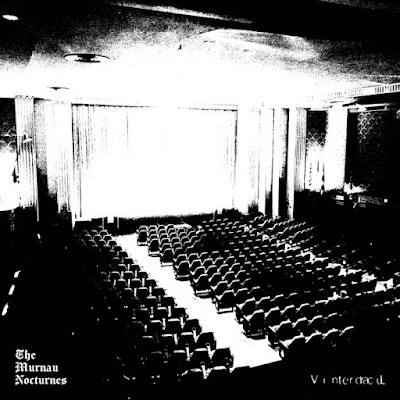 This is a cool release and even more so because from the imagery and background to the album I really expected some gritty and underwhelming generic black metal album tbh. But alas, no this is a great album with so many interesting tangents and its originality and composition is so rewarding. I find this is not really a black metal style release, it has more in common with Bauhaus, TSOL, Christian Death or even Samhain. Thus it's pretty gothy/deathrock/punk but with a wicked metal foundation, but I don't get the black metal referencing tbh. But labels aside, it's a wild ride. The album is described by the artist thus:
A fictional version of F.W. Murnau, director of the silent vampire film Nosferatu, comes to Hollywood in 1928 to sign a big contract with a major movie studio. It is a deal made with the devil.

He soon finds himself haunted by the ghost of his one-time star Max Schreck who warns him that the deal he has made will result in Murnau losing everything — his films, his business, his reputation, and his life.

With the arrival of Dracula, starring Bela Lugosi, the increasingly tormented Murnau sees his star eclipsed and his artform — silent pictures — cast aside in favor of the new talking films.

Murnau descends into madness and his films and career are destroyed. A saving grace is the lesser known release of a superior twin to Lugosi's film produced in Spanish and featuring nods to Murnau's legacy. But too little, too late. In the end, the devil returns and comes to claim his final prize — stealing Murnau's skull from his grave.

So call it a cool concept album or a soundtrack album to a non-existent film, but the themes that run through it definitely focus around the above description. Most songs have this eerie gothic synth seeping thru the pores of scintillating harsh guitar riffs, the vocals are raspy and literally sound like someone or something rising from a grave, which obviously works with the vampire thematics. But this is where the magic is evident, these outstanding compositions and/or song structure is so damn good, and bear in mind this is a debut album; it is quite confronting. I mean this is brilliant stuff, the placement of riffs and synth as well as vocal timing is so top tier level.

But the whole release also rocks fucking hard, literally from the start of Hollywood Vampires, you know this band has got the songs to slaughter you live and likewise with killer tracks like The Deal(my fave track tbh), Four Devils, Metronome and Conde Dracula. Every track is grim as hell, but has that 80's punk swagger and grabs your attention pretty damn quick. It has so much atmosphere and the low key production is apt and dynamically gloomy.

I have nothing else to say but buy this album, it's so original in a sea of clones and boring bands that want to sound like blah blah; this is original and so refreshing. Can't wait for the next instalment!!.