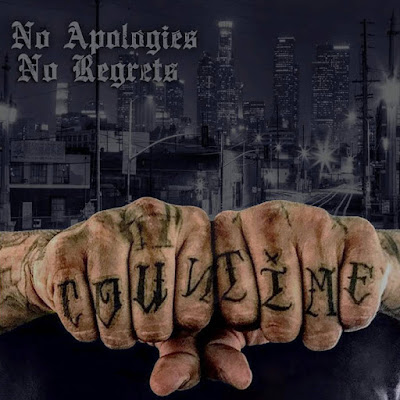 Countime has been kicking since 2003 and has always been an absolutely solid mix of straight-up hardcore mixed with West Coast flair and real-life street experience. They have had a solid metal influence in their overall sound and almost a hip hop sensibility as a result of being a true L.A. underground band. But more recently; in late 2019 the band gained the attention of Producer Billy Graziadei (Biohazard, BillyBio) and COUNTIME was offered the opportunity to join the European 2020 Persistence Tour and share the stage with the Gorilla Biscuits, Agnostic Front, H20, Street Dogs, Billy Bio, Wisdom in Chains, and Cut Throat L.A. After the tour was finished the Corona Pandemic Virus emerged and shut down all forms of life and entertainment as we knew it. COUNTIME used this time to focus on working and recording with Billy Graziadei. The stunning album here (and also a killer The Pandemic EP in Feb this year) are a result of those powerful recordings. This is the band's finest moment and a perfectly curated album with all the subtlety of a sledgehammer to your skull. This is what true hardcore is: all killer, no filler, no bullshit and straight-up aggression on a plate. 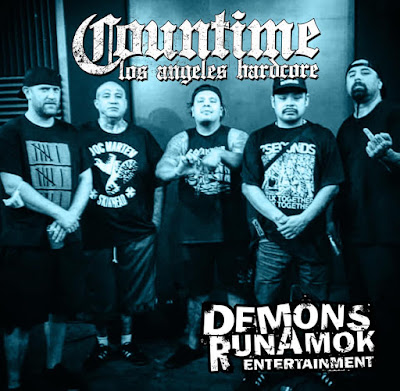 This substantial release consists of 17 epic tracks that range from very short (but exceptionally well-placed) interludes to mid-length anthems that declare their intent on the very first listen. Given Billy Biohazard's involvement, you would expect everything is very much in your face. Thankfully it is and the sheer intensity is well appreciated. There is simply no chance to take a breath, this is a pure action-packed album of dynamic attack. And 30 minutes of pure fight music.
The album is full of so many standout tracks: No Time takes the Suicidal/ No Mercy vibe to the next level and Leva is just gritty and nasty hardcore from the gutter with guest vocals from the mighty Paul Bearer from Sheer Terror on the chorus...yes, I am serious!. This is gold and is hard as fuck. Keep It Movin lyrically and sonically is real as it gets( I use any opportunity to drop a Sworn Enemy reference..haha!) and is a classic anthem for the ages. Then in case you didn't get the message, Switched Up blows your eardrums with raging riffs, staggering tempo changes and vocal gymnastics. This was one of my fave tracks over the first half of this killer release. The hits straight from the pit continue with the frankly wondrous Juzgarme (awesome video for this, see link below), Slow Your Roll ( that could easily be off AF's Victim in Pain), Fugazi, No Turning Back(another album highlight for me with its classic SXE hardcore head nods), Byegones(this straight up just rips so hard on every level, especially the gang vocals) and Stay in your Lane which is another clear standout with its attitude, skill and eloquent song structure. Requiem is the utterly ideal closer for the album and it works so well with its slower, almost reflective and repetitive guitar work that echos the emotive vocal presence. No Apologies, No Regrets is an accomplished, catchy and aggressive album that is a result of a band that knows what its particular skill set is and via sublime production amplifies this to an enormous and stunning level. I loved how it is so raw and thuglike in its delivery, yet as a soundscape is one damn clever and well thought out album. Any band that can come across with the firepower of say 100 Demons, but deliver a product as incredible as Sick Of It All's Just Look around or Agnostic Front's One Voice. This is a highly rated and classic album from Countime.
Out now:
https://demonsrunamok.bandcamp.com/album/no-apologies-no-regrets-2
Watch this:
https://www.youtube.com/watch?v=9r3PT10isj0
and this:
https://www.youtube.com/watch?v=Fi90DNGwSXM
Antisocial:
https://www.facebook.com/CountimeLAHC