Go Ahead and Die-S/T album review and Interview. 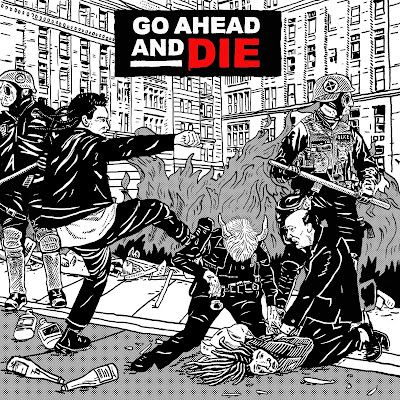 Go Ahead and Die-S/T album review and Interview.

Wow, this one caught me by surprise. Not in that the band members were lacking in skill even remotely, I mean Max Cavalera is a metal god and an absolute creative genius that formed two of my fave bands ever, Sepultura and Nailbomb. Then you have his son, Igor who has been in his own brilliant bands and has epic skill and talent. Add an amazing drummer in the form of Zach Coleman, who is an utter natural drumming beast that adds a warlike tone to every track. This is a three-piece band with so much firepower and energy. Plus they play a style I personally worship; a mix of old school metal be it death/thrash or doom and mix it with everything from classic crust in the vein of Doom, Anti-Cimex, etc to the pure metal glory of Venom and Hellhammer. And it's not forced or a carbon copy, something I rant on about; too many new bands that sound like a feeble version of a well-known band..just don't bother!. This sounds fresh, even though the influences are pretty much the first or second generation of their genres. This is one brilliant and crushing album.

The first two tracks Truckload of Bodies and Toxic Freedom just pile in like an overpowering avalanche and are full of insane riffs and punishing drums, a sonically satisfying start to the album. Also at this point, in case you aren't familiar with Igor; you realize very quickly he is an excellent musician and marvelous vocalist. This is his project, his baby and he just happens to have impressive co-workers. His vocal range dominates the album and he also plays high-caliber bass on it. His resonant tone is very oppressive and fits the music perfectly. Next up is I.C.E. Cage which is a shredding mix of early Venom meets peak Sepultura thrash. Isolated Desolated follows and it is an epic track with some clever tempo changes and starts off like Dark Throne's more punk/crust influenced albums(their best period IMHO) and around halfway through the track, the pace and aggression turn up to 11 and makes it a classic unhinged track. From here on the release gains more ground and uses its fantastic influences to deliver nasty track after nasty track. The first four tracks are excellent, but from track five onwards is a broad showcase of how powerful and masterful this band is. Prophets Prey is a shining example of this. The initial build-up is devastating and demands your attention and would initiate immediate extreme moshpit action. And not only are the vocals in perfect harmony with ridiculously mammoth guitar magic but the track (like pretty much every track on the album) is structured in a flawless way. This despite being straightforward angry music, is definitely well written and thought out. This track smoothly slows the pace down and it goes very industrial in the vein of the holy Godflesh. The audio slaughter continues with the aptly named Punisher. This is an absolute tempestuous track, dark and just a perfect transition from the last track. Again this band wins you over because they mix the genres so well, this has an industrial grim tone but also has also enraged death metal and thrash stylings that work so well. Track 7 guarantees no rest time either with the wicked El Cuco; this one excels in doom/early thrash and has some crafty twists in the song that make you think this is one wild and intelligent release. The title track then grabs you by the neck and throws you in a storm of crust punk and Discharge/Venom/Bathory worship; this would be insane live as the riffs are like classic Kreator meets Concrete Sox. Worth Less Than Piss is definitely a fave track, the basslines are epic, the vocals punk as fuck and it just delivers in every way. (In The ) Slaughterline is the second last track and the band reminds you here that it's not all aggressive gusto and punch, but craft in the delivery. This solid track changes pace and vocals adjust with each change, and the guitar work is so devastating and the fierce drums just highlight how tight this band is. Again another track made for the moshpit. Album closer Roadkill is massively different from the rest of the album with its vulgar and sludgy tone and is the album's finest hour. Not only lyrically does it hit hard with content regarding the plight of homeless people, it just brutally smears you with its grime and overloads you with its bewildering musical pandemonium. It is an incredible way to end a magnificent album.

I cannot recommend this highly enough!!!.

This beast is released June 11 via Nuclear Blast 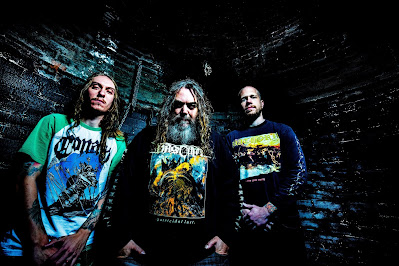 Interview with Igor of Go Ahead and Die.

Now here's an excellent interview I did with Igor, singer/bass/guitarist/chief protagonist of this amazing band. He was a real pleasure to chat to; very down-to-earth and very insightful about his music. It's great to hear his own musical journey and how he loves music. He was worldly, wise, and keen to smash out these tracks in some dirty small venues. Enjoy this great chat:

Again I encourage you to check this album out and enjoy an album of solid influences that is intense and intelligent. And it's just heavy as fuck!.