Blackhelm Iinterview and review of Dark Clouds of the Inferno album 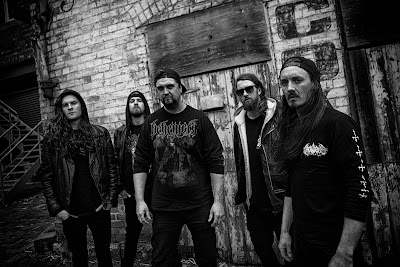 Blackhelm Interview and review of Dark Clouds of the Inferno album by Mark Jenkins.

Not only has this year been a cracker of a year for solid releases, but Australian albums are really shining through in an aggressive and dominating way. Blackhelm are very accomplished and striking, they have the perfect mix between dark drama and sheer brutality. Regardless of your tastes, be it in a live setting and with this killer album, you will be hooked on this nastiness.

Here's a cracking interview we did with the band's guitarist, Cam.

1-Tell me how it feels to drop the epic and amazingly heavy album that is “Dark Clouds of the Inferno”? I mean it is a pretty overwhelming album and it caught me off-guard in the best fucking way, Kudos on this incredible album. Not many bands can drop something so prolific as this release!

It feels pretty good man! We’ve all been living with this record for quite a while now and it's an amazing feeling to finally have it out there, we are all very happy with the end result!

2- What drew you to metal and what is it such a rewarding and sustaining genre of music to you? Tell us about your journey to heavy music and what led you into being in bands?

For me, metal has always represented total musical freedom. Today, there is literally no boundaries to where you can take creativity and composition within metal and that’s a huge part of what sustains us as players and as fans. My journey into heavy music was a steady path starting when I was younger with GNR/Sabbath/Maiden and later into Metallica/Slayer/Pantera as i got older and more and more into the world of playing guitar. From there, it just got heavier and heavier and even more out of control once I started jamming with others and just trying to create the heaviest, fastest riffs I possibly could. Haha, nothings really changed, the riffs are just getting heavier and faster!

3- Devil’s Horns firmly believes that music and art is the best crossover in the universe, how does that work for you as a band? Your band always has impressive artwork on each release as well as promos/flyers etc?

We absolutely feel the same. We worked really hard on the artwork and layout for this record and it has passed our wildest expectations. We have always sought continuity throughout our releases and related promos but this time I think we’ve really connected and it’s been great to see everything come together the way that it has. We’re super excited to start rolling out the various album related promos/merch and some other things we have planned for the rest of this cycle.

4- Live how does your music translate?, what topics underpin your songs? And what rewards you as a band?

I think the songs translate really well live.. there’s a good mix of groove and speed with blasts right alongside some more dynamic parts. We are quite conscious of how our set flows together and we’re constantly changing our setlists to suit different gig lineups and song changes etc. As far as the topics go, a lot of Blackhelm lyrics are about the ancient world.. a time when life would have been more grand and extreme.. which is mirrored in the riffs. If you take “CARVING A TITAN” for instance, when I listen to that opening riff I like to picture it as an ancient stone wall.. something impenetrable. It doesn’t get much more rewarding than releasing an album and getting to play shows around the country in support of it alongside legendary bands like Psycroptic and King Parrot.

5- Any overseas tours or major gigs you would like to tell us about it. Be it the current tour or future plans?(Because you deserve to be playing worldwide on huge stages!)

Haha thanks! Appreciate the kind words mate! Nah, no Overseas tours booked in as yet, but we will definitely get to that at some point in the near future. Our next gig is with BLOODBATH (sweden) at Max Watts in Melbourne on September 15 as part of the SOUTHERN SLAUGHTER Festival.

I think this album release and the related shows are hands down the highlight for me thus far.. It was an incredible experience making the album and I couldn't be happier.

7- On the flip side, the struggles, and challenges?

These 3 have been my solid rotation for weeks, all savage new releases: Deathspell Omega - The Furnaces of Palingenesia 1914 - The Blind Leading The Blind Kriegsmaschine - Apocalypticsts

Thanks to everyone that has bought merch / picked up a copy of the new album or even streamed/downloaded it, we appreciate the support! Thanks for reading! 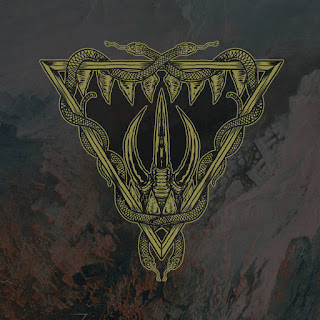 Review of Dark Clouds of the Inferno album.

Let me make it clear this release is somewhat melodic, but it is an extremely grim extreme metal with swagger. It's a fine mix of blackened death metal that is moody and catchy. And the riffs are brilliant and the execution is spot on.

7 out of 8 tracks are classic and the other track is probably a personal give or take, depending on your tastes. This writer is a pure fan of musicians that are craftsmen, not copycats and that is what is cool about this release. It's a natural progression for this band's previous incantation and releases. They have made the sound displayed here as their own, as opposed to most artists in this saturated genre.

Black metal and melodeath albums are often of relentless overkill on the many levels; both vocally and in terms of guitar wankery. Here Blackhelm simply use what is needed, this way you build the atmosphere and get crushed by the heaviness; and that restraint makes for an epic and well-crafted album as opposed to an album of tedium and utter boredom. Dark Clouds of the Inferno is an album that begs repeat listens.

The writer fails to pick any holes or flaws on this stunning release, but Ghost in the Flame just seems odd to me and doesn't seem that necessary, although it's moody, almost gothic and folky, in my opinion, it's misplaced on an album of such beastly aggression. But that's cool because the album closer, the title track more than makes up for this brief pause on the evil. And is probably my best metal track of the year!!.

Grab a copy because it's very unique and skillfully executed.

and you'd be insane to miss them on the amazing Sothern Slaughter Festival in Melbourne and Sydney. 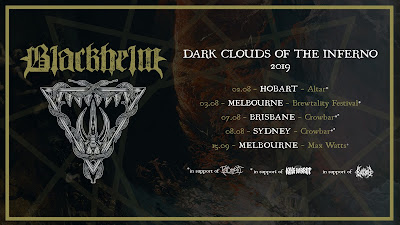