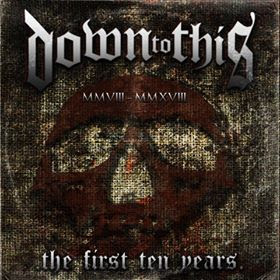 Heres the bio from this beast of a hardcore band:

Formed in the fall of 2008, four dudes who are sick of fake ass scenesters and trendy flavor of the month local bands, started a bare bones hardcore band dedicated to real, straightforward expression through brutal music and honest lyrics. DOWN TO THIS has proven its self as a solid force in North Carolina hardcore with a die hard following as well as an ever-expanding Worldwide fan base.

In December of 2009, they released the 6 song "LIFEBLOOD" e.p. leaving the kids clamoring for more.
In late 2011 they released their first full length "DIRT CITY" and took a break in early 2013 after a whirlwind of amazing shows with Nonpoint, Hed PE, Shadows Fall, Nile, Mushroomhead, and Hatebreed etc. 2014 saw the drop of the incredible "RELENTLESS" e.p.

This is a band that with each release they have progressed immensely whilst keeping to the true spirit of heavy hardcore. This album is a compilation of all of these amazing releases on one cd. Not only is this all their fantastic tracks on a cd, but it has been brilliantly been digitally remastered by Mario Cangemi from Upstate Records in New York. As a fan of this band who has heard these releases prior to this release, the remastering adds so much clarity and power to these tracks.

Of the three releases, RELENTLESS has the most defined edge, but that is like comparing the finer points of European sports cars. There is no filler here and you get a great sense of how the band is soaring above their rivals, whilst improving their craft with each very essential release.

I would categorize their music as heavy hardcore in the vein of Hoods, peak Madball, All Out War, and Earth Crisis. In other words, every track is worth your time. You can  pop the album on shuffle and enjoy the old tracks as much as the newer tracks.

Highlights were: Lionshare, Ready to Die, Hate Burns Red and Living Proof, but every track is a first-class fighting anthem. Don't waste any time thinking about this album, this is solid hardcore magic that you need in your collection.

Here's their excellent video for Lionshare: