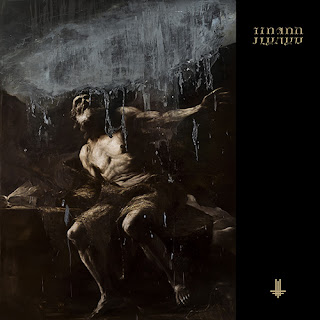 Behemoth-I Loved You at Your Darkest reviewed by Mark Jenkins.

Let's state the facts, these Polish metal gods have been a creative force since the early 90's and although they are far from their original black metal style; they have created numerous masterpieces and the progression has been a joy to observe. No sellout shit here; this writer believes Nergal and co; frankly don't give a fuck about your opinion and criticism. True metal craftsmen.

ILYAYD is Behemoth's 11th epic release. Did they aim to better the incredible "the Satanist"? or were they seeking to continue the virtues of this groundbreaking album?. I believe the later, because while the production and variation are astonishing; it seems to be slightly stagnant by the means of the depth of the previous release. Now for most bands that would be disappointing, but there is no mediocrity present here. This writer is a massive fan of this band and while I think it is a solid album; its impact was less than it's predecessor.

"Solve" is an excellent moody eerie, yet creepy intro which flowed fantastically into "Wolves ov Siberia"; which is pure black metal nastiness."God = Dog" is a melodramatic tune that twists and turns; and while it would kill on a big arena, this writer found the children's backing vocals to be distracting and very annoying. Luckily this is entirely redeemed by a superior stretch of this release with 6 songs that utterly keep my attention; plus some severely rewarding wtf moments.

Tracks 4- 10 are phenomenal Behemoth songs that will hold their value for years to come. All are excellent, but Bartzabel, If Crucifixion Wasn't Enough and Sabbath Mater (best track of the album by a mile) genuinely bring together all the wizardry of this fantastic band. "We Are The Next 1000 Years" also hits the nails in your cross with potent effect. This is where the album should have ended as I felt "Coagula" was a bloated ending to a tremendous album.

4/5 sacrifices for me, it is a beast of the album but this writer hopes next release is somewhat forging new paths for this world-class extreme metal force.

The heavens will fall on Oct 5th, 2018 when this is released hit up http://www.evprecordings.com.au/ for your copy asap.