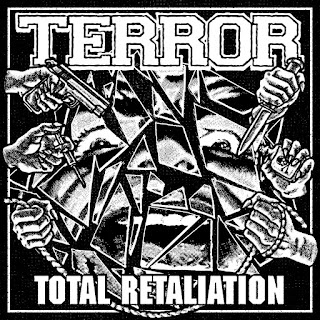 Terror-Total Retaliation Reviewed by Mark Jenkins.  This is Terror's 7th album in and this band remains still solid as fuck,  unlike many of their peers. Easily this is one of Terrors best albums period. If you cant produce the fucking goods as a band,  quit ffs.

The album opens with a surprisingly mid paced warning to all the doubters,  This world never wanted me not only rang true to me personally but its barbs, are so deep,  you know Terror ain't settling for an average release.  This then leads into an onslaught of true hardcore sounds that demand your attention. There is a beautiful abrasive flow throughout this album and while its hardcore as fuck in it's traditional roots, each 2 min track is diverse and original.

Amazing ripsnorters like Get off my back,  One more enemy and Break the lock ensure more stagedives in the foldback as Scott Vogel would shout. This leads into a sick rap interlude to break the pace, well only briefly.

This is literally to allow you to catch your breath before the stunning last four tracks. Spirit of sacrifice lights a massive fuse, with my album fave I dont know you: which ensures the bullet train end to the album with Behind the bars and brilliant closer,  Suffer the edge of the lies.

After 20 years,  it amazes me Terror can still crush it in 2018 given many of the their allies have released immensely laughable and embrassing albums worthy of immediate retirement: you know who the writer is referring to. Terror keeps it solid,  interesting and noteworthy.  This is a fkn sensational album, that is 5/5 without a doubt.

and buy the album pronto!!!