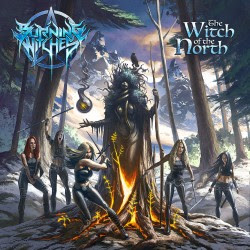 FFO: Classic metal like Judas Priest, Dio, Manowar etc. Solid vocals and raging riffs.
2021 I declared was a year I would vary up the reviews and initially I was not expecting much as this band's previous works did very little for me. But this album is classic metal and it definitely grows on you. On this release, they have a new vocalist and guitarist, and to be frank it's what the band needed. You get the awesome vocal skillset that is perfectly supported by great guitar work and purposeful songwriting. Where the album soars is in its fast-paced Judas Priest-like crackers that really grab your attention and are punchy as hell. Examples of this are the title track, The Circle of Five, Thrall, Nine Worlds, For Eternity, Dragon's Dream, and Hall Of The Mountain King. These are all exceptionally well-written, dynamic and remind you of all the classic bands that got you into metal. Each of these excellent tracks takes you on a glorious journey and the playing is exceptional and flawless. Where this album falls short for my ears is the overlong length of the album, and whilst it presents great value for the fan it definitely outstays its welcome at 61 minutes. But this could easily be prevented by culling the flat, slow-paced, and slightly uneven tone of tracks like Tainted Ritual, Flight of The Valkyries(way too much cheese on this), and Lady Of The Woods. These tracks seem not needed and this would trim the album down to a more palatable length. I wouldn't call them filler, but I felt they slowed the album down too much and also adjusted the atmosphere in comparison to the faster tracks. But overall, a very solid album with great vocals and amazing riff magic. The new vocalist and guitarist have added much depth to this well-established band and they certainly promise a solid future on both recorded and live fronts.
Out now via:
https://media.nuclearblast.de/shoplanding/2021/BurningWitches/the-witch-of-the-north.html
Get social:
https://www.facebook.com/burningwitches666
Watch this:
https://www.youtube.com/watch?v=-ij-ECgDdBg