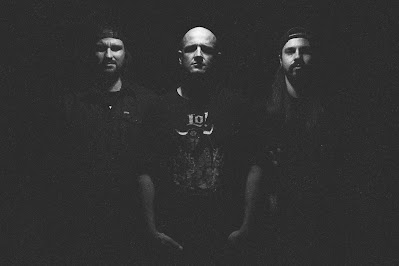 Australia's brutal groove masters Black Rheno return with a massive east coast tour throughout May & June to celebrate their new single entitled "Battle Ready". It'll have been just over a year since Black Rheno has brought their hell-raising sludge, grind, groove party to the stage. Having released their debut album "Noise Smasher" at the end of 2019. Then backing it up hitting stages across Japan, Australia & New Zealand with New Orleans sludge royalty EYEHATEGOD, the guys were just gearing up to start taking the rest of the world on when this pandemic hit and stopped them in their tracks.
Ryan Miller (vocals) tells us:

Yes, it was crazy; we'd just come home off the back of one of the most insane tours playing night after night with some of our biggest idols. From beginning to end, it was just intense. The shows in Japan were a fuse box of insanity and positive energy. It was our first trip to Japan, and every night the crowds just lost their shit, pits, riffs, beers, ramen, and tons of sweaty punters crawling over each other: fuck I wish that were now, it seems like such a distant dream at the moment. Australia was nuts too, and it was rad bringing our new album across the Aussie circuit. New Zealand was another mental time, there were only two shows there, but once again, it was just balls to the wall crazy; what a time it was! The plan after that was to bust around Australia for our own headline run of shows and then kick-off to Europe and take all of that on when bam, the pandemic hit, stopping it all dead. It really messed up our album touring, and since then, as everyone had to, we've just been doing what we can. We never really stop though, we've been working on new tunes, just banking up songs and ideas for the next album, which we'll spend this year shaping up. All we can think about is creating the biggest, fattest, meanest grooves possible and getting back out there to blast heads off. This tour and single release are all about that; as cheesy a name as it is, "Battle Ready" it’s all about moving on from the year that came before and life struggles in general. It’s about taking all the ups and downs, staring them in the eye, and reaffirming we're ready for anything, and never backing down. We wanted to write a song that just makes us want to bang our heads, groove as hard and we can, and party like motherfucking animals, no holds back. We just want to get out there, play shows, party fuckin hard, and just have a bloody good time with our mates!


Black Rheno just don't stop and go watch this excellent video to give you a taste of the new tunes coming from this heavy, sludgy unit and to look forward to their tour this month. This track seems to be a new era for the band with some added power and groove.
Watch this:
https://www.youtube.com/watch?v=G2YvrNUKFS4 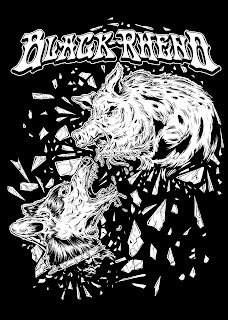 1-First off, kudos on creating so much sound for a band that doesn’t have a bassist, your guitar tone is wide and all-encompassing like your musical journey. You are quite the global citizen having been born in Spain and relocating to many locations. Fill us in on your musical journey and how you ended up in this fierce band.
Hey man, thanks for having me! Yeah, I’ve been lucky enough to move to a few different places since my early 20s. I was born in Spain and I played there in a bunch of local punk bands, throughout my early teens to my late teens when I starting playing more heavy stuff.

Then I realized that I should take advantage of my EU passport, so when I got the chance to move to Italy for a little while, off I went. Played over there with a bunch of local dudes and it was so much fun but challenging at the same time due to my lack of Italian at the time — limited to ‘birra’ and ‘pizza’. I then decided to take things a bit more seriously, and moved to London for a few years to really focus more on developing my taste and skills, and hopefully play some shows.

That’s when I met the Strauss dudes. Strauss was a sludgey/stonery band and we managed to play a bit all over Europe. Still nowadays, 7 years later, I consider them my brothers. I learned a lot from that band and had the best time jamming and touring with them. I also managed to record a couple of very cool EP’s during my time with them.

After that I got the opportunity to move to Sydney, and I was like…. WHY NOT? I didn’t know anything about the scene in Oz. I only knew King Parrot, as their ‘Shit on the Liver’ video blew up in the UK and I was like ‘If that’s what’s cooking in Australia, I need to be there". Little did I know that a few years later Youngy would be managing my band.

Since landing in Sydney, everything happened very organically. I went to jam at my local rehearsal studios a couple of weeks after arriving, and that’s where I met Ryan. Just like that we got together and started to make music. And then Black Rheno was playing shows up and down the coast 3 months later… and haven’t stopped until now!

2-The latest single Battle Ready seems to have shown a growth in the band’s sound since the debut album, it’s sludgy yet has the dynamics of more extreme music. The film clip is pretty funny as well. How did the song come about and is this a preview of the gems of the new album? Is a new album completed and how different will it be to the debut?

Battle Ready came together pretty organically to be honest. I had a couple of the riffs in my head as I had been writing a lot during the first lockdown (not much to do, right?), so when we finally got together and I started playing them, the song just came together very quickly.

We have a bunch of songs sitting there now, it might be enough for a future album but we don’t have a timeline in mind. I guess when it makes sense for us to put an album out, we’ll be ready to go! It’s kind of hard to know what to do in the current state of the industry, and with no international touring happening and all the covid restrictions changing so quickly… it’s a bit of a work in progress.

You can expect the usual Rheno recipe: LOTS of heavy groove (the type of groove that makes you pull that stinky face), with a splash (or three) of hecticness, a fair bit of blast beats. Super fun stuff.

3-Black Rheno has always had varied influences and also played with some sensational international bands, what makes this band unique? What are the long term goals/aims?

Something that people always comment on is our influences. We love anything fast, but also slow and groovy. It’s weird, but the beautiful thing about music is that you can do whatever you want, or at least that’s how we see it. If we come up with a stupid funky section on a very fast song, we look at each other and say ‘WHY NOT’?

Also, I guess the absence of a bass player in the band is also something people talk about after our shows. I’m the only guitarist, so we have to put a lot of thought into our live sound to make up for the lack of another guitarist or bass player.

4-Art and music intersect perfectly as artforms, how does this work for your band?

I’ve always been passionate about visuals in music. Even when I was a kid, I could listen to albums and stare at album cover for hours. For me, the visuals are almost as important as the music. I’ve gotten more into a fairly average album just because they had done something interesting on the album cover. It makes you hear the music differently. Visuals and music always go together for me.

It was this relationship between art and music that influenced me to become a graphic designer. I had all these ideas for the visuals for Black Rheno and didn’t like the idea of trying to articulate it to a designer. So I became a designer and now I am able to design the things I want to. I’ve been lucky enough to design a few of the Black Rheno posters or tees that we’ve got. Visual art in heavy or extreme music doesn’t have to be polished and doesn’t necessarily need what other bands do. It can be weird, it can unique, it can be simple and clean. 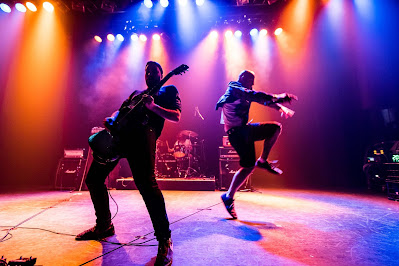 5- Live, how does your music translate? do you have a message on what rewards you as an established musician?

We try to sound the same live as we do in the studio. We don’t have a bass player in our shows, so it’s just me with an octave pedal going to a bass amp. That’s exactly the same as we do when we record. Same pedals, same amps most of the time, and same approach. No bass, just guitar. We might spend a bit more time finessing things in studio but overall we like to keep it quite organic. If the take is not 100% there but sounds rad or adds to the vibe, we keep it. If there’s something we cannot replicate live, we don’t do it on the recordings.

I think what rewards me the most is going on tour. It’s the climax after spending months and months doing a lot of groundwork (jamming, writing, finessing, recording…), and it’s just the cherry on top. I love it all, but just being on tour and jamming the new songs and seeing people enjoying them, that’s a really cool feeling. It makes me forget about everything else!

6- What are the highlights for you as a band so far and on the flip side, the struggles and challenges?

Just being on the road is a highlight for me. I love spending time away with the guys and really focusing on what we do, without any other distractions. Apart from that, touring with Anselmo, Napalm Death or Eyehategod have been some really good times, and very inspirational ones.

The not so fun times I guess come when you need to take 3 weeks off work to be able to play a tour, not knowing if you’ll get the green light from work or the cash to afford doing it all (or to eat). For a small band like us, this is a lot of pressure. But we always have managed to find a way, and will continue to do so.

7- Any favorite current artists or particular albums you have on rotation?

I’m lucky enough to be able to listen to music while working at my full-time job, so I’ve always got something playing on Spotify!

8-Any final messages or words of wisdom?

Be safe and hopefully see you on the road this May!!!


The tour kicks off in May and carries right through to mid-June, tickets are on sale now: