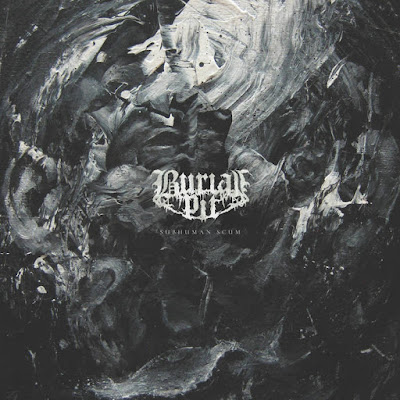 FFO: Heavy, brutal soul-crushing extreme death metal-influenced sludge.
When I saw the subgenre tag extreme sludge, I was damn skeptical, to say the least. But the tag is so damn accurate, I definitely like some sludge; but only when it pushes boundaries and makes my skull rattle and my soul dissolve. Burial Pit is brutal and masterful merchants of dissonant grief inflicting metal. Over the course of this perfect album, the jarring and harsh beauty that is Suburban Scum will overwhelm each listener and make each an immediate fan.
The six tracks are all solid, well written, and served best as a whole document. The influences are broad and mostly from extreme music; be it black or death metal, crust-punk, or grindcore. The harsh bass and guitar tone match an equally coarse vocal masterclass and there is no brightness in the sound at all, thankfully. Mother Tongue and Priest are the standout tracks for this listener, but as I suggested this is an album best enjoyed from start to finish. The refreshing thing is whilst this band grabs fantastic and clever ideas from many great genres, it is how they combine them in an intelligent and penetrating format. Whilst cavemanish in its sheer brutality and dark intent, it delivers a product that is both original and ingenious. You may feel like you need a long bath after the pure filth of this release, but you probably throw the album like five minutes later for another dose of destructive noise. Burial Pit is very clearly made up of creative wizards and the lyrics match the unharmonious music superbly.
This is exceptional extreme music and this band will produce many more great releases judged on this stellar debut.
Grab it now:
https://burialpit.bandcamp.com/album/subhuman-scum
Watch this:
https://www.youtube.com/watch?v=oo1fcmYoBdg
Get antisocial:
https://www.facebook.com/burialpit/