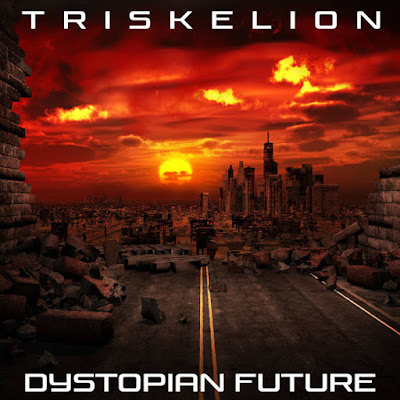 FFO: Nasty, clever electro-industrial music that is heavy and addictive.
Hailing from Melbourne, Triskelion is a brilliant one-man mega project that promises so much and exceeds all expectations. Dismiss this at your peril, because it's a deep and intelligent take on a genre that is often repetitive and uninspiring. James is a guitarist that previously has played in hardcore and metal bands (the guy has many side projects of varied genres as well as current bands he plays in) but the sheer talent in this particular project is astonishing. It has many influences be it the gothic electro or harder industrial elements, it just works perfectly. I hear definite Front Line Assembly influence as well as some early Fear Factory as indicated by the clever mashing of abrasive guitar work with pummeling drum patterns and gloomy keyboard action. But then you get some underground techno vibes like Psyharmonics that are absolute dancefloor crackers. It doesn't sound like it works, but it is so sublime. The dynamic vibe is like an underground rave crossed with goths playing keyboards whilst skilled metalhead riffs away like in an insane Gabba compilation. But it's not done in a cheesy way at all, the song structure is well thought out combined with perfect audio production. For the most part, there is a heap of catchy tunes that are decently balanced out by the more gloomy tracks. Like the title indicates, it's a chilling and energetic soundtrack for the crazed state of the world.
Fave Tracks: The title track; it just hooks you in with a false sense of calm and then grabs you by the throat straight to the dancefloor, Machines with its menacing tone and industrial sedative nature and For My Sins which is dark as fuck, but almost has a Depeche Mode catchiness to it. Also, the Hand of Fear cover is incredible, it gives Ministry and NIN a run for their money; it's epic and crushing.
The great news is the second album is due out in the next few months, so the psychotic soundtrack to your life continues!!!.
Listen and buy here:
https://triskelion-industrial.bandcamp.com/