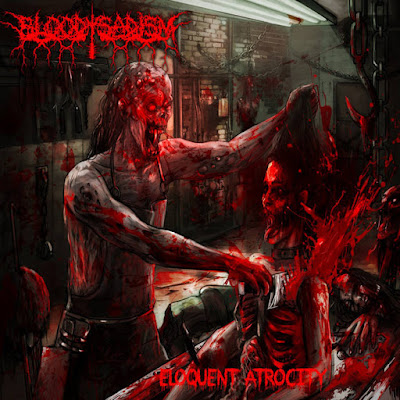 FFO: Goregrind, slam/brutal death metal.
Bloody Sadism is an incredible one-man project from Tehran, Iran; namely Pooyan Ahmadi. It's impressive, brutal as fuck and some tracks definitely have that Cannibal Corpse swagger. And the music is as hectic as the front album art; which is total gory glory. The ten tracks annihilate you and wash you in an utter mix of blood and rancid flesh. Nothing is too serious here, it's flat-out fast-paced gore inspired extreme metal. Highlights are the vocals, even though I personally get sick of pig squeals very quickly, but if that is your bag; you will be in heaven. Musically riffs are abrasive, have a groove to them and the samples on this release add to the overall mayhem. My fave tracks were: Ravenous Whore with its pace and devastating tone and Bipolar Disorder which is indicative of the song title. I am sure the lyrics are horrendous, but that's the genre and what is expected. Check it out if Gore inspired extreme metal is one of your faves. He does an epic job of it.
Antisocial:
https://www.facebook.com/bloodysadism/
Grab the gore here:
https://bloodysadism.bandcamp.com/releases
Here's an interview we did:

Could you give me a brief history of your (one man) band, its name and what releases you have? And more so, how do you create such gritty and grimy brutal death metal by yourself, it's hectic and damn accomplished for a first release?

I started the band in 2014 with composing some riffs and it took 4 years to finish the songs and make them ready to be recorded. I began to study more and increase my own knowledge to do something specific. In 2018 I started recording and in 2019 I signed with Base Records Production label from Spain.

Anyway, I tried to do my best and create my own music.

Nasty, Full of hate and pain. Something really negative.

What drew you to metal and what is it such a rewarding and sustaining genre of music to you?

I always wanted to do something new… you know, singing about love and these themes have been mentioned million times. I think the world needs more than that. So I chose to play harsh music like that. I really admire Death Metal. Generally, pure and true music.

Devil's Horns firmly believes that music and art is the best crossover in the universe, how does that work for you as a band? I mean you obviously dig brutal gore given you album art

Technically I play music to say my own opinion about various issues without any kind of sensor. Music is the only thing that I'm completely myself and I don't need or force to pretend about something.  Totally it's my pure feeling about subjects and I feel alive. I don't like to lie at all and this music is my best place to empty my mind. You know, there are good things and bad things in the world and these basics meanings make the world meaningful. In fact, I believe in that if there are no bad things in the world so there won't be anything good at all. Darkness and bright… There should be differences in the world to find the meanings of things. In this situation, I like to be the lord of dark things 'cause it's been mentioned less that the other positive things. Yes I think darkness can be something positive too… if you understand how to use it, how to deal with it and so one…

Live how does you music translate? Do you have a message or what rewards you? Have you played live in your country?

Collectively, it mentions a sick mind's system and its idea, opinion about other things such as feminism, sodomy, drugs and originally negative things through horror stories. I want to say that: Hey people!  I won't follow your stupid ways and dump patterns. I have my own way.

Bloody Sadism didn't play in Iran and Won't. Just abroad. This music is so damn high-quality for Iran and I won't burn it down. 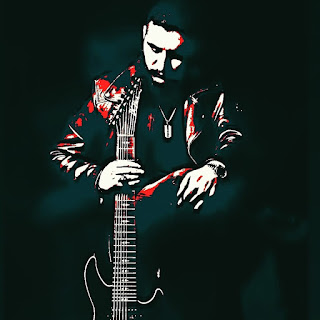 Any upcoming releases you would like to tell us about?

I've composed some songs and the second album will be recorded soon but I can't tell you the exact date and details.

What are the highlights for you as an artist so far?

I really admire pure feelings in every kind of genre.

On the flipside, the struggles and challenges?

Money, good equipment, embargo and so on are the important things for me as challenges.

Money is the most important topic for me. You got money, you got everything.

Any favorite current artists or particular albums you have on rotation?

At this moment because of my deep depression, stress and etc, I don't have any new favorite artist. 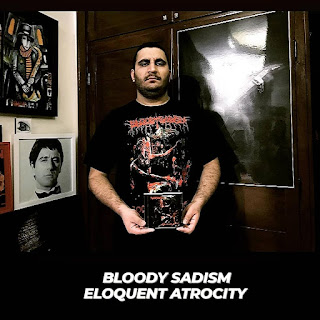 What are the future plans for you?

Thanks to the fans from around the world for their supports. Next album will surprise you, definitely.

Thanks to your magazine… wish you the best