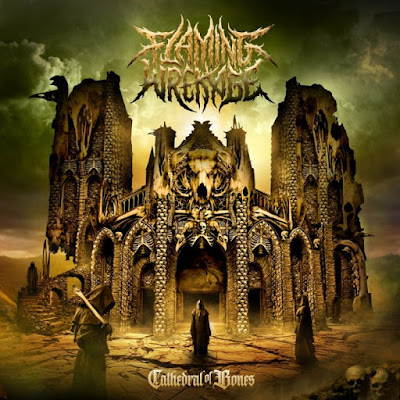 FFO: Heavy as fuck Modern thrash with crushing melodic death metal elements.
Album number three has arrived and it's a fast, nasty cracker of a release.
Straight for the Kill is a killer track on this album and sums up this nuclear weapon of a release. The beauty of this album is there is sufficient tempo change, guitar wizardry and vocal rollercoaster shit to bedazzle any metal fan. There are moments of classic American style thrash metal and also tracks that shit comfortably between melodic death metal and metalcore. But not the generic stuff and that's the difference here. Tracks like Leech draw you in with amazing and sharp riffs but balance it out with a killer groove. Altar of Lies drips in dark, echoing grim glory and The Voiceless (def. the highlight of the album) attacks you on so many fronts-sensational vocal and guitar warfare blended with resounding bass/drum magnificence. Plus that oh so tasty chorus....love it and nearly snapped my neck to this rager!. I definitely believe this band has shown greater depth on this album and they have reached their individual sound here. And that's what we love about Aussie metal-it's unique, bands work harder to get to their own sound and there is the grit that no other nation seems to have. Overall a fantastic album of variety and tons of epic songs that are produced well and a dazzling dynamic that my ears loved.
Highlights: The Voiceless, Opener Skeleton of Giants, Leech, Hell to Pay and Straight for the Kill; but it varies day to day as the album is completely solid from start to end.
Grab it here:
https://www.flamingwrekage.com/
Watch this:
https://www.youtube.com/watch?v=jmRFJ6QpYDQ
Get anti-social:
https://www.facebook.com/flamingwrekage