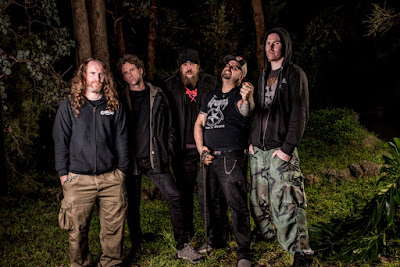 Anyone that is worth their extreme musical merit knows that Abramelin's new album Never Enough Snuff is without a doubt one of the albums of the year. We reviewed it last week and it's fair to say it just gets better with each listen. This writer actually challenges anyone to pick out any faults with this release. Flawless extreme metal perfection. Go on, I dare you to find anything wrong with this album.
Threats and facts aside, we were stoked to chat with these metal warlords about this album and their return to the live and recording front. As expected these guys were extremely down to earth, full of both humor and wisdom. I have to say I appreciate when bands take the time and effort to answer questions we poke at them in our interviews; too many bands give you the stereotypical bullshit lame answers that no one really gives two shits about. Not this band, respect to these blokes!!!. Like most extreme music fans, I am absolutely hanging to catch these guys performing this masterpiece live and I encourage you to give this album a decent listen and you will soon be ranting it's deep merits to every fucker you see. It's that amazing and frankly puts most overseas acts to shame. Here's our chat, enjoy!!!.

What an absolute fucking ripper of an album, give us the background i.e. why you took so long to sit on your arses before blessing us with this dirty, unforgiving death metal masterpiece?

Thanks for your kind words. Well we did have a break for a lazy 14 years, so there was that. Once we were back in action it was a matter of touching base with the old guard and introducing ourselves to those who didn’t have the opportunity to catch us live pre-2003 or just hadn’t heard of us. Along the way we began introducing new material starting with Never Enough Snuff, then Full Gore Whore and a few of the others from the new album. Then once we had amassed enough material, we went into the studio in 2018 and started the process of laying everything down piece by piece while looking for the right engineer to pull it all together.

Why do you think Never Enough Snuff has been so well received, is it because of the sheer heaviness of it ( and it’s fair to say you have an excellent back catalogue) or because that all the competition is pretty piss-weak, besides Werewolves who also dropped a brutal album with the beast that is Dave Haley like you? Seriously why can’t you do a Gold 104 FM type album, this is one brutally crushing album on every level-the riffs, the war like tone and the insane vocals….Kudos on this release!!!

Speaking as a fan of this band since I was a teenager, I think the albums been so well received because when Abramelin were active around the time of the self-titled album, there was a real high point in death metal, particularly American death metal. For me, and I'm pretty sure I can speak for Dave as a fan back then as well, back in that time Abramelin were on par with a lot of the big names of the 90's. There was a hype around Abramelin that was totally justified given the strength of the band back then.

There were a lot of rabid fans and I don't think that level of passion just disappears with time, people don't fucking stop liking heavy metal.

When the band reformed and played that 1st show back in 2017 I think it caught people by surprise and a lot of people were "fuckin hell, are they gonna do a new album" Obviously we were aiming to make a fucking savage album. It had to be more out of order than the earlier material. Everyone I’ve spoken to about it seems to be really into it!

The band has had many line-up changes over the passage of time, but it didn’t seem to weaken your killer live performance (best on ground by a mile) at last year’s Direct Underground fest in Melbourne, I assume it’s safe to say you are chomping at the bit to play this album live as the restrictions are lifting?

Cheers, the line-ups great in the band, everyone acts like a fuckwit and the laughs never stop at rehearsal or on the road, Me and Tim have probably the best "2 guitar" interaction that I’ve been involved in over the years, and Dave's a monster on the kit so the band as a whole destroys. We're totally up for touring the album, it’s been a real kick in the teeth that this whole lockdown thing happened just as the album was about to be released, Its fucked things up a bit on the production side as we weren't really sure as to how sales would go with the initial release with no launch shows to back things up. Thus, not pressing vinyl as of yet. Hopefully, all this shit comes to an end at some point in the not too distant future and we can get back on stage.

Given the bands’ early beginnings as Acheron, how does it feel along with Christbait to be one of the pioneers of Australian extreme music?

It is what it is, in so far as us being one of the only surviving pioneers of the initial wave, but that being said, there is definitely something there that makes me feel like a proud dad (which I get, cause I am one). The Acheron days feels like a lifetime ago, when I look back at photos and ye olde YouTube videos, it seems quite surreal (especially looking at myself with no tatts and a huge amount of hair! Reflecting back on the scene, especially in the 90’s, brings back some great memories though; so may great local shows, international supports, and an endless array of amazing people!

What makes metal such a sustaining genre for you? what got you into metal? Bore us with the details we love a great metal history tale?

For me it’s the energy, extremity and aggression, it isn't meant to be clever, its meant to be horrible, nasty loud and offensive. Not just limiting the offensiveness to the lyrical content, but the whole package. Offensive in the way that when you're a teenager listening to music, your parents should hate it. People that aren't your friends don't like it and don't understand it. When I first heard metal music it was a magic moment and that was it, from there it just got heavier and faster, I’m sure most people that are into extreme metal have the same story. It ain't anything special, its just the way certain people are wired, I’ll say it again, people that listen to black and death metal don't stop listening to it. Maybe people stray from the path a bit over the years, but anyone that likes Deicide doesn't one day say "Nah I don' like death metal" If you're passionate about metal, it's there to stay.

In this age of Safe spaces and politically correct nonsense etc, is it pleasing to be an original extreme metal band with old school lyrics that indeed celebrate the filth of this world? The lyrics are not just funny as hell, but really clever as hell.

Thanks man. I spend a lot of time putting my lyrics together and thoroughly enjoy the process. As well as having a brain that is finely tuned to all-things-nasty, I have amassed an enormous number of idea-generators from watching a lifetime of horror films and reading graphic horror almost exclusively. I also do my best to sing in a way that is as deep as I can get without sacrificing an understanding of what I am saying. I want people to hear the grotesque words and narrative I am spitting out and they usually can once they get a feel for my voice. I quite often will compare listening to what I am saying as to listening to someone with a thick accent, mine’s just a deathly tone from parts unknown.

Is this album a pitstop or a continuing journey given how successful this album was been received, personally I think it’s not only an album of the year contender, but one of the best Australian metal albums period. Both the media and the fans are hoping that you fuckers hang around, play tons and release more albums.

To be honest, we were expecting a positive response from our old school fans but nothing like what has transpired thus far. As you suggested, people have lost their shit and I have heard from many, many people saying that it is their ‘album of the year’. We are all blown away and feeling very humbled by the entire experience thus far.

As for what the future holds, we are focused on getting around the country as soon as possible and bringing our deathly offering to the metal masses. Even with that we have to take things one day at a time as this whole pandemic bullshit has seriously thrown a spanner in the works… as it has for everyone!

What makes aussie metal so different but often better than its overseas competition?

Well, that’s a subjective view depending on where you are from but I do think that we have something very special going on in Australia and always have. Although a lot of the international metal scenes may harbour artists that are seen as the trend-setters, I think that we are far enough away from the action and influence to take the best parts of those sounds and work them into our own unique approach that does stand apart from what’s happening on the rest of the planet.

What are some of the band’s highlights and struggles over your career?

· Producing the Acheron / Abramelin releases that we have over time

· Having such an incredibly dedicated army of fans, many of who are some of the nicest people that you could hope to meet

Line-up issues over the years

Living in Australia. Don’t take that wrong way, I am a VERY proud Australian and wouldn’t wanna live anywhere else, I just mean from a geographical POV in getting our music to the international community without relocation o/s or touring like a motherfucker (like our Drummer Dave does with Psycroptic)

Any parting wisdom or message for the fans out there?

Come to local shows and support Aussie metal. Anyone can be a bedroom metal warrior and listen to the internationals bands but being a true metal-head starts an ends with your support of the local scene. Usually for the price of a pint or two, you can see some incredible local talent that will stand up against a lot of what the international community has to offer. It might not always be a finely polished as some of the international brethren who have solid label deals and the financial support that goes with it, but it will have its own unique approach, be regularly accessible and you’ll feel all warm and fuzzy that you are supporting the local economy and live art scene. It’s a win/win for all!
Thanks for your time!!!