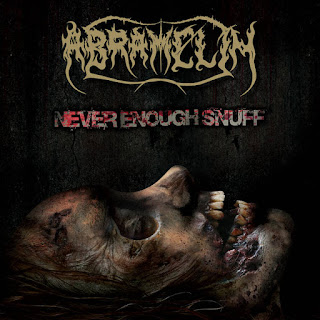 Unrestrained, crushing no fucking nonsense old school death metal. Never enough snuff is a definite contender for metal album of the year on most critics lists. And this is the band's first album in 20 years and as seen at last year's Direct Underground Fest in Melbourne, they held the crowd in their hand and were the most talked about band of the night, no not the international's but Melbourne's own Abramelin.

FFO Cannibal Corpse, Deicide, Obituary, Entombed, Napalm Death, but the peak eras of all these bands. This band's beginnings were the fantastic Acheron, a band that started an interest in this genre for many individuals, myself included. To me, this band and the mighty Christbait changed the musical landscape forever in Australia and both are bands I still absolutely worship. How rare is that?.

This album is an old school death metal album with modern and abrasive production that scintillates your heavy music tuned ears. Lyrics are nasty as fuck and total filth fest in the way that death metal should be. Guitars are aggressive, riff-heavy, and frankly some of the best metal vocals in Australia. Flawless and essential, get off your arse and buy the album, it's brutality with a capital B!!.

Fave tracks: The title track, Knife Play, and the classic The Peeler.