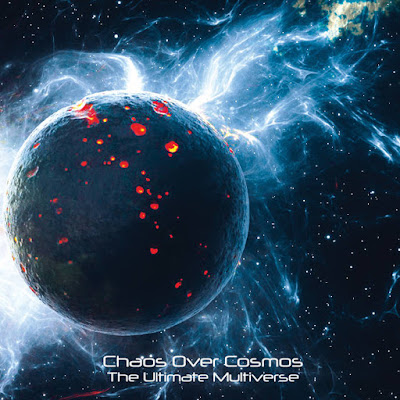 Moody, heavy and epic. Chaos over Cosmos is definitely not my usual type of band I choose to listen to, because I generally don't dig much metalcore, technical or prog. type of music. But it was damn surprisingly enjoyable. The guitar playing was outstanding, song structure intelligent as fuck, and a perfect mix of old and new metal. Indeed there were some cheesy keyboards and some clean vocals, but it was constructed in such a way that you not only have to give this notable credit for the artistry but as an album it rocks hard. Heavy and catchy in all the right places. Never boring and for a project between two nations-Australia and Poland, it's damn decent.

Bio:
Chaos Over Cosmos is a progressive metal online collaborative project originally created by Rafal Bowman and Javier Calderón in the year of 2017. Two musicians who had never met each other and decided that being countries apart couldn’t stop them from making music together.
Since the release of the debut album ‘The Unknown Voyage’ in September 2018 and its re-release with 2 new tracks in April 2019, Javier decided to leave Chaos Over Cosmos. Rafal asked Australian vocalist, Joshua Ratcliff, to join Chaos Over Cosmos, after hearing Joshua on his bands, Resurgence.
"The Ultimate Multiverse" is the second full-length album of the band, a continuation of the exploration of progressive music and science-fiction themes with a modern and technical approach. The album will be released on 20th June 2020 by Narcoleptica Productions.

Stylewise it sits between the borders of modern metalcore and progressive metal, with some melodic death metal and deathcore influence. It's clever, intelligent, and damn catchy music. There are occasional nods to '80s/90's electro-rock stuff and that's okay with my ears. The nasty nature of the riffs balances out any too relaxing moments. The thing about this band is it is producing original and crafty heavy music with a twist. Please give this independent band your ears and if you dig it, support them.