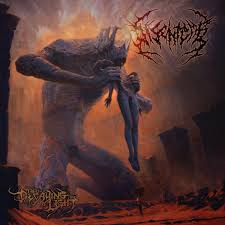 This absolute killing brutal death metal force is now in their tenth year and shows no signs of slowing down with their third album The Decaying Light. It has been five years since their flawless album Misery. Prepare for your face to be caved in by this release.

This album is certainly darker than their previous releases and whilst no sense of calm exists even remotely on this release, the album production-wise just doesn’t hit the gradient to which it should be at. The album is not flat, but just needs more punch to match the overall upscaling of aggression on this release. But I simply solved this problem by just amplifying the album be it a severe turn of the volume knob or applying an audiophile equalizer. And this album demands to be pumped loud regardless.

As per the previous release, the guitar-work is first class and whilst not flooring you with originality-it smothers you with it’s technical execution. Bass and drums are on point and match the gripping tone of this release, but the vocals are the main point of difference here. Jordan is just a complete beast of a vocalist with quite simply the skills of a festival headliner. His guttural finesse(whoever thought this was possible) is unbeatable; it is like a horror movie that catches your attention and makes you forget all the previous similar genred greats because the skillset is ranked supreme. That really sells the album for this writer, the vocal delivery is incredible and this well-crafted combination with ¾ of the songs on this album makes it a memorable album. I don’t think; besides the vocals that they have ventured too far outside of their dissonant brutality, but that’s actually more than okay. Remember this is a band that has only existed for 10 years and have toured the world many times over because they are in the upper echelon of bands. So quite simply whilst the album could have skipped at least 2 songs to make it more compact and concise, it is of world-class standard equally matched by the band’s insanely hectic live shows.

Disentomb is a stunning act on all fronts.

And now read our great interview with Jake.

1-Tell me how it feels to drop the face-melting album that is “The Decaying Light?

It feels awesome to finally get this one out there. It's been written for ages so the anticipation had a lot of time to build. Luckily we were all confident in what was written and recorded so we didn't sweat it too much.

Personally, my older brother always listened to metal as we were growing up so I was always listening to it from a young age. I was about 13/14 when I started heavily getting into death metal. It was the intensity and technicality of the songs that drew me towards that particular genre. Even though it's a fairly niche genre, there were always new bands to find and blow my mind.

3- Devil’s Horns firmly believes that music and art is the best crossover in the universe, how does that work for you as a band? You guys always have exceptionally hectic artwork on each release.

The visual aspect of an album certainly shouldn't be overlooked. We've always taken a lot of pride in the way Disentomb is received aesthetically. Nick Keller, the artist who worked on our two latest albums have done an amazing job of capturing the direction of the band in a visual format. I think artwork will always be a big part of our releases.

4- Live how does your music translate? what topics underpin your songs? And what rewards you as a peak death metal band?

When we approach songwriting, we always want the end product on the album to sound like it will when play it live. Keeping the production on the albums fairly raw lets the songs reflect the feeling of when we play on stage. That's something I've always appreciated in some of my favorite bands. 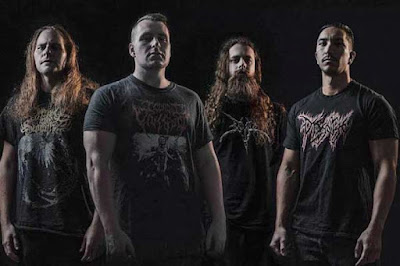 We're currently completing an Australia/New Zealand tour with Whoretopsy that has been amazing so far. Then we're off to the states in September to headline the Bloodletting North America tour 2019. We have some other sick tours on the horizon that we're looking forward to announcing as well so stay tuned, folks.

I think just getting to travel the world, doing what I love with my best mates. Not a lot of people have the privilege of getting to do that in their lifetime so I definitely don't take it for granted

7- On the flip side, the struggles and challenges?

Money is always a struggle but when isn't it? So I'd have to say having to sleep upright in vans would be the biggest downside for me.

I've been listening to the latest album By Continuum, who we're touring with in the states later this year. I'm really looking forward to seeing them live.

Do what you love doing NOW! You can't have any fun when you're dead.