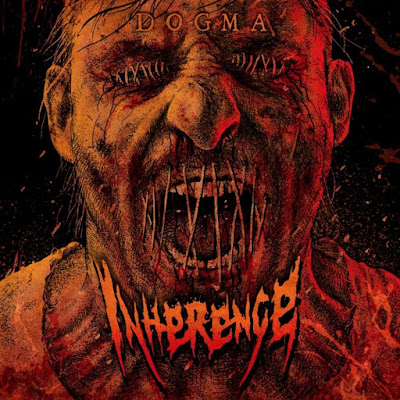 Inherence are a new band from Sao Paolo, Brazil & "Dogma" is their brutal debut full length release containing 10 crushing tracks combining Death Metal styled brutality with the groove & aggression of Hardcore. So if you like razor sharp riffs, heaps of blasting double kicks & some violent vocals you are sure to dig this album!. I was lucky enough to hear this pre-release and it’s damn impressive.

In their own words, here’s what Inherence describe their name and purpose:
"The name of the band states the relation between music and the urge for change in personal, social and political aspects, that are factors considered to be inherent to us. We make music because we deliver a constructive message to the people."

So Dogma is a crazed death metal inspired hardcore record that holds strong throughout it’s ten solid tracks. The band is so far away from knuckle dragging basic metallic hardcore. Each track had surprising melody and almost Pantera meets Decapitated style guitar work.

Vocals were brutal but with enough variety to hold any metal or hardcore heads interest. Very extreme in nature and groove based heaviness but probably could have been a shorter album tbh. If I had to rate it I’d give a solid 4 out of 5 World Cups, but that said some tracks sound quite similar. But I’ve listened to like x8 times and never had any impulse to skip any tracks.

Best tracks: Cursed by Fate, Slavery Design and Empire of Decay.
Hit up http://www.1054records.com for this killer album.
https://www.youtube.com/watch?v=Duce1YA3BsY for some audio violence.