Swamps, Slugs and a Clydesdale at Lake Pontchartrain?: A Motherslug Album Review By M H Thomson 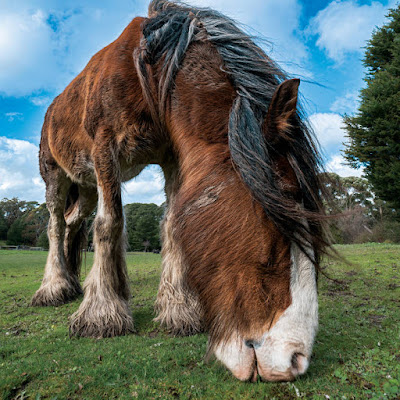 Swamps, Slugs and a Clydesdale at Lake Pontchartrain?: A Motherslug Album Review By M H Thomson

Let me set the scene real quick: An early 70’s V8 muscle car, you’re driving down an unpaved back road, somewhere in the Louisiana swamps, trying to find your entry onto the Causeway down to New Orleans. You’re in no real rush, it’s a nice day to take your time and crank some quality tunes, crack a tinnie behind the wheel, why don’t ya, the cops don't patrol these roads. Just casually cruise past the dilapidated former cotton plantations, occasionally having to lazily swerve onto the empty wrong side of the road to avoid low-lying willow branches. That's where this album transported me to, even the record's title “Blood Moon Blues” fits the bill, it sounds like the destination, it being a welcoming but grimy shithole saloon on the arse end of Bourbon Street. Buckle up y’all, with this one, the Sludge is palpable.

As ever, the cover is always the first thing you notice, even if only as a small image on Spotify. Perhaps I missed the memo here but the Clydesdale Horse standing in a field that solely occupies the front cover, to me, proves a strange and seemingly irrelevant choice; considering the breed is Scottish but Motherslug is an Australian group playing a predominately American-dominated subgenre of Metal. Although quite despite this perplexing choice, it fucking works, the image of this horse somehow makes all the sense in the world as the cover for this record and I love it.

Motherslug is a band I am actually reasonably familiar with, having played alongside them a small handful of times on Melbourne metal festival lineups with my own Sludge Metal band Infected Transistor. I, therefore, thought I had a decent grasp of what I was getting into with this record, but I wasn't ready for this, as this level of Stoner/Doom Metal wizardry has set the bar at a new high.

So now if we, metaphorically speaking, take this new album to be a brewery opening and the tracks to be the beers, the following are my tasting notes of the beverages on offer:

1. Misery: This song serves as the intro to the record. Its progressive acoustic stylings sound to me like a mixture of Led Zeppelin’s “The Battle of Evermore” and a Seasick Steve ballad combined. A combination that works surprisingly well. And it was a surprise. I was expecting the woolly fuzz assault of a bass guitar that’s had 50 Big Muff variants jammed into its signal chain, so to get a light acoustic piece instead was refreshing. The title is an apt one as misery is indeed overwhelmingly the sense you get from this piece.
2. Hordes: There’s the overly saturated distortion I was expecting. So punishing is the tone you can easily hear the clipping in places. This track is the first “main” song on the album and it sets us off on the right foot with a steady plodding pace not dissimilar to that of Sleep or Bongzilla. Guitarist Regan Batley’s Wah heavy blues solo reminds me a lot of the musical sensibilities of Mammon’s Thrones Amesh Perera’s style. A great if unintentional muse, and a feel that functions well in the context of this track. Vocalist Cameron Crichton controls his dry vocal fry perfectly throughout the piece, allowing him to hit some amazing soaring high notes in the chorus.
3. Breathe: Crichton really gunning for those raspy blues rock qualities in this one. It comes off as a mix of Pantera’s Rex Brown and Alabama Thunderpussy’s (ATP) Johnny Throckmorton. The swinging beat and brighter fuzz guitar tone, gives a very 90’s Joshua Tree Desert Rock scene vibe. This is felt particularly hard in the sound and style of Batley's guitar solo. The main riff, a real driving groove oozing from the thick low guitar tone that feels like that old American V8 engine stuck on the redline in 1st gear, slow in tempo with a throaty burbling rumble providing the auditory illusion of pace.
4. The Ballad of Jock Brown: A slow blueser, the lack of distortion is a novel change from the previous two tracks. A wobbling spacey delay hums in the background, sounding like a Lesley speaker that's been given the Link Wray “Rumble” treatment. The warm lazy traipsing riff rolls along until just shy of the three-minute mark. At which point the metaphorical aforementioned muscle car crashes into a swamp side telegraph pole and throws you straight into the sludgy southern dirt. The song picks up a bit, trudging along with all the swing of an early aughts ATP song for the remainder. The outro is rather reminiscent of “Misery”, a nice touch, reiterating the band’s calmer side after a long stretch of brutality. 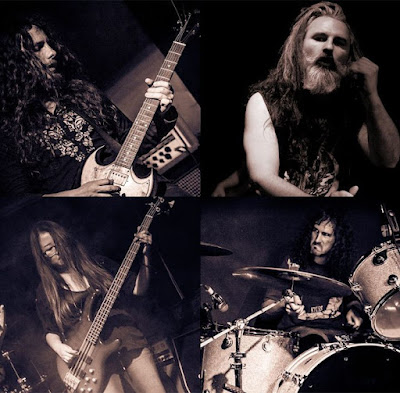 5. Evil: This song's intro is another bluesy groove that sprauchles along with ease, Batley bending into feedback at the tail of the riff providing a nice trebly counterbalance to the riff’s low-end heavy crux. This counterpoint is quickly replaced by the vocals. The lyrics describe the cliched virtues of evil, including drinking the blood of virgins, and Crichton calling himself “some kind of monster” even going as far as to sing said line (and a few besides) in a manner very reminiscent of James Hetfield's vocal idiolect. The feedback makes a comeback during the tunes laid back mid-song bridge, swirling around the tom drum-driven backbone. This is accompanied by a seemingly improvised guitar solo which sounds like Down trying to cover an Allman Brothers track. This section meanders on for a minute or two before segueing back into the verse coda. Feels like they knew the end destination but were making up the route there as they went along, a cool way to end the track.
6. Crank: As with every great album, there’s always that one mid-record track that's just kinda there but doesn't really grab you or explore any new territory musically. Great guitar soloing though, Batley really shines in this track, most impressively in the intro where he seems to be doing his best Jimmy Page impression. Beyond the intro however, the song is a rather generic slog about not giving a fuck, how original. Still a good song, just not a very interesting one, thankfully it errs on the shorter side.
7. Monolith: The track opens with a slow descending riff that runs into another classic duo of lumbering doomy verse and chorus riffs. The bridge sounds like a cross between the guitar breaks during the drum solo section to Ram Jam’s “Black Betty” and the intro to “War Pigs” by Black Sabbath combined to make for one hell of a build-up into the next much faster section. A spoken word speech accompanies this faster section, describing the battle the lyrics have been alluding to all track long. The feel of this speech conjures images of an American wartime public service documentary you’d find on the Prelinger Archives. From there the band drops back down into the chorus to triumphantly conclude the track.
8. Forever More: Continuing the themes of spoken word verses and Black Sabbath stylings, this song starts off very similarly to Sabbath’s title track, with wind, rain, and a slowly tolling bell, with more general Sabbath vibes peppered throughout the rest of the track. The steady churning main riff however puts me more in mind of a tune by fellow Melbournian Stoner Metallers Bongcleaner, one I can't quite place. A cacophony of noise, feedback and cymbals duly serve up one hell of an outro. Unfortunately at this point in the record, this song's similarity to others on the album coupled with its considerable length make it a fatiguing drag to listen to. Which is rather a shame, cuz as a stand-alone track, it's quite a solid song with loads of swing and ominous atmosphere hitting big in all the right spots, but its placement in the tracklisting ultimately lets it down. 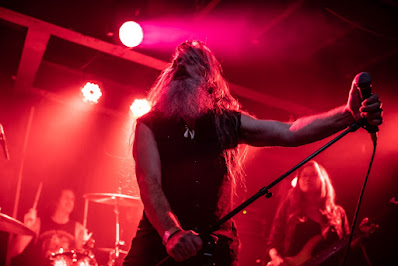 9. Push the Venom: Short , sweet and to the fucking point. This track provides a real breath of fresh air and much-needed change of pace. Beautifully showcasing the punkier side of the Sludge/Doom/Stoner Metal genre (an element that's always been present since the genre's inception). This consistently fast number relentlessly ploughs onwards without ever letting up, its aggression perfectly matching the sentiment of the chorus main line “Feels like a spike right through my head!”
10. Deep in the Hole: Kicking off with a very Southern groove that runs throughout, a Wah-laden guitar solo and the usual raspy vocals this track has all the hallmarks Motherslug is known for. However, sadly this track is yet another that fails to really stand out during a full album listen. An affliction that affects many records in this genre.
11. You (a love song): A lonely guitar gets things started with gloomy tranquillity. This very relaxed spacey feel hangs on for just long enough such that when the distorted fuzz-driven monster comes trudging in it really feels like the eye of the storm has passed and you're back in the melee. Another fleeting moment of peace arrives with the first verse before making way for the heavier brooding uproar to return. A piercing blues guitar solo slices through the monsoon of slow bassy brutality. The vocals take a back seat here, sitting lower in the mix, blending into the maelstrom of instruments, rather than sitting on top of them, thus adding another texture to the instrumentation. This tune more than any other on the record really feels like the doldrums, in the best way possible. The menacing doom groove contrasts the calmer blues guitar passages in a harmonious and copacetic manner.
12. Misery (slight return): Commencing right where the first track seems to have left off with a laid-back yet despondent-sounding Mississippi Blues cadence. Crichton takes the role of storyteller describing the actions that led to a mass poisoning event in an unnamed small town. Batleys beautiful and emotive slide and legato work are bestrewn across the piece. An excellent way of evoking the sentiment of a funeral dirge without resorting to tired monotonous organ tropes. A peaceful and fitting closer as it comes full circle referencing the opening number. 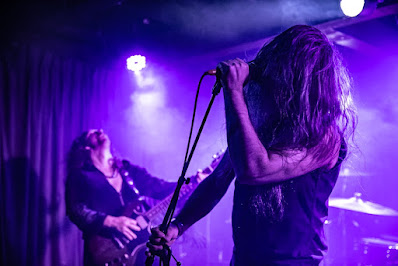 Though yet to be mentioned by name, credit where it's due, huge props must be given to Motherslug’s engine room, their rhythm section consisting of Bassist Cynthia Bae and Drummer Nick Radcliffe. The duo lay down a consistently solid foundation from which all the band's musical weight is drawn. Bae’s floccose low end providing the tonal centre for all the guitar work to build upon, whilst also offering a menacing melodic counterpoint at times. Radcliffe’s Dale Crover-esque flourishes and fills populating the record with colour and the odd point of interest amongst repetitions. Both are integral to the power, momentum and intrigue of the group's uncompromising sound.

Despite a few ever so slightly superfluous moments, overall this is an outstanding record. And if you were driving down the road, paying attention to the traffic, or sitting at home having a beer with your mates with this album on in the background, the record’s slightly more redundant numbers would blow right by you without notice. Leaving just the wondrous ear-catching moments of brilliance to shine through and grab your attention. For the most part, Motherslug displays great diversity throughout this album. Their ability to mix brutal heaviness with the odd instance of progressiveness and/or soulfully uplifting blues is a true testament to their genius. I can do nothing but highly recommend you all give “Blood Moon Blues” a listen. Trust me on this, you won’t regret it.
Out now:
https://motherslug.bandcamp.com/album/blood-moon-blues