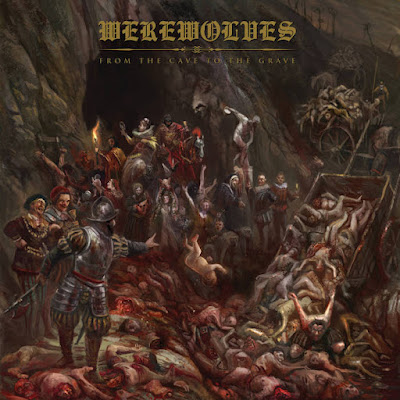 Werewolves-From the Cave to the Grave album. FFO: Brutal Death Metal ugly. This is one brutal and ugly album. No subtle moments, only occasional diversions to fuck with your head.

I mean even their media bio proclaims they have zero interest in changing style or degree of caveman-type aggression. And I am cool with that, because this is more of the same on album number three.
Here's my summary of the nuclear beast of a release.
The very first track Self-Help Book Burning has a weird epic sample to confuse you then it's straight-up brutality and a slowed-down pace towards the end. These metal legends are sneaky fucks whose aims are to insult you, crush you with the nasty shit and occasionally confuse you on the path of some tracks.
The second track We Are Better than You is 100% meatheadish ignorant crushing dumb death metal glory and will be a live fave. Werewolves continue their bulletproof formula of being hectic and punishing.

The third track was All the Better to Eat You With and I would call it twisted warped knuckle metal….and utter drum and vocal violence. This was quite Blood Duster with its gory tone and intent.

Now, these tracks are all ragers, but nothing different from previous releases but the difference is from track four onwards.
Crushing Heavens Mandate showed some variation between the MMA style death match violence, quite thrashy in parts in the style of say peak Kreator etc.

Number five was Harvest of the Skulls and this shows a more slight moody tone and is one of the more diverse tracks on this barbaric album. The build-up was excellent and sets everything up for a less obvious style and focus.

This dripped in atmosphere and skill, still totally psychotic, but with a more balanced delivery.

Tracks 5-9 are the killer section of the album. And that's a fact.
Oedipus Tyrannus piles on the ugly Deicide homage and chokes the fuck outta you. This is the sensationally savage peak-level brilliance that this band are super skilled in.

Track 7 is the Nuclear Family Holocaust which of course sounds as abrasive as the title and has clever build-up and a decent creep factor. There is tons of tangential brutality on this one and this is a fave.

But the best is Pride and Extreme Prejudice (what a title eh!) is where the band shines or comes to their own or whatever cliche you can pick, it's a raging ripper. This is brutish glory and despite these fuckers being apelike, this is well-written and intelligent song crafting.

Watch your Mouth is the last track. This showcases how the better tracks are most definitely contained in the second half of this release. This is total classic death metal, with some sprinkles of tech death metal but the unhinged brutality always dominates the tone, but it surprising has some fucking cool whispered vocals, but this ain't a weakening of the formula. No emotive shit on this banger.
Recommended highly and you know these bastards probably have five more albums of this insane and bloodthirsty shit to come.
Buy it now:
https://werewolvesdeathmetal.bandcamp.com