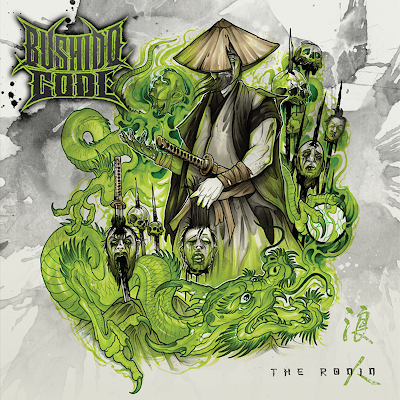 Bushido Code epitomises all that is heavy and accomplished in modern hardcore and they have steadily built their profile with each release. The previous two eps were classic and very much metallic hardcore with enough thrash metal to win over any listener. But now they just dropped this release and even as a huge fan of the previous two releases, this beast fucking blew me away. The Ronin is a modern hardcore masterpiece.

The Ronin consists of nine sensational tracks of hardcore that is seriously underpinned by solid metal/crossover influence. I have noted some reviewers of this band have pegged Bushido Code as a mostly metal band, but I think the foundation of the sound is definitely hardcore. Vocals and the aggressive overall tone stems from hectic and brutal hardcore. This is evidenced by the band members history in quality bands and the metal influence is an absolutely positive one. The riffs are caustic as hell and the groove is there throughout this release. They achieve the perfect mix of this style as evidenced by previous greats such as Sworn Enemy, All Out War and Earth Crisis.

The album works so well because everything works and fits well. Take the title track opener, it draws you in with its abrasive tone and rhythm/riffs/vocals/lyrics are all sensational. The lyrical concept of the album is of the story of a ronin, a lone samurai called Da Shi as he seeks the ultimate sacrifice, death, in honour and in loyalty to his master. As a concept album and when you listen intently to the lyrics; the whole album just explodes with vicious intent. Aftermath continues the dynamic and bleak type of emotion being predominant across this album and it's a vigorous second track full of chunky riffs. Stench of Cowards Rot has a brilliantly timed pace and the almost death metal lyrics work well with nasty riffs and the track comes across like a Cannibal Corpse meets Hatebreed gem. And the slowed down middle part is an album highlight. Relic of War, utterly stamps it's authority by the fourth track how essential this release is and this track gets bigger and bigger as the song goes on. Some pretty nice Slayeresque guitar worship in here as well. And those gritty lyrics, fucking wow!. Killer instrumental Prelude to Battle leads brilliantly into 1600, which is wild because it strikes a perfect balance between being heavily melodic and grim as hell. This just shows the talent on tap from this unit and I loved this difference from the first four tracks. These fifth and sixth tracks, give you a very brief chance to breathe, before the next thunderstorm that is approaching. Then Harvest slays you within about three seconds. This is my favourite track by a mile, the pace is perfect and reminds me a heap of the best Ringworm tracks ever dropped and it also has a nutso solo at the end. And then when you think, the album has to taper off; you get two awesome tracks that were for me their best tracks off those past ep's. Loyalty is dripping in Slayerlike riffs with some of the heaviest lyrics I have heard in ages, check this:

Here they come hold your breath
The killing fields are lit red In the mud, face down
Paralyzed, by the sound
Of your brothers being ripped to shreds
Look to the right he’s already dead
Here I am, all alone
Scared to death, I will fight on
and as a wickedly stunning closer is the epic Benevolence, which is gratingly intense and has the best closing breakdown for a album I have heard in ages. All in all a stunning album of depth, yet scintillating brutality. In a very short space of time this band have made their mark and demand your time.
Watch this:
https://www.youtube.com/watch?v=741OZv3hGMI
Buy the release here:
https://upstaterecords.bandcamp.com/album/bushido-code-the-ronin
Anti-socials:
https://www.facebook.com/bushidocodemetal
And now the wicked interview with Mike who produces those mad arse vocals for the band.
Entertaining interview, very honest and genuine answers as expected.Enjoy!!

Fuck me The Ronin album is amazingly sensational in its content, it is heavy in terms of harsh musicality and is epic storytelling. Tell us how the concept come about?

First off, thank you!! We wanted to bring back what we loved in the bands we grew up with. Cool epic album covers, and crazy story lines mixed with brutal metal. Derrick came up with the name Bushido Code from one of his favorite samurai movies Shogun Assassin. And when I heard the name I was like “guys i got this great idea” The rest of the band just starting throwing out ideas and we were off and running.

Give us all the background of the band from the very start to now and tell me what are the aims of this band. And of course, your influences, both time-wise and most prominent for you as music fans, because Mario said you are huge music fans.

The band was started in 2017. But our friendships go back way further than that. We all played in a bunch of different bands in the hardcore/metal scene. Bands like In The Eyes Of, Fury Of Five, Nourish The Flame, Choose Your Weapon, X Represent X, and Dementor. Playing shows together and building a brotherhood that is unshakable. Derrick hit me up and said “well got this band i want to do, and this will be the last band i do” He put me in a corner, I had to get in on it. He said he had songs he had been working on for years. So he sent them to me and I was like “OK we are playbig 90s thrash, sick” But when we got up with Rocco, Shaun, and Kyle it turned into something more. Naturally it has the influences of the bands we grew up with like Death, Metallica, Testament and At The Gates, but also has the hardcore elements that brought us together like All Out War, Buried Alive, Earth Crisis. Mario is correct in that we are huge music fans and like Derrick says we are more like a Hybrid Metal band. Taking all these elements and making something a little different.

What is it about Japanese art and culture that appeals to you, as it lyrically and art-wise is a huge part of the band’s identity and is done so fucking well.

We all grew up in the hardcore scene, So in-turn we grew up in the tattoo scene because they are very intertwined. I mean, Derrick our guitarists and band founder is an amazing tattooist. So thats where our love for the art began but through that you start to learn about this amazing culture. Beautiful, but Violent history. But the history that the Japanese culture has mainly that of the samurai is quite amazing. The bushido code itself the code of the samurai is something that was taken so seriously that it was put before their own lives. I mean it doesn’t get harder than that. Through that respect we grew this story out of it this Ronin samurai Da Shi, who can’t find a worthy challenger to help him achieve death. Man, just the thought of that makes me think that he is a scary individual. And then it’s brought to life through Derricks great art work. 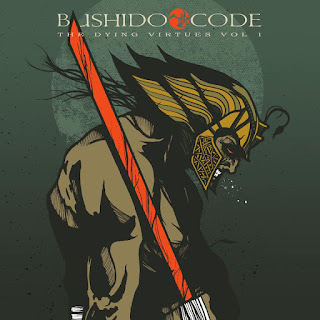 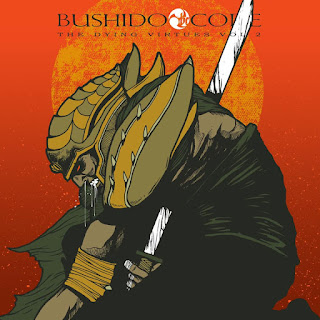 Live pre covid, how was your music received on the stage?

We strive on playing well live, we make a point on sounding good and professional. But, we also were playing a lot of hardcore shows. So we would play and everyone would just stare. We would get done and were like ‘well they hated us’ Then everyone would walk up to us and say “you guys were sick.” I was like “funny you guys were just starting at us!” Most would say they just wanted to watch us play! I guess thats good.

What’s coming up next on the agenda and what are the long term plans?

After the album comes out on April 16th and the world opens up, we plan on playing as much as possible. With our new deal with Sronger Bookings we will be trying to make our way to Europe and tour around the US as much as possible. But until then, maybe another video or some live streaming stuff. Just anything we can do to keep you all paying attention.

Lyrical content is extremely important to many fans of hardcore/metal, what does it mean to you? What band’s lyrics resonate with you?

As a singer, lyrics mean a lot. I mean, I like some bands that I’m not really into lyrically. But the bands that I love the lyrics of are the ones that mean the most to me. When I was a kid there was a Suicidal Tendencies song that kinda saved me from extreme depression. Made me feel like I was wasn’t alone in a world where I felt so different and extremely alone. Thats when I realized the power of lyrics. And I had to give that back to the world. There’s really too many to list that have shook me to my core.

What are some of the highlight’s and lowlights of the band so far?

I would say we are on the biggest highlight so far with the promo run for the record and response so far. when we were in the studio we thought we were really onto something. But to put it out and hear people we respect telling us it’s great and people wanting to hear more and follow us on social media has been amazing. The lowest part has been covid, we all live very far apart. I live in North Carolina, about 8-9 hours away from the rest of the guys who live in Pennsylvania, and they are about 3 hours apart from each other, so playing is the only time we hang out and we love being around each other.

Music is never a full-time job for our genre of music, what do you fuckers do outside of the band?

I am in telecommunications

Derrick is a Tattooist

Shaun works at a glass plant

Rocco and Kyle work in sales

Not too glamorous, but we are blue collar as hell.

What band’s jump out at you at the moment?

Lionheart, Departed, Gloves Off, Steel Nation, Jungle Rot, The Haunted, Z9- be on the watch out for that! 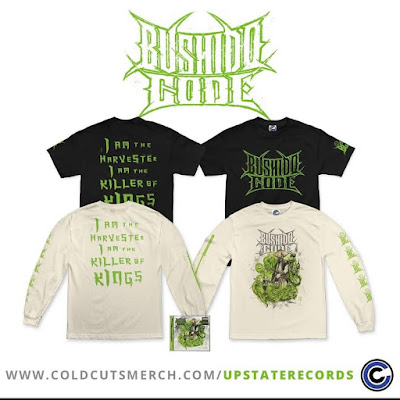 Cheers for the interview-any final messages and words of wisdom?

And I’ll leave you with my favorite movie quote

“Yesterday is history, tomorrow is a mystery, today is a gift, thats why its called the present!”