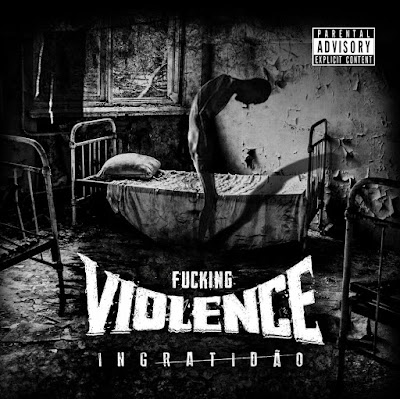 How do you view hardcore to be? personally, I think it needs to be aggressive and have a message. The overarching impact is a key factor and Fucking Violence is like a shotgun blast to your kneecaps my friends. Pure unadulterated audio warfare that will blow you across the room. San Paulo, Brazil is the battleground and Thiago is the battalion leader crushing all fake arse stooges. Heavy and hard as nails is the essence of this sensational release.

1054 records amazingly (yet no surprise with the incredible artists on their roster!!) secured this debut killer album from the boys from Brazil and that is one score. Because even the preview tracks didn't give a hint to how intense and brutal this album would be. This is the debut full-length album direct from the streets of Sao Paulo, Brazil. And we all know Brazil has always and still does give rise to the most relentless bands worldwide. 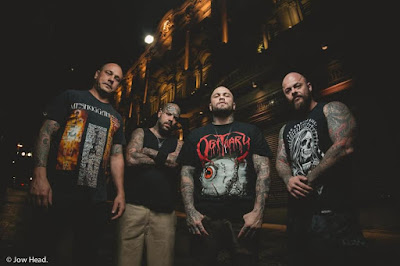 And with a name like 'FUCKING VIOLENCE you can expect nothing short of brutally violent, pissed off, in your face, riff-driven metallic Hardcore in the most purely aggressive form imaginable !! These guys mean serious business, to say the least.

Fronted by ex WORST vocalist Thiago "Monstrinho" Seirra & with an all star cast of experienced musicians FVHC intend to rise to the top of the heavy music scene not only in their native city of Sao Paulo , but right across the globe!.

The music simply does not piss about for one iota. This is 10 immensely solid tracks of the best hardcore you have heard in ages. Is anything on this album subtle-nope, is it very refined release-no chance. But it is rather, the true essence of PROPER, yes real deal hardcore and the sounds of the streets-hell yes. Heavy as a nuclear missile, yet it has groove aplenty. Def some throwbacks to classic Sepultura and even some Soulfly grooves…..so punchy, so vile. So much hunger and anger, Numb the Pain is exceptionally Biohazard as fuck, it jumps you from a dark alleyway and caves your head in and all those evil creepy moments, I just loved it. The guitar work and even the well-placed solos were sick as well and this is always complimented by so much power in the vocals, forceful and intimidating. This is the magic of Thiago- his vocals are unique and so imposing. Rare as fuck in this day and age. Respeito É Lei is as great as any top five hardcore band track and definitely reminds me of the mighty Nailbomb. The whole album is chock full of uncompromisingly balls out riffs, it's very unhinged and hectic, but the song structure and style is very focused and perfects an intersection between old school hardcore and death/thrash metal foundations. There is no oversaturation of anything, vocals never drag, riffs don't waste time the same as the breakdowns,; all well calculated.

Ingratidao is like a fucking battering ram and is so punishing in the best way. All you need is to hear two or three songs and you have completely hooked on this band. This is guaranteed!!!. And one must note absurdly great production.  Best hardcore production I have heard in ages.

I am not going to dissect the whole album, just buy it if you love heavy hardcore. 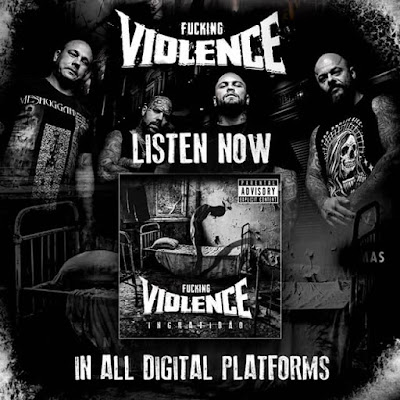 INTERVIEW WITH THE LEGEND THAT IS THIAGO FROM FUCKING VIOLENCE.

DH-I am so pleased to chat to you brother, what's news with you personally and give those that are sleeping under a rock the history of the beast that is the mighty Fucking Violence?

T-Hello Brother, its an honor for me to chat with you!
I am so glad to be working again with the thing that i love more - hardcore! And Fucking Violence is my new life, my new beginning. We have come to stay.

DH-Ingratidao your debut album that is absolutely mind-blowingly hectic and heavy, has recently dropped and is one of the best and most intense hardcore albums I have heard in ages. The production is amazing, but the energy, the aggression is so strong. What demons and messages are driving you to produce such a catharic release...because it fucking screams so much anger, pain and emotion. Tell us about some of the background to this incredible album? 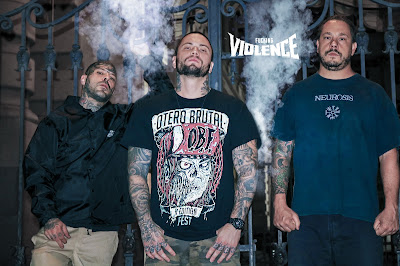 T-All the songs I write are real situations, real pain, real deceptions, and things I lived in my life, and also good things too, but all the lyrics are for real.
I have passed for a great situation of Ingratitude, because one person that I loved so much disappointed me in a way that i never expected, and it happens all the time with everyone, but for me was like a knife in my back, stab, you know, and hurt me so much that I have put absolutely everything in the songs. Human beings are sometimes so shitty, so bad, that we never imagine.

DH-Many albums have guests to fill out an album, but your guest vocalists add so much to the overall feel of the tracks, how did this come about, because the songs really delivered in a big way?

T-I always loved guests vocals, but i never did guests so much in my last band Worst. I think I was thirsty to do my job for my own.

Now in Fucking Violence I decided to call good friends that I did touring the world , like my brother Neil Roemer (Cuttthroat-USA) Laurent Styx (NFNO- France) and good friends and also giant vocalists from my country Badauí (Cpm22) and Caio Macbeserra (Project46) both from Brazil.

And for those who haven't listened to the album, first go check, then you ll see what im talking about!. 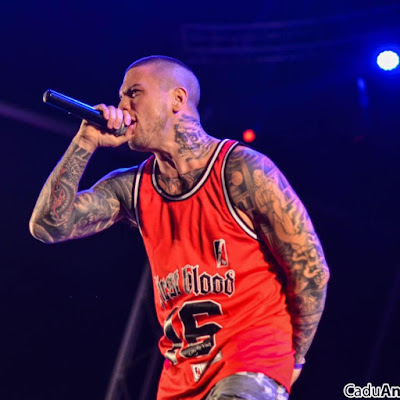 DH-How did you first get into heavy music, be it hardcore/metal etc-guide us thru your musical journey? What's bands started you off ? what bands deeply influenced you? any particular location really hit you hard, e.g. for some it's NYHC, etc

T-My mom used to play a lot of Skid Row, Guns n Roses, she played them to me. After i had a neighbor that played drums, i was like 8 years old, and every time he used to play I used to go to his house and say “ let me play”, and this guy introduced me to Metallica. Than after i started to get in love with, Pantera, Slayer, Sepultura,Obituary, Death, Cannibal Corpse and the heaviest bands you can imagine for a little kid.
Than after some years I discovered Sick of it all, Madball, Agnostic Front, Hatebreed, Cro Mags, Merauder and hardcore came into my life like a bomb!

DH-In a world of sheep and motherfuckers just hoping for social media moments, how do we seperate the real, dedicated bands from the fake fuckheads?

T-Haha thats easy, they dont last too much, they dont built real friends, promoters and bands, real fans, real people. What I love in hardcore is that most bands and musicians dont give a fuck about how many followers or how many shits you have! Is all about doing a great album, touring a lot a live with not too much, but the good to live well!

DH-Tell me about your part of the world, which has produced some incredible bands for ages, and some of your favorite bands and also the political/personal factors of the area that effect people there and in the music scene?

T-Brazil is savage, is wild, and it passes through our music. Sepultura, Ratos de Porao, Krisiun, they opened a lot of doors for people like me. We are the country of samba. The most people dont give a shit if a good band is going to play, they just care if the party is gonna have a lot of hot girls! So we play heavy music, we are the minority always.

It is so hard to do shows at mondays, tuesdays and Wednesday s here. But we always try to tour and always do an great work. But touring out of Brazil is more complete, more support, more values. 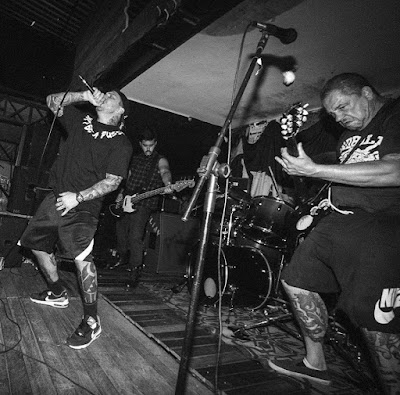 We are the country that has the bigger corruption in the world! This is a shit. I fucking hate brazilian politicians. I have wrote 3 albums talking about killing corrupt politicians, so , what I think is, any person enter in Brazilian politics to do good things, they only think about their own asses.


DH-why is hardcore so sustaining and gives so much back to it's fans, what is it that makes hardcore so great brother?

T-I think is the proximity,, the kindness, the humility, the the bands have with their fans. This makes hardcore so special.

DH-what's the plan after the killer album drops? tours, videos, tell us about how Fucking Violence will be a worldwide force?

T-Tour always. We are booking a very good tour in the United States in april, 18 shows, California, Nevada and Arizona.
Then in the summer we gonna hit Europe. I dont know what countries we gonna play, but I really want to play at least 3 or 4 weeks there.

And the videos, we gonna drop for sure. New videos are definitely coming. 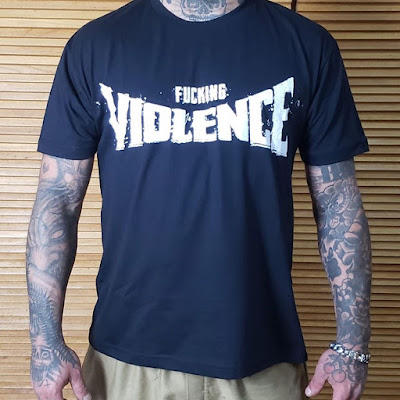 DH-The album art is incredible, give the story behind it and tell me your thoughts about how art and music work so well as a collorative force?

T-The title means Ingratitude. We started to think about what attitudes, what feelings, what decisions, how people becomes in sometime in their lifes Ingratitude. By their fault or not. Then we started to enter an idea about asylums for sick people, hospitals that we have in Brazil and here lives crazy people, and these hospitals have like 2000 people living in a space that carry only 500.

Than me and my friend (the designer of the artwork) Andre Ottoni we went so deep in this underworld amd started to draw this dark art. Music is art and art is music.

One dont live without the other. I’ve grown up seeing vinyls of the bands that I love, and I used to listen the album reading the lyrics, looking at the cover art, looking at the photos of the band. This is so special, thats what I think is a collorative force.

DH-tell me about the highs and lows of being in bands from your perspective?

T-Only highs my friend. I love what I do, I live for music and Muay Thai, I dont know how to do another thing, so for me, is my dream that I realize being here talking to you in the other side of the planet, playing in big festivals around the world, playing shows with bands that I love, that I hear everyday in my car, at home.
So only highs!!!!

DH-what's a day like as a soldier in the Fucking Violence crew?

T-The boys and the girls really live this. A lot of “soldiers” came by the “worst crew”, amd they are so in love amd crazy with Fucking Violence that makes me so happy and secure.

DH-any future collabs planned? you have done some decent ones that's for sure

T-Yeah we got some with Vitabrevis, and I am planning some new things soon.

DH-why do we need to take notice of your album and your band?

T-We are Brazilian, we have come far, I am hungry always, hungry about touring the world, give the fans always a better album, a real album, an agressive album, so true and its savage and wild!

DH-any final thoughts and messages? And thanks for your time, effort and fantastic music my friend!

T-Bro thank you for this amazing interview, your work is incredible. Wish to see you soon at the pit.

And thanks for the support, you, Peter Worral my brotha from 1054, Coretex, and all bands and promoters and fans around the world. 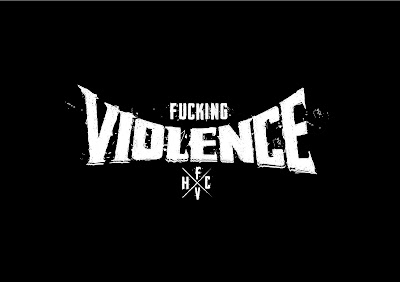