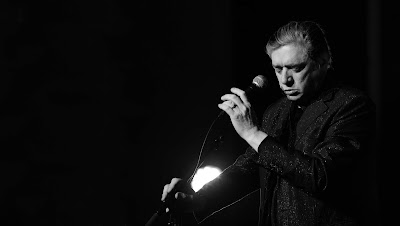 After a great night of crushing metal the previous night at the same famed venue, Hobart's glorious Odeon Theatre, I was here to witness the sheer magic that is Blixa Bargeld.

His musical resume is one to be treasured. Not only is he the lead protagonist in Einstürzende Neubauten, but he was of course in Nick Cave and The Bad Seeds and his solo collaborations have been stunningly jaw-dropping and never dull. This night was meant to originally be Blixa and one of his fine collaborators, Teho Teardo playing live, but due to health issues preventing Teho touring this was changed to tonight's excellent format.

This was an intimate where of course King Blixa held court and thoroughly entertained us with a lively Q and A session, intermixed with five beautifully interwoven songs.

There was no live band as Blixa so playfully indicated on stage; telling us where various band members including a local choir would be positioned on stage. Just the savage crooner's captivating vocals and a backing tape. But it was stellar.

Blixa was hit with a range of questions, including crowdfunding for Neubauten's previous and new releases, how easy( or rather difficult!) it is to work with artists and life as a cultural icon. He clearly and very passionately indicated his love for the art form of songwriting. He was asked about various songs and the inspiration for these; he gave us an array of spellbinding wit mixed with a real sense of being humble about his body of work. He mentioned various people he had worked with and hoped to do future projects with; including Mike Patton(please make this happen, oh please!). He touched on the unique "shrieks and yells" that has littered many of his greatest albums. He was charming and very matter of fact with not once a touch of arrogance, despite the depth and extensive masterful albums he has constructed.

And then, of course, his magical voice. As touching and hypnotizing as Leonard Cohen, this added delight to a truly entertaining night. He delighted us with a yet to be released and finished Neubauten track with sounded mesmerizing even in its infancy as he indicated. Also some outstanding songs from an array of seductive collaborations, including one in Italian (he noted that he was fluent in German and English, and faked the other languages he occasionally sings in). I loved that he did one of the Teardo songs that many fans worship; A Quiet Life and it was amazingly entrancing given it was just a musical legend and a backing audio loop.

Indeed, as Blixa indicated it was a last minute event to make up for an unfortunate illness of one-half of one of his projects; but I found it so fascinating and felt the urgent need to listen to all his musical works. Blixa you are one in a million and we felt privileged to spend an intimate evening with you.