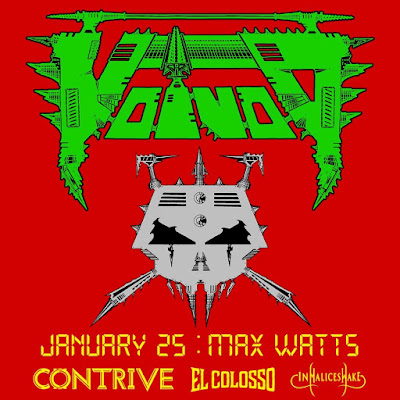 To say this writer has been waiting for this gig in anticipation is a massive understatement. I have loved this band for ages and always enjoyed their masterful craft. Reinventing their sound, but always remaining Voivod.

Unfortunately, I missed the support acts due to family commitments, but my colleagues told me particularly that In Malices Wake were exceptionally well received.

Now on to the space punk metal gods. An eager crowd applauded Voivod who with an apt futuristic sample burst into Post Society, followed by Ravenous Medicine; that's one heck of a set starter. This band is exceptionally well skilled and balanced in their performance, each member plays a clear role, but the teamwork and camaraderie shine so damn brightly.  They have the tunes, the skills and they don't take themselves too seriously. The jokes and laughs they provide were excellent as most bands of this age exhibit enough arrogance to make you think great albums, but the band comes like a pack of tossers. Not this band. 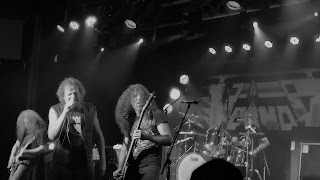 The whole set was full of old gems like Technocratic Manipulators, Into My Hypercube, Order of the Blackguards mixed with the ripper current album The Wake, This worked perfectly, no real lulls and this all built towards an amazing end that saw them play Voivod, followed by an incredible encore of Overreaction and the best Pink Floyd cover ever, Astronomy Domine.

I expected to enjoy the gig, rather than be blown away. Stupid me. This was an awesome gig for the ages and afterward, the band mixed freely with the crowd and were chilled, chatty guys who really loved the tour and the crowd reactions.

Cheers to Ben and DRW for the gig access.