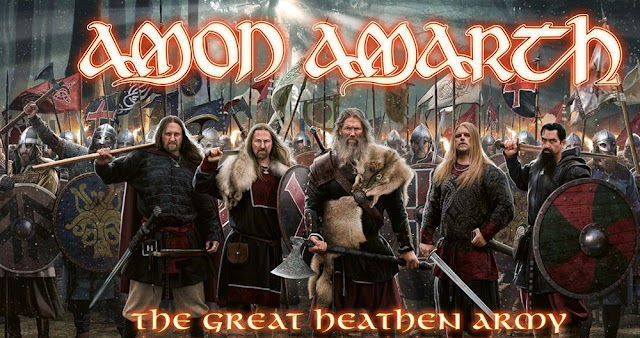 Unable to properly tour in support of their previous effort 2019’s Berserker due to the pandemic, Viking metal legends Amon Amarth have recently been busying themselves with creating what is yet another astonishing record The Great Heathen Army. The record is a rich, brutal and melodic mixture of the band’s signature brand of Melodic Death Metal. Jam-packed with all the tricks and tropes we’ve come to love and the band has come to perfect over the years. With perhaps the only notable omission being “Put Your Back Into The Oar”, a monstrous number they released (as what is now evidently a stand-alone single) back in February.

The record is a first for the band, as it is the first of their records that the band actually appears on the cover of. This change has not diminished the power of the imagery one iota. Amon Amarth usually opt for a painting visualising the title of the record, and this album is no different. The band’s physical appearance blends almost seamlessly with the rest of the (painted) titular Heathen Army depicted on the cover, standing proud and looking every bit as intimidating as a Viking army should.

As for the record itself, in order to cover the most ground, in the most depth, I thought it best to break down my thoughts track by track (in running order) for you reading this. So without any further ado:

Get in the Ring:

The intro, consisting of sharp and menacing guitars, is a phenomenal way to open the record. It certainly does the job of announcing the band in a powerful way. However, from there on out the track descends into something of an uncharacteristically uneventful piece. Great beer drinking music, but not properly hooky enough to interrupt you from said beer. More than anything this song feels like it should have been a non-album single. One they were possibly recruited to do as a WWE wrestlers intro and that perhaps got shoehorned onto the record by the label for publicity. A potential point made all the more obvious by the song’s early release and their employing of an AEW wrestler to feature in the song’s music video. Not Amon Amarth at their best but a perfectly acceptable start to this overall marvellous album.

The Slipknot-esque chugging in the intro with a quick switch in picking pattern makes way for the trademark Amon Amarth style, which in turn, builds the tension supporting the narrative in verses. The lyrics are written from the perspective of an Englishman during the 865 invasion from the coalition of Vikings known as the Great Heathen Army. The melodic guitar lick in the chorus really sells the blind panic and stress of war (described in the lyrics) in a mesmerising loop. The lick from the chorus is reprised in the short bridge to the final chant of “Hail to the Great Heathen Army” reinforcing the might of said army they are trying to portray. This guitar lick motif is then deconstructed into a few melodic runs, changing the feel just enough to signal forth the outro. Unequivocally, and as the title track fittingly, one of the highlights of the album.

The spiritual successor to the 2016’s Jomsviking classic “Raise Your Horns” with an even heavier emphasis on Norse mythology. Where “Raise Your Horns” focused on toasting those lost in battle, this track focuses the lyrics on Heiðrún, a goat whose udder produces mead for the denizens of Oden’s beer hall in Valhalla. Musically, the verses and chorus takes a leaf out of Iron Maiden's book (not the only example of this on this record), with a riff that somehow evokes a sense of loving sentimentality that drives home their passion for the titular topic. It switches to a more folky feel in the bridge after the second chorus, especially when the second guitar's harmony (possibly a keyboard part) kicks in, lending it an almost Hurdy Gurdy quality. The bridge of the track contains an Amon Amarth staple, that of the gang chant. Something that always serves them well when it comes to audience participation. “Who's the goat, who’s the goat, Heidrun! Heidrun!” a clever play on words owing to Heiðrún being a goat and the more modern “greatest of all time” acronym. With all the hallmarks of a legendary Amon Amarth song this is easily my favourite from the record.

Oden Owns You All:

A much more Thrash/Old School Death Metal approach than we’re used to from Amon Amarth. The furious double bass drums kicking along like Dave Lombardo playing “Angel of Death” and tremolo picking to match really brings the track to life. Great to see them branch out a little farther than their usual Viking Metal style, but it does make the lyrics harder to hear clearly. With lots of brutal lows and no easily chantable lines, it very much contrasts the previous track. It’s still a great song, just not my personal favourite. 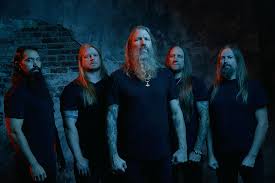 Find a Way or Make One:

This is the track “Get in the Ring” should have been. A much better fighting song and a fucking belter from top to bottom. Right from the first verse the lyrics set the tone with a message to stand your ground and find a way to victory at all costs. The truly triumphant chorus and post-chorus hosts all the melodic trimmings of classic Amon Amarth. Although far from revolutionary in terms of their sound, this type of song is the reason you listen to them.

The closest the album comes to having what most would rather derogatorily call a “deep cut”. Not their most impressive work, however, the song is saved by a nice folky acoustic reprieve which leads effortlessly into a repurposing of the chorus riff. This makes for a refreshing instrumental bridge, breaking the song up just enough to keep it fresh. Rather than bombarding us with the chorus one time too many. All told it's just another traditional Amon Amarth track.

Classic New Wave of British Heavy Metal (NWOBHM) vibes with a modern Nordic touch. A nice balance of both styles expressed most notably via the driving groove of the intro/post
chorus; guitar picking matching the bass drum line, something many modern Nordic bands do (think the intro to “Bodom Beach Terror” by Children of Bodom) as well as the old British guard (think the intro to “Where Eagles Dare” by Iron Maiden). This is apt as this song includes a guest appearance from the frontman of NWOBHM legends Saxon, one Biff Byford singing a verse from the Anglo Saxon perspective and Amon Amarth’s frontman Johan Hegg singing from the Viking perspective of a war between the two. The third verse sees the two frontmen dueting in a call and response style. Their differing styles compliment each other well.

Amon Amarth’s penchant for Iron Maiden (as documented in their 2018 documentary The Pursuit Of Vikings) is on full display on this track. The guitar solos really sell the NWOBHM feel, guitarists Olavi Mikkonen and Johan Söderberg had clearly been marathoning Maiden’s 80’s catalogue in the week leading up to them recording the solos for this song. With elements reminiscent of both Dave Murray and Adrain Smith’s soloing style present in the frenzied cyclone of shredding. Another blistering track, although sadly one audiences are unlikely to ever hear live, unless they do a tour with Saxon. All of this adds up to make, what is by far the most convivial song on the record.

Another genre experiment in the intro to this one, this time a Metalcore feel very redolent of Deep Blue era Parkway Drive. This similarity to Deep Blue and the lyrics allusions to the legendary 10th century warmongering Viking Chieftain Skagul Toste conjures images of a longship adrift in a thunderstorm on a choppy north sea. Sailing toward certain victory in a raid against some unsuspecting East English hamlet. At least for me, it does. Musically the Metalcore tropes peppered throughout the song melds with Amon Amarth’s vikingy groove beautifully. Hegg’s brooding vocals counter the guitar melodies in a more pronounced manner than is typical for Amon Amarth, and is all the better for it. The two-part guitar harmony that leads to the all too brief breakdown (about two thirds of the way through the song) is a particular stand-out. I hope they explore this Metalcore/Viking fusion more in future.

With a much slower tempo and very sinister tone, this overly atmospheric piece really catches your ear. The guitar layering in the riffs give the impression of a symphony orchestra at times, affording the track some real grandiosity. The vocals and the scale they're playing in are classic Amon Amarth, but it feels more like a Second Wave Black Metal track a lot of the time. The ominous colour of the song suits the tone of the lyrics perfectly, Hegg literally walking us down the trail that leads to the Gjallarbrú, a gold encrusted bridge that crosses the River Gjöll. This is the entrance to the underworld realm of Hel in Norse mythology. Altogether the song serves as a crushing and fittingly brutal conclusion to the record. Undoubtedly another highlight.

All things considered, despite a modicum of dud moments, The Great Heathen Army is a spectacular addition to the rather full plumage of feathers in Amon Amarth’s already quite impressive cap. A medley of classic Amon Amarth Vikingy greatness with a smattering of genre experimentation be it Folk, NWOBHM or Metalcore. Every journey the individual songs take you on flawlessly round to the album's uniform whole of vibrant melodic brutality.

This seems to be becoming par for the course for Amon Amarth, and all the power to them and their continued success. The Great Heathen Army is definitely worth many a listen or better yet, a vinyl purchase as I just did. To Amon Amarth, I say bravo and skál you beautiful Swedish bastards.