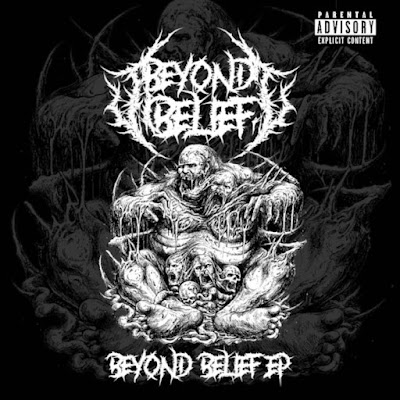 Beyond Belief-S/T EP review By Mark Jenkins. FFO: Brutal Beatdown masterpiece. This was a cool unexpected surprise, but not really given the pedigree of 1054 records.

BIO:
BEYOND BELIEF is a 3-piece collaboration band made up of UK & US-based members bringing the sounds of Brutal Slam with a touch of Death Metal, crushing Beatdown breaks & even a hint of Hip Hop !!!


This debut self-titled EP is a strictly limited edition of 100 x digipack CD's so get in quick before they disappear !!

This solid EP is excellent from start to end, it just hammers hard with its mad beatdown/slam hardcore intensity. Pig growls, mad samples, machinegun guitar-work and utter warlike drumming from hell all make up this killer project. No second is wasted on this at all. For something so savage it's a well-thought-out release with clever interludes and outro to make it almost storylike; in a macabre horror film style. Cut you First is gnarly as hell with an intense sample and pulverizing riffs/drumming that completely knocks you for six and the death metal-like growls are a huge highlight. And this aggressive EP has only just begun its serial killer intensity. The s/t track is mad as hell as well, it's like Death Thrash with a sizeable groove and momentous tempo that drifts into a crazed breakdown of massive quality. Break You is an interlude, but don't expect much mercy from this excellent third track. This leads into one of the best tracks, Bullet In Your Back which is almost like Knuckledust crossed with hip hop, but in a hectic way. This bounces and moshs very hard. Putrid is next and just builds on the psychotic dynamics of this release. Beatdown can be awesome, but particularly some European versions of it are dull as fuck. BB do this style so confidently and everything is so well placed. This adds to the list of classic tracks on this EP. Deaded is similar to that objective and the tone of this just floored me. The cool thing about this track and the whole release is its basic music punctuated by amazing song structure and musicianship. Hope this band does this stuff live and definitely I am hoping for a full album of this glorious audio slaughter.