With the Rats and Snakes and a Touch of Snake Oil: A Primitive EP Review: By M H Thomson 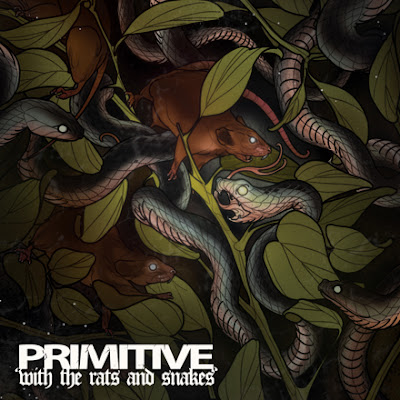 With the Rats and Snakes and a Touch of Snake Oil: A Primitive EP Review:

Groovecore, if it's a genre at all, is a relatively uncommon one, blending the Groove Metal sensibilities of Lamb of God, DevilDriver, and Pantera with the modern Metalcore stylings of Parkway Drive, August Burns Red, and the like. The only time I regularly refer to this moniker is when describing the swing of the Flemish outfit Spoil Engine to people. Primitive’s sound promises and well and truly delivers on living up to this genre’s title. It all certainly sounds the part, however, the results of their most recent endeavor in the recording studio (an EP called “With the Rats and Snakes”) regrettably leave a bit to be desired.

The short intro song “Curse” that opens the release consists of a foreboding acoustic guitar melody that steadily builds to a crescendo of white noise. The eerie, almost medieval tone the band was clearly shooting for was lost somewhat when I realised what it reminded me of; a Nintendo game, one I can’t quite place, be it Luigi’s Mansion or something from The Legend of Zelda Series, overwhelmingly the atmosphere this song exudes is that of a Nintendo game castle basement level. Nonetheless this is still a fun and intriguing way of opening proceedings.

The title track opens with a powerful riff that sounds like it's been lifted straight off Lamb of God’s Ashes of the Wake (as is the case for multiple riffs in this tune). But the hectic dual guitar harmonies quickly draw the song into familiar metalcore feel that ushers in the first couple of verses. This gives way to a flurry of sweep picking that kicks off a brief, ferocious and virtuosic guitar solo, which then leads back to another powerful couple of verses. The lyrics themselves tell a story of rats and snakes rising to overthrow a throne; this is presumably a political metaphor. The actual vocal performance lacks a little dynamically but more than makes up for it with its sheer power. A long but welcome breakdown then commences, the galloping, rapid-fire guitar drills with a tone very reminiscent of Gojira. This blends perfectly with the melodic guitar runs that are introduced halfway through. Following that, a gang chant of “Rise, rise” and yet another melodic flourish draw the breakdown and the number neatly to a close.

If the Lamb of God vibes weren’t already apparent, they are now, the EP’s third offering utilising a shared title “Broken Hands”. Though the actual track starts us off on rather a different note. The first image that came to mind upon hearing the intro was that of the cover of Leviathan by Mastodon. But the American Groove Metal stylings are not left abandoned for long as the song gets going it makes a comeback. This track follows in similar footsteps to the previous one, with lots of brutal screaming, fast melodic guitar parts, and triplet gallops, this time the drummer joining in on the galloping via this bass drum(s). Hard to comment on the lyrics without a lyric sheet, as the single “With the Rats and Snakes” is the only one with lyrics available as of writing this. All told another banging track, really reinforcing through reiteration what Primitive’s sound is all about.

The fourth song titled “God Is Beneath Us'' is where I started to lose my patience with this record. The stylistically different and interesting intro song is cool, then the first song hits as a breath of fresh air, brutal and musically speaking, technically brilliant and impactful. A second song follows in a similar vein, that's fine, it’s just their style, but once this song commenced it became abundantly clear to me that all of their songs just sound the fucking same. Very little in the way of new ground is broken in this tune. The distinct lack of variety in style and feel in this song and the two that follow is rather a disappointment. Their genuinely promising start takes quite a turn for the banal at this point. 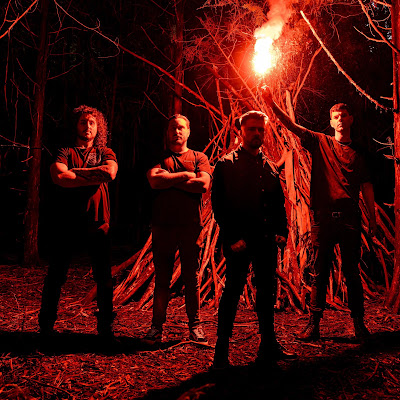 “Rivers” sinister intro initially promises a change of pace but that optimism is quickly dashed. More of the same relentless Parkway worshipping Metalcore melodies blended into a Groove Metal backdrop. The song’s far too brief experiment with a Randy Blythe-style whisper effect on the vocals is drowning in far too much reverb and dies in the arse altogether when you realise the lack of space the surrounding instrumentation affords it. At least the music builds in intensity alongside this verse. Their attempt (albeit a valiant one) at a stirring, more emotionally evocative outro is squashed by a return to their persistent triplet chugging form for the song's actual coda.

The EP’s final number, the aptly titled “The Last Nail” furthers the record's descent into the doldrums by opening with a very similar sounding intro to the one found in “Rivers” that oh so briefly promised some variety. I did have to laugh when I picked up on the pre-chorus lyric “Hell is now, Hell is free”... indeed. As the rest of the song is unfortunately much of a muchness with all the rest of this EP.

This was my first foray into Primitive’s music, and I would have been delighted to say I am more than impressed if I’d only heard the title track. Their melodic sensibilities and brute force put me in mind of some of my fonder memories from my senior year of high school. That of blasting Lamb of God and an obscure Swedish Metalcore band called ThisIsNotAGameOfWhoTheFuckAreYou (yes that's the actual band name). As such I was really hoping this EP would serve as a statement of the arrival of truly great Groovecore in the Melbourne scene, alas I was left bitterly disappointed. The repetitiveness and lack of dynamics really kill this record, be it the fault of the musicianship or production or, at times, both. Regardless of this I still think Primitive would be an amazing act to see live, if only for the pure, infectious and energetic moshablility of their music. So at least there’s that to recommend.